AGAINST ALL ODDS — FIGHT THE GOOD FIGHT 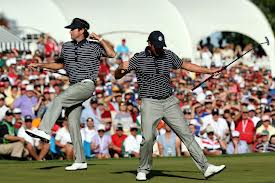 Let’s begin with an excerpt from a song by Phil Collins :

“Take a good look at me now,
‘cos I’ll still be standing here
And you coming back to me is against all odds
That’s the chance I’ve got to take”

This is about the best I tune can offer to describe Team Europe on Day 3 of the Ryder Cup. It was like the European Team singing to the Ryder cup. It was as if they are declaring they will stand their ground no matter what and wait for the trophy to come back to them.

Previously I have written about the phenomenon of recovery, of how temperamental it can be, but the topic deserves another approach now. I’ve also written about overconfidence or severe lack of it, but it needs another writing now as well. Team Europe staged one of the biggest comebacks in Ryder Cup history at Medinah, outside Chicago. Or as others would put, the biggest choke, the biggest collapse (by Team USA) in Ryder Cup history – perhaps in the total history of golf. Making this more painful for Team US was that this was a collapse committed by them and they had the hometown crowd on their side!

The Ryder Cup, started in 1927, is a bilateral, biennial golf tournament meant to match the best golfers from Europe against the USA in a tough three days of match play tournament.

The story this weekend was that Team Europe, playing badly in Days One and Two, was down 10-6, coming into the last day of single Match Play games on Sunday. USA needed to win a mere 4 ½ points to win the Cup with Europe needing to win a daunting 8 points. At the end of Day 3, Europe did indeed win 8 matches on that Sunday, mainly on the 17th and 18th holes. Europe won on the last holes of the last day leaving the American golfers wondering what happened.

These had uncanny tempting allusions to the Brookline, Massachussets, Ryder cup in 1999 which was then known as the greatest comeback story in Ryder history before the events at Medinah. There, it was the Americans, then on home soil, who rallied on to win the Cup. Why this comeback at Medinah is so special is that it was the visiting Europeans who bravely fought for every point against the cheers (eventually silenced) of the home crowd. One ESPN commentator has already written off Team Europe 2012 as losers in his column. His prediction now counts as one of the “Worst Predictions in Sports Writing History”.

There many themes and sub-themes to this epic win by Team Europe.

Recovery: Golfer Walter Hagen once said “Golf is a game of recovery.” Europe recovered this one big time. They knew that despite the odds, a win was still possible. . . but only if they played well and or America collapsed.

Humility/Acceptance: See the song lyrics again at top of this article. Europe knew the odds at the end of Day 2. They accepted and faced the odds, but they still played their best. This perhaps was shown by Luke Donald’s relaxed win over Bubba Watson in Hole 1. Perhaps calmed down by acceptance, they were less tense, smiled more and had a bit more fun.

Redemption: European Team Captain Jose Maria Olazabal was on that heart-broken losing Team in Brookline in 1999. For him, this was redemption . . . and closure. He was with Seve Ballesteros on that team.

Unity: The hero of the first day was Belgian Nicolas Coelsarts. Day 2 Hero was flashy Englishman Ian Poulter and the Day 3 hero was German Martin Kaymer. A different nation taking the cudgels for Team Europe for each different day. And that is what European Golf is all about. A brotherhood of golfers that transcends national boundaries. The team inspiration was Seve Ballesteros from Spain. But it mattered not from where he was. All nationalities used his achievements as a rallying point. 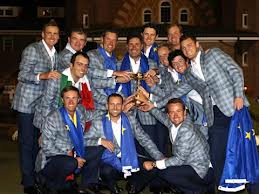 Endurance and Perseverance: 2 Timothy 4-5: “But you must be clear-headed about everything. Endure suffering. Do the work of an evangelist. Devote yourself completely to your ministry.” They let neither the cheers of the opposition hometown crowd nor the odds of winning discourage them. 2 Timothy 4:6-8 “I have fought the good fight, I have finished the race, I have kept the faith. . . . the Lord, the righteous Judge, will award to me on that day—and not only to me, but also to all who have longed for his appearing”. They finished the race to the very end. Louder cheers do not equate to an automatic victory. Europe won the game mostly on the finishing holes of the finishing day because they fought to the last hole of the last day.

Finally they had Inspiration: the late Spanish golfing great Seve Ballesteros. Our Lord Jesus Christ, even whilst resurrected, is no longer with us physically yet his memory always serves to inspire us forever. He does not have to be here to inspire. The thought, the inspiration of a departed Seve Ballesteros as a team inspiration mimics this in a non religious way. The rallying symbol of the Europeans was not the circle of Stars on Blue but the silhouette of the Seve’s iconic victorious fist pump pose at St Andrews.

“For Seve” was almost a constant battle cry for the Europeans. The team wore Seve’s favorite white shirt and navy blue pants on Sunday.

I have not detailed how the Americans collapsed on this weekend but the internet material is aplenty. Focusing on the issues like courage and perseverance is the more positive approach. The Cup goes back to Gleneagles in Scotland, “the home of golf.” Perhaps for Europe to show how and why it has won 6 of the last 8 Ryder cup tournaments.