The Brotherhood of Christian Businessmen and Professionals (BCBP) is cognizant of the pressing needs of the Army Station Hospital, 4th Infantry Division in Camp Evangelista due to the ongoing armed conflict in Marawi City. Many wounded soldiers who are airlifted from the war zone are treated here. Hence, four (4) units of brand new Samsung Refrigerators were donated to the hospital for the storage of medicines and other medical supplies. It is hoped that these units will greatly benefit the wounded soldiers who really need immediate medical attention. The 4 Refrigerators were each distributed, for exclusive use, to the following four (4) hospital departments: Emergency Room, Military Ward, Annex Ward and Dependents Ward. 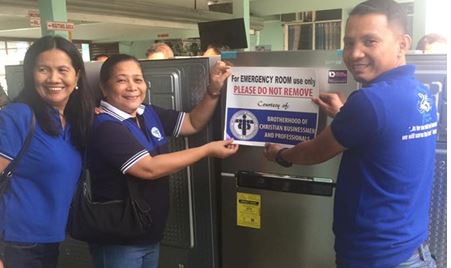 Lt. Col. Jonna D. Dalaguit, Commanding Officer of the hospital and who accepted the donations in behalf of the Camp Evangelista Army Station Hospital, expressed gratitude to the BCBP for the timely donation. This generous act of the BCBP, she said, will surely inspire our soldiers to work more and dedicate their lives, for love of God and country.

THE PARABLE OF THE SOWER AND ME

LAIKO STATEMENT ON THE SPATE OF EXTRA JUDICIAL KILLINGS