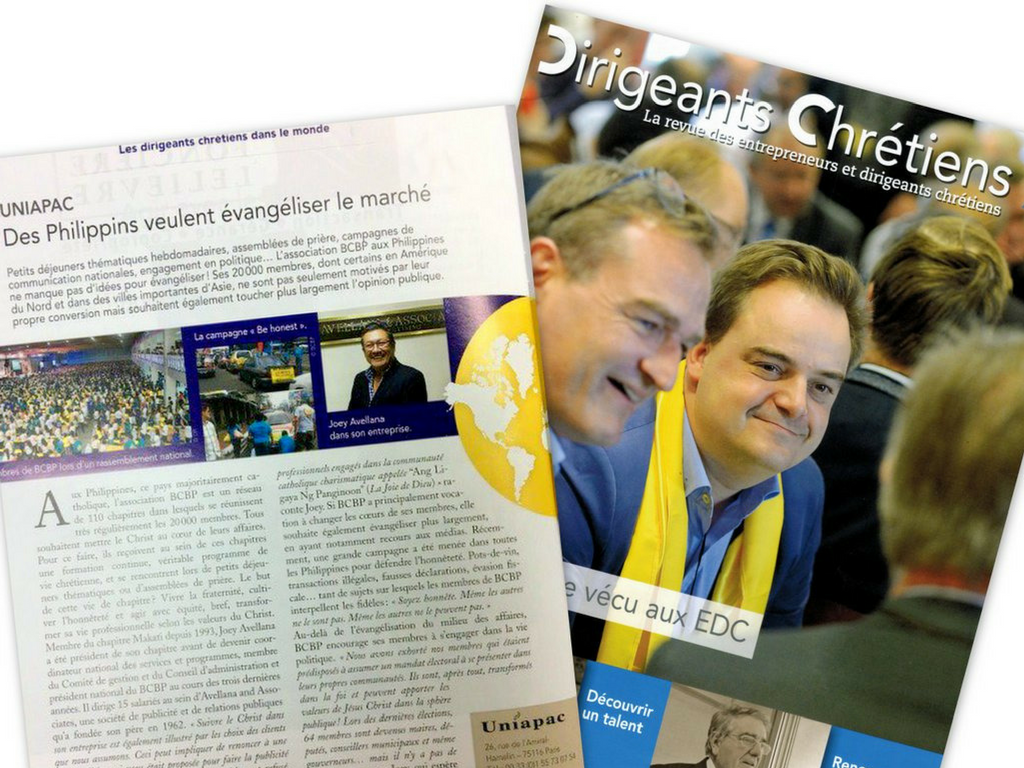 The Brotherhood of Christian Businessmen and Professionals (BCBP) was featured in the recent issue of Dirigeants Chretiens, the French magazine of the International Christian Union of Business Executives (UNIAPAC).

BCBP former President Joey Avellana informed the BCBP Kapatiran that Dirigeants Chretiens, or the Christian Leaders magazine, had a one-page feature about the BCBP, extolling the organization for its innovative approaches to evangelizing business executives not only in the Philippines but in many parts of the world.

“Breakfasts, weekly sessions, national communication campaigns, political engagement … The BCBP in the Philippines has no shortage of ideas to evangelize! Its 20,000 members, some of whom are from North America and major cities in Asia, are not only motivated by their own conversion but also by their desire to reach more,” said the article in French.

The magazine noted the BCBP’s thrust of promoting fraternal love among its members and cultivating honesty. “In short, the BCBP wants to transform one’s professional life into the values of Christ,” the magazine said.

Bro. Joey was cited in the article as an example of how a business executive has been transformed by Christ through the BCBP. A BCBP member since 1993, he became a Chapter Head of the Makati Chapter and later on National Service Coordinator and National President of the BCBP.

As a professional, he leads 15 employees at the Avellana and Associates, a public relations company founded by his father in 1962. His faith in Christ is reflected by the choices he makes — like giving up a big business that was offered to him to promote a contraceptive product. “We refused the business because it was inconsistent with our belief system and values,” Bro. Joey was quoted by the magazine as saying.

The French magazine also traced the BCBP’s humble beginnings — from the small group of 12 men “like the 12 apostles!” to what it is today.

Also mentioned in the magazine is the BCBP’s policy of encouraging its members to engage in the country’s politics.

“We encourage our members who are predisposed to assume an electoral mandate to present themselves in their own communities, who are, after all, transformed into the faith and can bring the values of Jesus Christ into the public sphere. We had members who became mayors, deputies, city councilors and even governors … but there are no senators,” the magazine quoted Bro. Joey as saying.

The magazine is circulated among UNIAPAC member organizations all over the world. UNIAPAC traces its beginnings in 1931 in Europe as a non-profit organization with headquarters in Paris.