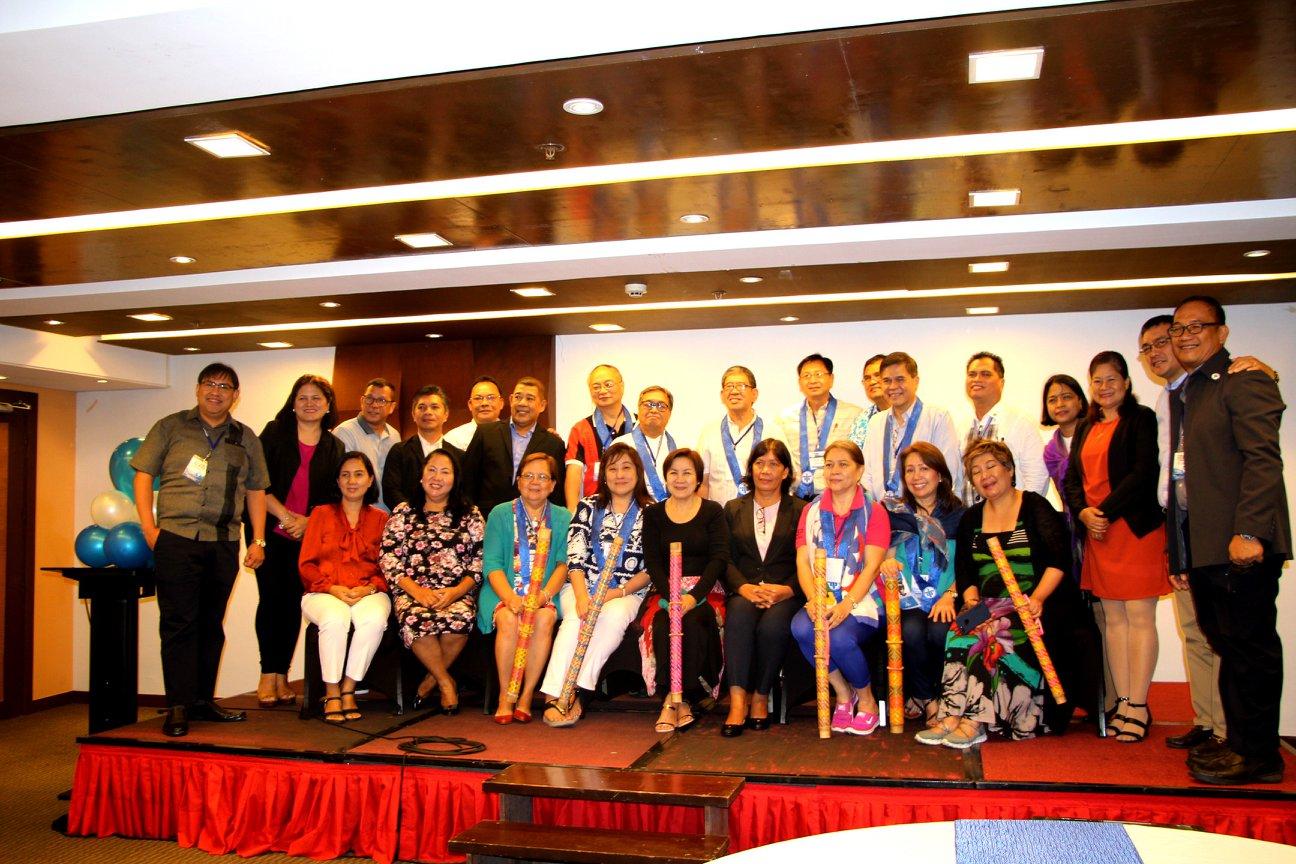 PUERTO PRINCESA — Jubilant members of the two chapters of the Brotherhood of Christian Businessmen and Professionals (BCBP) in Puerto Princesa, Palawan gathered at the Fersal Hotel here last June 9, 2018, to mark the 30th anniversary of the BCBP Breakfast Fellowship in this city.

The festive spirit and camaraderie of the members of Puerto Princesa North and South chapters were bolstered with the presence of brothers and sisters from Metro Manila. They were joined in the celebration by Puerto Princesa Mayor Lucilo R. Bayron and City Councilors Victor Oliveros and Roy Ventura. Ventura is a BCBP Puerto Princesa South Chapter Action Group Leader who also stood as the event’s emcee with his wife, Sis Yeng Ventura. Several first-timers came from the two chapters.

The BCBP Breakfast began here in 1988 through the efforts of the late Bro. Jun Cortes of BCBP Alabang. The seed that was planted eventually grew and bore much fruit. From an outreach of Alabang that was later turned over to Las Piñas chapter, BCBP Puerto Princesa became a full-fledged chapter in 1995 with Bro. Roland “Fuji” Rodriguez and wife Sis. Rosario “Chit” Rodriguez as first chapter head. After the end of Bro Fuji’s term in 1998, Bro. Edwin Tan with Sis. Gina Tan succeeded as chapter head from 1998-2000. 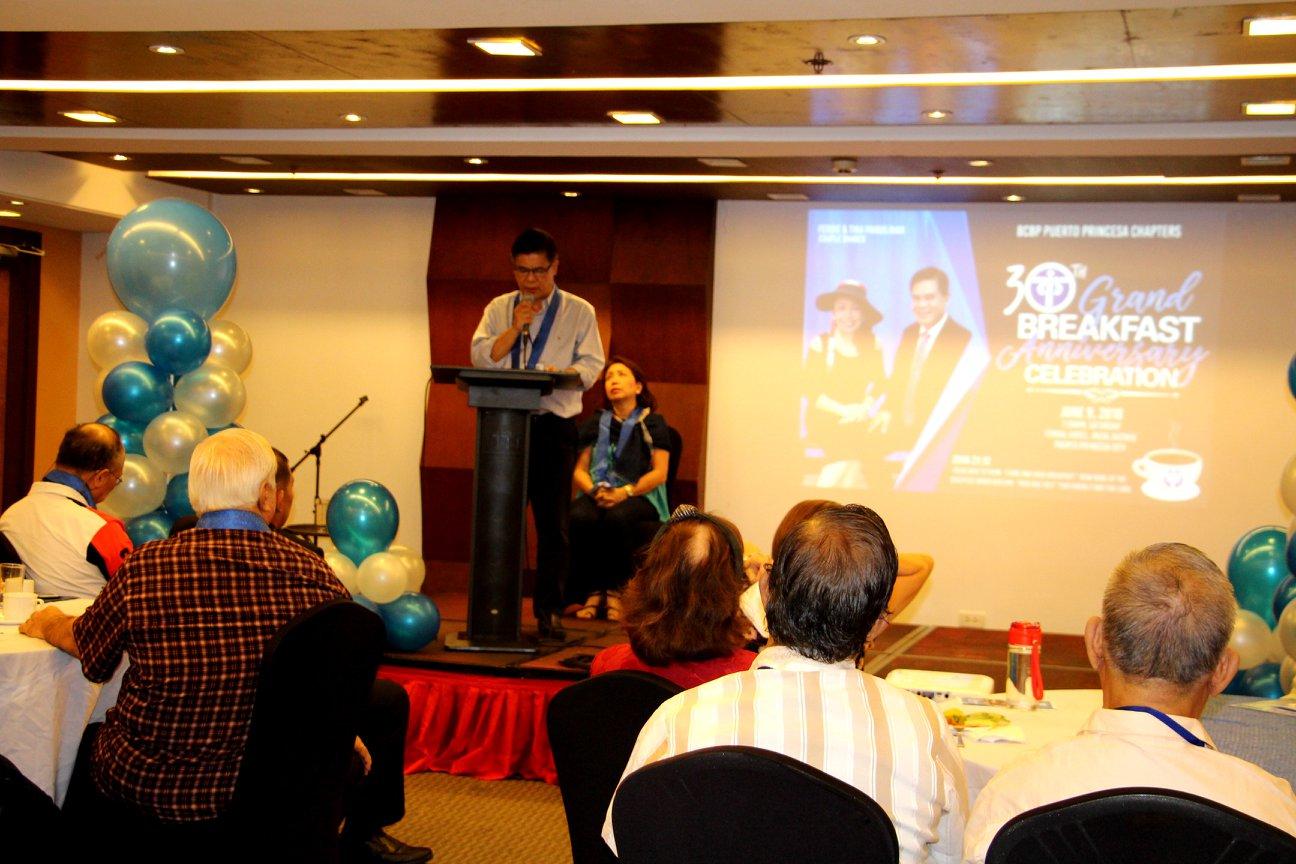 The Breakfast Anniversary was highlighted by the testimony of couple sharer Bro. Ferdie and Sis. Tina Pangilinan, chapter head of the Ortigas chapter. Both medical practitioners, Bro. Ferdie is a surgeon while Sis. Tina is a pediatrician. They joined the BCBP Greenhills Chapter in 1996 and they are blessed with three children who are young adults.

Growing up in two different worlds, it was amazing how God brought together two people He has chosen to be His own. Sis. Tina and her siblings were orphaned at a very young age. They grew up with their strict and conservative grandparents. Bro. Ferdie, on the other hand, spent his childhood and youth in rustic Davao with the dream of scaling Mt. Apo with friends. Nonetheless, it was not a carefree life for him because his parents made sure that their children grew up responsible and disciplined.

It was in a medical school in Manila where Ferdie and Tina met but it was only after they found themselves together in one medical hospital that their friendship grew into a deeper relationship.

Although they have been receiving invitations to the BCBP Breakfast, it took some time before they finally said yes to the Lord. As they became more active in the BCBP and when they sensed that they will be asked to lead a chapter, Bro. Ferdie and Sis. Tina, at first, felt they were not ready for a bigger responsibility and even tried to evade the matter. But God’s ways are not our ways. The Pangilinans were finally installed as chapter heads of the Ortigas Chapter.

The breakfast anniversary culminated with the presentation of certificate of appreciation and a rainmaker to the couple sharer and other guests with the two chapter heads, Bro. Romy Cabungcal for Puerto Princesa South Chapter, and Bro Marlon Sendaydiego of PPC North Chapter, presenting the certificate and token.

Truly, the Lord sends people to inspire, encourage, motivate the workers in His vineyard and with His loving presence assures and strengthens them in their commitment to serve the Lord. The entire BCBP Puerto Princesa community is grateful to the Lord and for the guidance of the Holy Spirit who continues to let the fire fall that the community may continue not only to have breakfast with Jesus Christ but also to bring Christ to the marketplace here in Puerto Princesa City and the rest of Palawan in the next 30 years and beyond. To God be the glory.