Due to the high cost of printing and days of waiting for the output hard copy, the PSD realized the need to adapt in the fast changing technological advances in the country, i.e., the internet.

During the dates of release of the First Hermit iNewsletter, anyone can easily download the latest newsletter online at our Facebook Account (bcbpsanpablo@yahoo.com). Updates are actively made and back issues are also available for download.

This is the newest, fastest and cheapest way of releasing newsletter and disseminating information reaching not only the members of BCBP San Pablo Chapter but also other members of the community worldwide.

• To date, we have been serious to our commitment of propagating Our Be Honest Advocacy.

• PSD has already installed a total of ___ signage in San Pablo City. 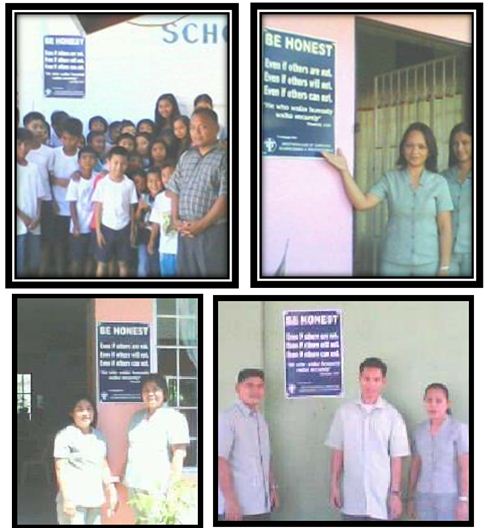 • As an expansion of the advocacy, we are mobilizing to also put up Be Honest Signs at private elementary and high schools in the near future.

• Prior to this, we have already made a mark in the city when we unveiled our Be Honest Billboard in the heart of the plaza.

• PSD has also put up a Be Honest Sign in front of the Saint Paul the First Hermit Parish.

• We are currently negotiating to add more signages to more barangays in the city.

• Several private businesses are also supporting our campaign. A total of ___ Be Honest Signages were already installed in different business establishments.

• As the PSD plans to expand the advocacy even further, PSD has launched the BE HONEST BE SPOTTED campaign in the social media website called Facebook.

• This is a follow up attempt from BCBP San Pablo Chapter to amass the internet of Christ-centered information. Be Honest Be Spotted is a strategy whereby institutions like the academe, businesses and private establishments are featured on our Facebook Account for supporting our Be Honest Campaign by proudly putting up Be Honest Signs in their establishments. It tries to tease the members of the online community particularly Facebook, where millions of users abound every hour, to join our cause in living an honest life. This is a wise strategy that aims to achieve our objectives through practical and far reaching means. We are reaching not only San Pablo City but even beyond borders through the use of the latest technology available to man. Check it out yourself by visiting our Facebook Account by searching BCBP San Pablo Chapter in the search box.

• Its effectiveness has been proven through the number of likes, shares and comments of the online members of the said social media.

• BCBP San Pablo Youth was given life after the first set of our children graduated from the Youth Christian Life Program (YCLP) 2, held at St. Brigitte’s Seminary at Tagaytay City in the year 2006.

• They chiselled a great bonding among themselves and even with other chapters and outreaches. The YCLP ignited their interests and passion to become involved in many BCBP activities and to serve our Good Lord through it.

• With limited resources and countable hands on their side, BCBP Youth have shown their versatility and talent as they successfully organize and assist in many BCBP San Pablo Outreach activities.

• Some of the activities that they are involved with are: (1) organizing the BCBP San Pablo Family Day; (2) their own Bloodletting Project partnered with Philippine National Red Cross; and (3) their exclusive BCBP Youth Empowerment.

• They have handled our Family Day for seven (7) years since 2006. They are tasked in preparing for the overall program, games, prizes, and everything related. 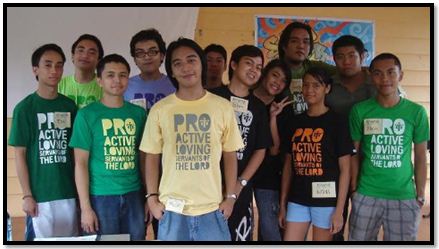 • Since 2008, our chapter has consistently conducted annual blood donation activities every summer in cooperation with the Philippine National Red Cross dubbed as “Dugo Mo. Buhay Ko.”

• Our efforts were given recognition by the Philippine National Red Cross at least three (3) times as of today for our endless support to their cause.

• My son Mico Alban was the PALS Coordinator since 2007. Since then, he devised different activities and programs for our youth. One of which is the BCBP Youth Empowerment Program that he developed.

• BCBP Youth Empowerment Program was started in 2009 since the youth are clamouring for activities. It was the time that (Pro-Active Loving Servants of the Lord) PALS ceased to be conducted yearly.

• As a way to answer the clamour, Mico developed the BCBP Youth Empowerment Program which is a whole day and/or overnight activity facilitated by him and assisted by some members of the community usually the PSD, which tries to slowly inculcate in the youth the importance of Christ in their lives coupled with team building activities.

• BCBP San Pablo Youth truly proved their worth in many of our Chapter activities and even beyond borders. They have many friends from different chapters of Southern Tagalog.

• Needless to say, they are the future of BCBP San Pablo Chapter. They are the next in line!