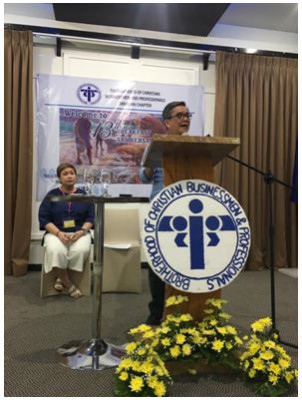 November 25, 2017 marks a momentous event in the history of BCBP Tanauan City Chapter. It celebrated its 13th Anniversary Breakfast with no other than Bro Tito Serafica and his wife Josie as their lifesharers. The breakfast, held at the NDN Grand Hotel in Sto Tomas, Batangas, was well-attended by members of the other Chapters within the Southern Tagalog Region 2.

The breakfast was followed by a program in celebration of the anniversary. What made the event most meaningful was the launching of the first-ever Award for Acts of Honesty. Honesty is a core value of the BCBP community and it is its prime advocacy. And to showcase this virtue in the daily lives of people, BCBP Tanauan City searched for people who have demonstrated acts of honesty and integrity. 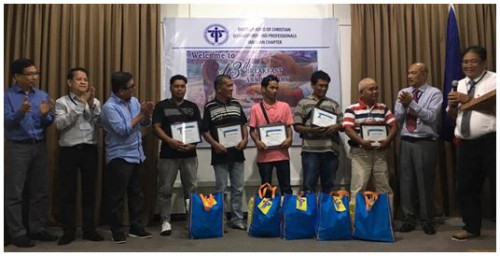 For its initial awarding, the recipients of the award were members of tricycle operators and drivers association (TODA) in Tanauan City. The award, says Chapter Head Vic Mercado, is to recognize people who, despite financial needs and problems, have boldly demonstrated acts of honesty and integrity. Brother Vic was assisted by Bro Tito Serafica, the National Treasurer and Incoming BOT Chair, RCD Pol Hernandez of STR 2 and Bro Noli Castro, the Incoming RCD of STR 2-BatZon.