BCBP Makati and Taguig Golfers give back 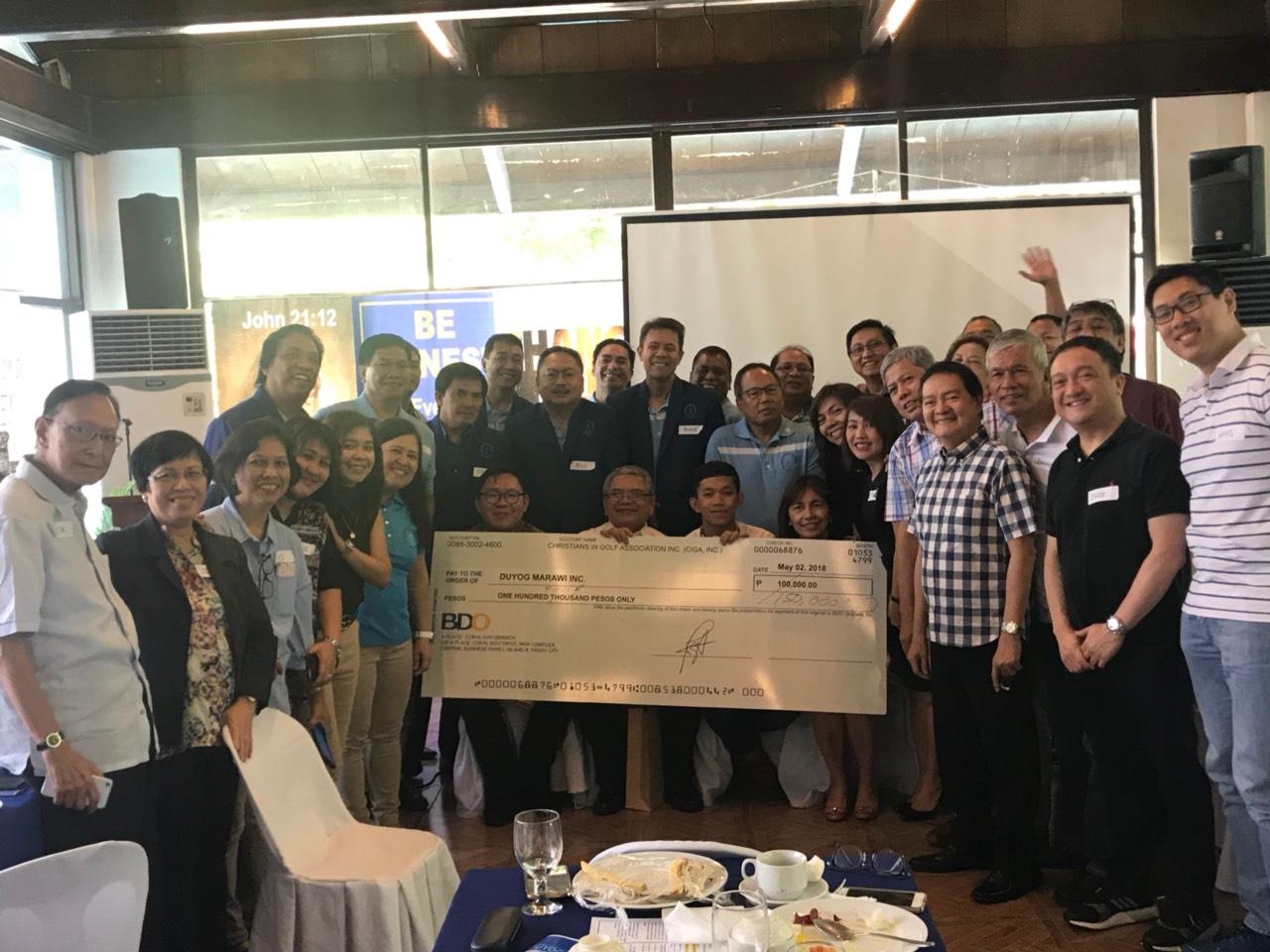 Makati and Taguig golfers (CIGA) reached out to our Christians and Muslim brothers in devastated Marawi. They donated cash thru a symbolic check amount of Php 100,000 (increased to Php 50,000.00 during the May 2, Makati Wednesday breakfast. After hearing a first-hand account of the of the war from an everyday witness, and additional P30,000 was donated on the spot. The cash aid was received by the Bishop Edwin dela Pena, himself, of the Marawi Prelature. The bishop is also spearheading the DuyogMarawi https://www.duyogmarawi.org/ This is a church based Interfaith Organization providing aid and shelter to Christians AND Muslim brothers and sisters displaced by the Marawi conflict. Mass was celebrated before the breakfast at the Makati Sports Club, with Father Gary Alvarado assisting the Bishop. Yes, Bishop Edwin was the very special sharer that morning. To demonstrate the interfaith effort, Makati breakfast had probably its first Muslim first timer, Hakim Onsil from Marawi City.

The Christian in Golf Association (CIGA), a Golf players club composed of Makati and Taguig Chapter members are giving back. It so happened that the current president of CIGA also happens to be the hard working Breakfast Head of Makati Bro Ruel (Liberty) de Castro.Fresh from their support of the National Anniversary (NAC 38) tournament in Beverly Place Pampanga, theyhave quickly organized the donation event within the Makati Breakfast last May 2. Afterwhich, Bishop Edwin had to rush back to Marawi that same afternoon as they are busy preparing for the approaching “anniversary” of the conflict. We, at CIGA were happy to have assisted in our own small way for the devastated city. CIGA, as well, is approaching its own 10 year anniversary commemorating their first formal game in December 28, 2008. It has organized tournaments with for the Benefit of BCBP Makati and Taguig. We have helped fund BCLP’s and family retreats. The golf group was originally established as a golfers weekly informal group which involved into its, still major, goal of using the sport as an evangelization tool for bringing men into the breakfast and into the Christian Life program. I have written about its origins in a column dated way back 2009 http://www.bcbpkapatiran.com/the-reluctant-golfer/.

The passion for their charities matches their steadfastness in serving God thru BCBP. Both the breakfast Heads of Makati and Taguig (Andy/Michelle Tugay) are golfer/ members. Currently from Makati with myself as Mission Director, are Bro Cesar (Rusel) Rubin (Treasurers) and Bro Rico (Libay) Robles are PS Directors. Bro Joey (Lulu) Avellana, ex National president remains to be an active member as well another 25 BCBP and non BCBP members. We continue to fulfill our original goal of using the sport to evangelize golfers to become BCBP members. These include our current breakfast head himself, con currently CIGA president. New recruits with the past few years include Ferdie (Berna) Inacay, William (Chay) Gelia, Edmund (Weng) Thelmo, Amel (Jo) Amar and Benjie Soliman.Taguig Chapter with Bro Dindo Ibazeta, Oca Ragadio and George Elias has achieved recruitment in Bros Marjoe Vista and Mario Nazareno. We continue to have members who are not (yet) Makati Chapter members but these members have not hesitated in helping CIGA as a group, thru golfvarious charities. Previous projects included donating goats as livelihood for the indigenous Filipinos of Baranggay Batyawan in Floridablanca, Pampanga. And as well, we had native boats for the school children of Yolanda hit Estancia town of Iloilo. Someday perhaps, help build an actual bridge so that these kids can get to school without wading thru a river. CIGA is now an entity in itself having registered with the Security and Exchange commission. We are happily anticipating our 10 anniversary come December this year. But before that we are to have a Third CIGA cup tournament mid year to support the next BCLP. The games continue just as the service continues.

What Type of Mother Are You?

A Tribute to Boy Elma