BURDENS GIVE US WINGS 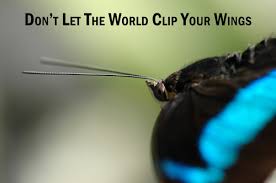 An old legend relates that long ago God had a great many burdens which He wished to have carried from one place to another on earth, so He asked the animals to lend a hand. But all of them began to make excuses for not helping: the elephant was too dignified; the lion, too proud; and so on. Finally the birds came to God and said, “If you will tie the burdens into small bundles, we’ll be glad to carry them for you. We are small but we would like to help.”

So God fastened upon the back of each one a small bundle, and they all set out walking across the plain to their destination. They sang as they went, and did not seem to feel the weight of their burdens at all. Every day the burdens seemed lighter and lighter, until the loads seem to be lifting the birds, instead of the birds carrying the burdens.

When they arrived at their destination, they discovered that when they removed their loads, there were wings in their place, wings which enabled them to fly to the sky and the tree tops.

They had learned how to carry their burdens, and their loads had become wings to carry them nearer to God. Burdens we carry for others may become wings of the spirit, to lift us into happiness such as we have never known.

THE POWERFUL WEAPON OF PRAISE

HAVING A GOOD MARRIAGE IS AN ART