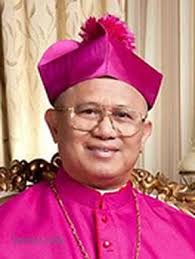 The Catholic Bishops Conference of the Philippines elected Cebu Archbishop Jose Palma as its President during the 103rd Plenary Assembly held at the Pope Pius XII Catholic Center in Manila. According to the CBCP Statues, Palma will take his position as the new CBCP President on December 1, 2011. He will succeed Tandag Bishop Nereo P. Odchimar, who did not seek reelection.

WOMEN WHO ATTEND CHURCH ARE HAPPIER