CLOSING OF THE HOLY DOOR AT THE MANILA CATHEDRAL

Upon the invitation of the Office for the Promotion of the New Evangelization of the Archdiocese of Manila, BCBP President Joey Avellana and Managing Director Serge de la Fuente attended the Closing of the Holy Door of Mercy held at the Manila Cathedral last Sunday, November 13, 2016.

The ceremonies began with a solemn Eucharistic Celebration at 6:00pm officiated by His Eminence, Most Rev. Gaudencio B. Cardinal Rosales, D.D.. Archbishop Emeritus of Manila. It was concelebrated with Archbishop Giuseppe Pinto, the Papal Nuncio to the Philippines, and with a few other Cardinals and Bishops. The mass was very solemn and moving as the choir provided beautiful music. After the Eucharistic Celebration, a message from Cardinal Luis Antonio G. Tagle was read to the congregation.

Cardinal Tagle was not able to attend the event because he was already in Rome for some meetings and for the Official End of the Year of Mercy on November 20, 2016, the Solemnity of Christ the King, when Pope Francis will close the Holy Door at St. Peter’s Basilica. Joey Avellana together with Fr. Herb Schneider, our Spiritual Director, will be able to attend this special event as they will be in Rome to attend the Annual Meeting and International Conference of UNIAPAC. All delegates to the UNIAPAC Conference are invited to the End of the Year of Mercy program. 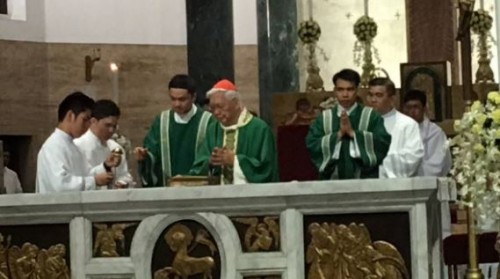 After the reading of the message of Cardinal Tagle at the Manila Cathedral, candles were distributed to each member of the congregation and lighted. A procession led by Cardinal Rosales was then held going out the Holy Door of the Cathedral. All in all, it was a wonderful, touching experience.

ADVENT AND CHRISTMAS SONGS YOU SHOULD KNOW