CONTRACEPTION IS CORRUPTION! CBCP Pastoral Letter on the RH Bill 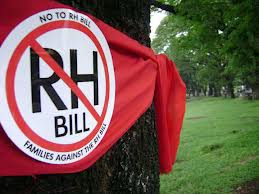 The attached CBCP Pastoral Letter was sent to all the Archdiocesan and Dicoesan Chanceries for the Bishops around the country. It is intended to be read on the 1st Simbang Gabi Mass, Dec 16, 2012. (The signed copy will be published on the CBCP Monitor and other media forums.)

Please continue to pray and go to both the Senate and Congress Halls on Monday, Dec 17, 2012, where the final votation on the RH Bill is scheduled.

But thanks be to God! He gives us the victory through our Lord Jesus Christ (1Cor 15:57)

As we begin the nine-day Misa de Gallo today, our thoughts turn to John the Baptist, the one who points to Jesus, the Christ Child. People came to him to ask, “What then should we do?” because their hearts were filled with expectation for the Messiah. (Lk. 3,15) They needed reason to hope. St. John the Baptist told them to share what they had, to act with justice, and shun extortion.

Today, our question as a people of God, regarding the controversial RH bill, may be the same. What then should we do?

On behalf of the President of the Catholic Bishops’ Conference of the Philippines, I reiterate the collective discernment of the Philippine bishops that the RH Bill if passed into law can harm our nation. Contraception corrupts the soul. The RH Bill is being gift wrapped to look like a gift for maternal health care. It is not so. It will lead to greater crimes against women.

The poor are being promised a better life through the RH Bill. It will not be so. The poor can rise from their misery through more accessible education, better hospitals and lesser government corruption. Money for contraceptives can be better used for education and authentic health care.
The youth are being made to believe that sex before marriage is acceptable provided you know how to avoid pregnancy. Is this moral? Those who corrupt the minds of children will invoke divine wrath on themselves.

The Reproductive Health Bill, if passed into law in its present form, will put the moral fibre of our nation at risk. As we your bishops have said in the past, a contraceptive mentality is the mother of an abortion mentality. The wide and free accessibility of contraceptives, even to the youth, will result in the destruction of family life and in greater violence against women.

We congratulate the one hundred four (104) congressmen and women who voted NO to the RH Bill. You have voted courageously, despite all pressures, to stand up for what is right and true. The Church will remember you as the heroes of our nation, those who have said no to corruption and who care for the true welfare of the people, especially the poor. May you continue to be steadfast and not waiver in your stand against moral corruption. 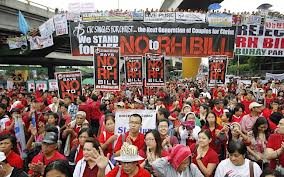 We plead with the sixty four (64) congressmen who have not voted, to be enlightened and stand up for the Truth. As St. John the Baptist directed the people to justice, we call on you also to seek justice for the Filipino people. The Church teaches us to follow our conscience, the inner sanctuary where we are alone with God (Gaudium et Spes #16), but such conscience must be formed and informed according to the universal values that are common to all human persons. The truth is that to be pro-child, pro-mother and pro-poor, we must resist all threats against them. This is justice. Stand up for it; defend it; do not be swayed by worldly pressures, and be the champion of the people who voted for you. God knows and sees what you are doing.

We admonish the Filipino Catholic faithful to share with those who have less this Christmas, but also share in praying that our congressmen and women will be faithful to their call to serve the true interests of the Filipino people. This means upholding life, saying no to contraception which is corruption, and being faithful to the Christ Child who was pro-woman, pro-child and pro-poor.

From the Cathedral of Saint John the Evangelist, Dagupan City, December 15, 2012
For the President of the Catholic Bishops’ Conference of the Philippines currently out of the country,

Thanks to BCBP, from Fr. Herb Schneider