Are you facing insurmountable problems right now? A mountain of debt? A career slump? A painful breakup or, perhaps a marriage going downhill?

Maybe you have just been told of your imminent retrenchment by your employer and you are in between a rock and a hard place – feeling defeated – thinking life isn’t fair? Or perhaps, you’ve been tired of looking for a job, knocking at every door only to get the same reply, “No vacancy”? And you feel like being at the end of your rope?

Friend, your situation is no different from that of the children of Israel when they were trapped between the desert and the Red Sea, hours after they were released from 400 years of slavery in Egypt. They were in a cul de sac situation. Before them were the raging waters, behind them were the angry of soldiers of pharaoh who were fast closing in.

But God works in ways we cannot see. He’s true to his promises even in the most difficult times of our life. He parted the waters and allowed the Israelites to walk on dry ground and escape unharmed while the chasing Egyptian soldiers and their horses drowned when God closed the waters of the sea over and around them.

Like you, the Israelites, while on the course of their journey, became disobedient to God in more instances than one but God kept his promises to bring them to the Promised Land.

There are times in our life when problems seem to be so overwhelming that we seem to be confused what to do. But if we just hold on and continue believing in him, He will fight our battles for us. He will carry us through in every Red Sea that we come to cross in our life.

Remember, many things are born of faith. Trust Him! He will fulfill His promises! That’s His specialty!

1. What Red Seas are you currently (or previously) experiencing in your life? How are you coping with the difficulties?

2. In what ways do you believe the Lord is helping you through your Red Sea? 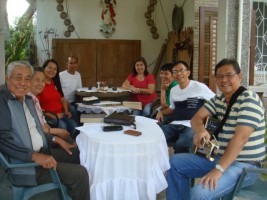 3. What is the promise of the Lord to you? Cite a specific scripture verse if you can. On a scale of 1 (lowest) to 10 (highest) evaluate your level of faith and trust in His promise to you?

4. What are you doing to increase your faith and trust in Him?

This is a picture of Bro Danny’s Action Group.

LENT IS A TURNING POINT IN OUR FAITH JOURNEY

Excellent discussion starter, Bro. Danny. AGM is a great formation course inspiring those who’d become future leaders in the marketplace. Facilitating men to bring out excellent attitude, empowered and enabled in facing their own RED SEAs