The Brotherhood of Christian Businessmen and Professionals traces its beginnings to the Ang Ligaya ng Panginoon Covenant Community as well as to the community movement and Charismatic Renewal from which it sprang.

In July 1980, 24 men met at the Makati Sports Club in what was to be the first Men’s Breakfast of the soon-to-be Brotherhood of Christian Businessmen & Professionals. The initial breakfast flourished with more and more businessmen and professionals attending. This signaled the start of the first Life in the Spirit Seminar, the forerunner of the present Brotherhood Christian Life Program (BCLP). In a span of two years, the first BCBP chapter was established right from where it all started, Makati. By 1984 the fledgling organization split into two chapters with the boundary being the Pasig River. The North Chapter was based in Greenhills, San Juan, the South Chapter remained based in Makati. With this milestone, the BCBP continued to spread its wings the following years with Alabang, south of Metro Manila, being established, followed by Dagupan up in the northwestern Luzon region in 1986.

There was no stopping the expansion of BCBP after that. Several business hubs in Metro Manila cities and municipalities embraced the BCBP movement. Then in the beginning of 1988, BCBP found its way into the business centers of central Philippines, this time conquering Cebu City, Bacolod City and Puerto Princesa City. Cebu Chapter soon ventured into its neighboring provinces and further down south of the country to open new chapters in Mindanao, with Cagayan de Oro City as its initial take-off point. 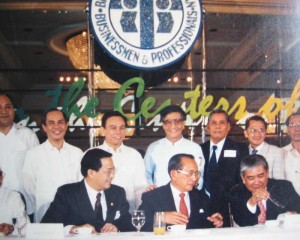 To date (September 2019), the BCBP has 121 full chapters and 43 outreaches including 6 chapters, 6 outreaches, and several missions in BCBP USA, CANADA and SOUTH EAST ASIA.

The Philippine Foundation of The Brotherhood of Christian Businessmen and Professionals (BCBP) is registered with the Securities and Exchange Commission as a non-stock, non-profit organization. It is fully recognized by the Archdiocese of Manila and in all the Dioceses where it operates nationwide.

The BCBP has the singular distinction of having introduced and sustained the BCBP Christian Men’s Breakfast that has changed the lives of so many businessmen and women and professionals throughout its years of existence. There are more than 160 breakfast venues every week throughout the Philippines where businessmen and women meet for food, fellowship, fun, and inspiration through the life sharing of a fellow Christian. The breakfast is the main entry point into the organization.

Members meet in Action Groups, attend Assemblies and other community activities, and participate in the various trainings and formation programs of the community. The BCBP identifies, trains, and develops Christian leaders to become agents for justice and sound development in the work environment. It also conducts workshops, seminars, and retreats as requested by companies, businesses, and government offices, that discuss and present ways by which the Christian businessman or professional can deal with evil in the marketplace.

I would like to ask if there is a chapter in Albay particularly in Sto. Domingo? I am interested to join. Thank you. 🙂

May I know the update about the growth of the BCBP? How many Chapters, Outreaches and Mission Fields does it have now?
Thank you.

I would like to join the KAPATIRAN BCBP i reside in Antique and i see there is a chapter in Iloilo, how can i join? Thanks. 09053098964

Would like to joined the group. Pls advise me accordingly. Thank you. Residing in Guadalupe Cebu but base in Malaysia. Pls contact me at 09182447445.

Hi Bros, I am currently tasked to do the breakfast video for NAC 36. Can you send me please the early photos of the first breakfast in Makati?

I would be pleased to know what is meant by eco-reach and what the organization is doing regarding it. If you can email to me or point to me references which I can study in order to understand, I would really appreciate it.