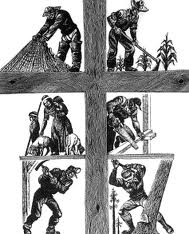 Vatican City, Mar 20, 2014 / 03:25 pm (CNA/EWTN News).– Pope Francis addressed the central role of employment in realizing human dignity during a special audience with steelworkers and residents from Umbria, Italy at the Vatican.

“Labor is an essential reality for society, for families and for individuals. Labor, in fact, directly regards the person, his life, his liberty and his happiness,” Pope Francis said March 20 at Paul VI Hall.

“The primary value of labor is the good of the human person, as it allows the person to be fully realized as such, with his attitudes and intellectual, creative and manual capacities. Therefore, it follows that labor has not only the economic objective of profit, but above all a purpose that regards man and his dignity.”

Pope Francis spoke of labor’s role in actualizing the experience of human dignity: “the dignity of man is connected to labor.”

He relayed talks he had with unemployed young adults, who said that their families are able to eat daily, through the charity of their parishes or the Red Cross. They told him, “but, Father, I don’t know what it means to bring home bread, and I need to eat, but I need to have the dignity of bringing home bread.”

“This is labor,” Pope Francis exclaimed. “And if there is no labor, this dignity is wounded!” 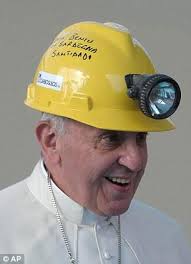 “The unemployed and underemployed, in fact, risk being relegated to the margins of society, becoming victims of social exclusion. Often it happens that persons without work – I think especially of the many young people unemployed today – slip into chronic discouragement, or worse, apathy.

Discussing the unemployment crisis in several European countries, including Italy, Pope Francis said it is “the consequence of an economic system that is no longer able to create work, because it has placed at its center an idol, the idol of money! Therefore, the various political, social, and economic actors are called upon to promote a different approach, based on justice and solidarity.”

“Solidarity is important, but this system is not so fond of it, preferring to exclude it. This human solidarity which assures all the possibility of dignified labor.”

“Labor is a good for all, and must be available to all,” he added.

Pope Francis recommended solidarity and creativity as responses to the crisis of unemployment: creativity of entrepreneurs and artisans, and solidarity “among all components of society, all foregoing something, adopting a more sober lifestyle, to help those in a state of need.”

“This great challenge requires the involvement of the entire Christian community,” the Pontiff said. “For this reason you have come here together: the steelworks, the bishop, the diocesan community … the whole Church is engaged in a pastoral and missionary conversion.”

The first part of this, Pope Francis reflected, is “to revive the roots of faith and of our adherence to Jesus Christ. This is the inspiring principle in the choices of a Christian: his faith.”

“Christian faith is able to enrich society through the concrete element of brotherhood it embodies. A faith accompanied by joy, lived fully and with generosity can give a humanizing force to society. Therefore, we are all called to seek new ways to give testimony with courage to a faith both living and live-giving.”

“Dear brothers and sisters, never cease to hope for a better future,” he encouraged them. “If everyone does what is proper to him, if all of us always put at the center the human person, and his dignity, not money; if we consolidate an attitude of solidarity and fraternal sharing, inspired by the Gospel, we can emerge from the swamp of this difficult and burdensome period of economic turmoil.”

At the end of his address, Pope Francis entrusted his listeners and the whole of their diocese to Mary’s maternal intercession, praying with them the Hail Mary.