It’s June, and a new school-year starts. The leisurely patterns of the past two months will have to be adjusted towards the more organized routines that involve times for waking, eating and sleeping; schedules for leaving home and coming back; and management of school-related expenditures: tuition, books, school supplies, uniforms, tutoring, transport fare and baon.

Most children by the age of five to six are ready to keep some cash of their own. By this time they have started schooling, can count to 10 very well, do simple addition and subtraction and have some grasp of the concept of money.

Very young children can be started off with a few pesos, literally. The very first baon is not so much for buying things, really, but for getting youngsters used to the idea of having and handling cash. It’s like a testing period, to get their financial feet wet. It’s also an opportunity for parents to see a child’s early attitudes towards money. There are those who will hardly be aware that they now have a fixed allowance, those who will immediately ask for more, those who will plan – or make – their purchase right away, and those who will be more excited about the new wallet.

In any case, talking about the new arrangement always helps. Schedules can be set, as well as ground rules and expectations. Setting a specific day of every week as “baon day” lets the child know when to expect the money and helps him budget his funds. Some parents will also want to discuss the spend-save-donate equation. Basic consequences for successful money management can also be agreed on. What happens, after all, if Patrick spends his entire allowance on jawbreakers? Or if little Emily saves all of hers?

The size of the allowance depends on several factors:

*Family income and family values. Dispensing baon, like all money decisions, is covered by general as well as specific considerations. Each couple will have to decide for themselves how to handle their children’s allowances.

*The child’s age. It follows that the younger the child, the smaller the allowance. A graduated scale based on age, among other things, can be planned and agreed upon.

*The child’s needs. What is the baon expected to cover? A child who has to buy his food during the school day will of course need more than one who brings food from home. The same holds true for other expenses like fare, school supplies, class funds, etc.

*The child’s capability. Sooner or later, each parent will find out how capable each child is regarding practical money matters. Until this is established however, there is wisdom in starting small. There is no sense in giving a first grader a 500-peso bill if he can’t count change, or if he’s notorious for misplacing his things. As parent and child move farther along with allowance arrangements, lessons will also be learned, whether from the parent, from peers or from experience.

For whatever reasons, there are some parents who seem to be allergic to the idea of giving their children spending money. Instead, whatever the child needs, they prefer to buy themselves. This seems wise only for very young children, and can in fact be dangerous for older children, in terms of learning independence. As children grow, the need to be money-savvy outweighs considerations of conservatism and over-protectiveness. The ability to spend a fixed allowance at their own discretion (with guidance from parents, of course, as needed and requested) gives children some very valuable practical lessons.

*Children learn responsibility in making decisions. This is the reason why, in the previous paragraph, the mention of parental guidance is qualified with the phrase “as needed and requested.” In the end, it pays to let children learn their own lessons, even if some expense or “wasted” money is involved.

*They learn to budget their funds. If little Joey spends everything in one spree, he will learn the consequences soon enough. In this regard, parents must keep a firm position and resist the temptation to top up prematurely spent funds. The point of having baon is invalidated when Missy can ask for more whenever.

*They learn to manage themselves. Within well thought out parameters, handling their own finances helps children learn various skills that will serve them in many other life areas: negotiating, prudent consumerism, saving, prioritizing, delaying gratification, re-using and recycling, making ends meet, etc.

To conform to their increasing needs and maturity, adjustments are necessary as children grow older. Eventually, other items such as clothing, entertainment, etc., need to be considered and built into their allowances. There are also gender differences to consider. Girls may be expected to spend more on clothing and grooming, while boys will be expected to spend more on entertainment, especially when they reach the courting age.

Childrearing experts agree that a fixed allowance offers many advantages in preparing children for adulthood. This is best balanced with a set of expectations as well, such as those relating to curfews, chores and general behavior. A common recommendation is to establish, via a discussion with each child, a set amount as an allowance, and to offer additional monetary remuneration for extra chores or errands performed, or, in some families, for extraordinary achievements. 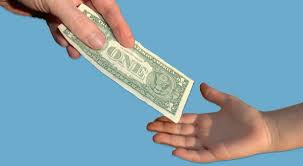 In the end, the size of the allowance is a personal matter. All these considerations are particular to each family and further, to each child. Therefore, dialogue between parent and child is vital, as well as the parents’ ability to see each child as a unique individual.

Have a great, blessing-laden schoolyear!

CHARITY AND CONSCIENCE ON THE RH DEBATE