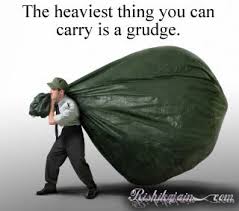 A young French schoolboy watched as two Englishmen disembarked from their ship at the port of Calais. Before they knew what hit them, the lad charged at them, push­ing them off the pier into the water. Not too pleased at this inhospitable gesture, the men climbed out and ac­costed the boy. “Just what are you trying to do? Is that any way to greet visitors to your country? A good spank­ing might teach you some manners. Why did you do such a thing?” The boy spat back, “That’s for burning Joan of Arc at the stake!” “But that happened five hun­dred years ago,” was the astonished response. “Yeah, but I just learned about it this morning,” he replied.

Nationality jokes are banned at my house. As instruction in a certain dan­gerous human weakness, however, such humor does have redeeming value. Like the boy in the anecdote, people tend to hold grudges against one another for a long time. Individuals may nurse bitter memories of past rivalries for years. Nations may do it for centuries. In any case, resentment is an unhealthy practice and detri­mental to all involved.

Nursing grudges is a serious stumbling block in the Christian life. Constantly recalling people’s offenses and thinking of ways to pay them back creates a steady drain on our spiritual energy. Bitterness prevents us from receiving the Lord’s power. It blocks our release from the problems that afflict us. 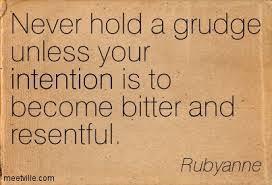 Only rarely do we succeed in damaging an offender more than we damage ourselves. The harder we try to get back at someone, the more we get hurt. As our mind reaches out in search of revenge, bitterness reaches into us, plunging its massive, expanding tentacle deep within us. Daydreams of getting even devour our time during the day. At night we lose sleep to our hurt feel­ings. Resentment is a spiritual tapeworm that nourishes itself at our expense. Too often we are willing to feed this parasite.

Revenge can seem so reasonable. It doesn’t take much to persuade us that we have good cause to strike back. Four-year-old Mary runs in tears to her father with the complaint, “Daddy, Daddy, Tommy hit me for no reason.” Five-year-old Tommy is next on the scene, ex­plaining to his dad that the reason he hit Mary was that she hit him first. Like the children in this all-too-familiar scene, we often have good reasons for striking back at people who have mistreated us. Many times we are perfectly right. In accordance with principles of strict justice, people who wrong us ought to repent and make amends for the damage they have done.
God calls us to show mercy to others

Although this approach makes sense on one level, it can be fatal to us on another. If it’s reasonable to hold others to a standard of strict justice, it’s equally reason­able to hold ourselves to the same standard. Had the Lord demanded payment for the debt we piled up be­cause of our sins, it would have cost each of us our lives. Death would have been only fair punishment for us. What else could we expect?

The Lord has a different standard

The Lord, however, dealt with us according to a dif­ferent standard, a standard of mercy. He was not put off by our sin. In the face of an endless inventory of wrong­doing and direct offenses against His Person, He sent His Son to an ignominious death to cancel our debt to Him.

“While we were still weak, at the right time Christ died for the ungodly. Why, one will hardly die for a righteous man — though perhaps for a good man one will dare even to die. But God shows His love for us in that while we were yet sinners Christ died for us.” Instead of ex­acting what we owed Him, the Lord forgave us. Paul says that the Lord “canceled the bond which stood against us with its legal demands; this He set aside, nail­ing it to the Cross.” 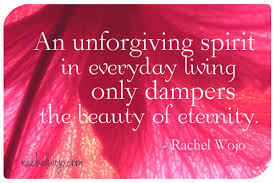 If we want the Lord to release us from our wrong­doing, we must release others from the wrongs they have done to us. This is what we pray in the Lord’s Prayer. Instructed by Jesus Himself, we ask the Father to bestow the same measure of forgiveness on us as we be­stow on others. If we have been stingy with our forgive­ness until now, we had best hasten to become more generous. We ought to understand the consequences of praying the Lord’s Prayer. We don’t want to commit ourselves to a limited measure of forgiveness and mercy each time we say, “And forgive us our trespasses as we forgive those who trespass against us.”

If we are harboring resentment, grudges, or bitter­ness against others, the New Testament commands us to put them away. “Let all bitterness and wrath and anger and clamor and slander be put away from you, with all malice, and be kind to one another, tenderhearted, for­giving one another, as God in Christ forgave you.”

When we hold a grudge, we are holding a claim against someone. We write out spiritual IOUs. We keep strict accounts, planning to exact the very last penny. In our ledger, we hold IOUs against our parents (for quarreling between themselves and manipulating us); against brothers and sisters (for belittling us and get­ting more parental attention, or so it seemed); against spouses (for some petty fault or slip of the tongue); against children (for lack of respect and for turning out different than we had planned). We hold IOUs against friends, neighbors, coworkers, acquaintances, and so on. If we are to experience freedom ourselves, we must cancel all these debts. We must deal with our IOUs the way God dealt with ours: He “canceled the bond which stood against us with its legal demands; this He set aside, nailing it to the Cross.”

Tearing up spiritual IOUs helps rid us of resentment

There is a practical way to get rid of resentment. Make a list of all those people toward whom you have resentments. Begin with the people closest to you — parents, spouses, brothers, sisters, and children — and move outward from there. You might want to list each on a separate slip of paper. Then tear up the IOUs one by one. Forgive each of them, no matter what they have done to offend you. 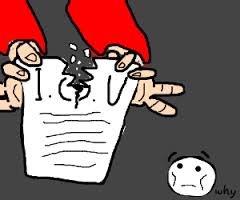 You may come up against one or two IOUs that you feel you just can’t tear up, because the hurt was too big.

A common mistake is to think that forgiveness is something a person feels rather than something a person does. If we wait until we feel like forgiving, we’ll proba­bly take others’ IOUs with us to the grave. It helps to feel like forgiving someone we must forgive, but if we don’t feel like it, we should go ahead and forgive any­way. Once we have torn up the IOUs, once we have stopped dwelling on the offense against us, our feelings toward the person will improve. Through the power of forgiveness, many a person has ended up liking some­one they thought they would always hate.

Tearing up IOUs is usually a unilateral action. For our part, we release people who have offended us. We say by our action that we no longer intend to collect what­ever we think they owe us. Tearing up IOUs doesn’t mean saying to each person toward whom we feel resent­ful, “I forgive you for the time you did this” or, “I don’t hold that against you anymore.” Usually putting aside resentments and bitterness is something I do privately, between the Lord and me. But doing so can suggest ways of straightening out broken relationships. We should be open to taking further steps if they seem right. Talking over with someone we trust what we think we must do may help us act prudently in mending relationships.

The Lord gives us the grace to forgive and forgive generously. We should begin now by tearing up the IOUs we are holding, and we should repeat the process regularly.

We can now add a part to our strategy for get­ting free from the influence of the flesh:

We must put aside all resentment, bitterness, and grudges. These are obstacles to our spiritual freedom that prevent us from experiencing the power of the Lord in our lives.

This article is adapted from a chapter in Dr. Ghezzi’s Getting Free: How to Overcome Persistent Spiritual Problems, which is available from Sophia Institute Press. Bert Ghezzi is the author of thirteen well-loved books, including Voices of the Saints and Keeping Your Kids Catholic. He has written articles for numerous magazines, including New Covenant, Our Sunday Visitor, and Catholic Digest. He has been involved in religious education for over 40 years. After receiving his Ph.D. from the University of Notre Dame, Bert was a professor for seven years at Grand Valley State University. He and Mary Lou, his wife of 47 years, have seven children and 15 grandchildren.

Q & A: WHAT IS THE LITURGY OF THE HOURS?

LIVING EACH DAY AS CHRISTMAS