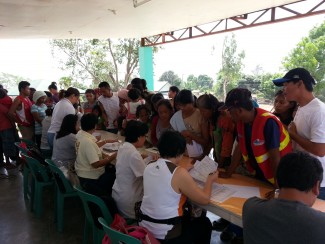 Sunday, March 16, 2014, was the day when around 100 members of the very cosmopolitan Chapter of BCBP Makati left their comfort zones of air-conditioned offices and business life. A medical mission awaited them in a barangay so remote, it is not even on Google maps. A two hour trip from Makati took us to the SCTEX exit at Floridablanca, Pampanga. It was only here that most of us members began to realize just how far this place was. We had to traverse some mountain dirt (actually dust) roads for more than an hour to reach a part of the Zambales mountain range at Subic in a remote hamlet called Batiawan. Population :1000 of mostly native Filipino (Aeta) folks. This is on the same mountain range as Mt. Pinatubo. This is the hometown of Brother Cesar (Rusel) Rubin.

We reached a plateau where the Batiawan Elementary School was located. This was not going to an ordinary and certainly not an easy medical mission as the estimated number swelled to more than 400 before the mission even started. It was mostly an Aeta community who were invited to have their free medical and dental check-ups at the school. Some were so used to going barefoot that if you give them a new set of flip-flops, they would reserve them for their Sunday stroll. Our heart melted at the site of hardy senior folks, many of whom see a doctor perhaps on a yearly basis. There was one young girl, 28 years old, who had had 5 kids. Even then, the doctors doubted her age as she looked much younger than 28. The innocent smiles of the young Aeta children belied the fact that they are living a hard life in this mountain village. 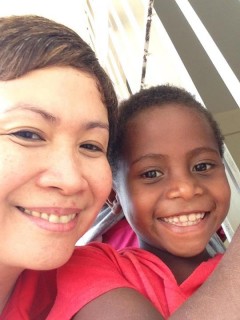 Dental Team Leader was Makati’s Rico Castro supported by Cecille Ignacio, Mariz Padua and Kathy Galinato. A Team of 12 young volunteer Nurses went straight to the exam rooms to assist the medics. We were more than blessed with a bounty of donated medical/surgical supplies donated by RiteMed, Pharex, and Unilab plus some daily necessities donated by Unilever. Some doctors bought their own sphygmomanometers and weighing scales.

Makati’s young new member Bro Lito Ladlad was this mission’s head coordinator; he worked closely with Makati’s PSD couple Opie and Maris Nioko. At the end of the day the Makati team had a chance to rest and have some early dinner courtesy of Batiwan’s native son, Bro Cesar (Rusel) Rubin. He has established a residence there, likewise on a remote area that cars cannot reach. We had to walk to get there. 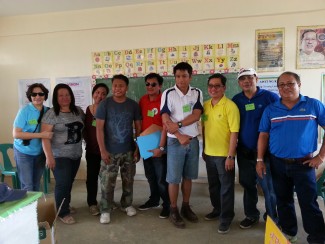 One might wonder what a veterinarian like myself was doing in a human medical mission. Well, let it be said that I was prevailed upon by brothers and sisters in the chapter as well as, I guess, by the Holy Spirit. I had of course opted to leave my meter long equine thermometers and 14 gauge syringes at home.

We left a lot of happy, smiling faces in Batiawan, Zambales that Sunday. But it was quite obvious as well that the doctors and we all left the place taking home some happiness ourselves knowing that even for a day we were able make these folks smile. On our part “we truly saw Jesus in the faces of our Aeta brothers and sisters.”

Thank you Jesus for giving us a chance to experience True Happiness, Peace and Joy , by serving God and Neighbors…Always remembering that the Phils. has 23 million hungry and malnourished Filipinos, dying at the rate of 1 every 3.6 secs..(WHO)……MM2P Ntrition Program ….on Facebook

Happy to be part of this mission. To GOD be the glory.