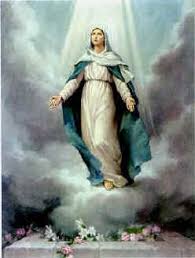 The month of August with its two Marian celebrations, the Assumption of Mary (Aug 15) and the Queenship of Mary (Aug 22), is a time for us to reflect on Mary’s role in our lives today.

It is sad to see that Mary, the mother of Jesus, who was so loving, supporting and solicitous of Jesus as a child and during His ministry, should now have become a “bone of contention” among Christians. It seems that, instead of leading more people to her Son, the mention of Mary is sometimes a cause for division among us, her Son’s followers.

During my adult catechism many years ago before I was married (I grew up as a Methodist and was baptized a Catholic before I was married), I remember having some problems with some Catholic beliefs about Mary. But Fr. Murphy, my catechist, advised me to simply accept Mary as the mother of Jesus and to remain open-minded about the various Catholic beliefs and practices. He said that Jesus was the important One to anchor my faith on, but he added that he was sure that over the years, Jesus would help me get to know His mother better and to love her, too.

I learned about the “hierarchy” of Christian truths, foremost of which is that truths about God – the Father, the Son, and the Holy Spirit – are the central truths of the Gospel message and take precedence and importance over all other beliefs. Some of these central truths are the Fatherhood of God, the death and resurrection of Jesus, the power and gifts of the Holy Spirit, the forgiveness of sins and the promise of eternal life. These we repeat daily in the Nicene Creed, the “I believe”.

Official Catholic teaching has never considered beliefs about Mary as being in any way equal to the truths about God. But, on the other hand, the Church believes that God has given Mary a very special role and place in the heart and life of every Christian.

Mary is never to be “worshipped” or “adored” as a goddess but her role in our salvation history, both past and future, must not be neglected. Vatican II terms these extremes “…the falsity of exaggeration … and the excess of narrow-mindedness” (Dogmatic Constitution of the Church, no. 67).

Ark of the New Covenant

We first meet Mary in the bible as a young woman set apart by God, visited by the angel Gabriel who announced to Mary that she was to be the mother of the Son of God, our Savior. Her role had, in fact, been foreshadowed in the Old Testament book of Genesis (Gen. 3:15). The prophet Isaiah referred to this momentous event and even prophesied his name to Emmanuel (Is. 7:14). Matthew recounts the nativity as fulfillment of this prophecy (Matt. 1:22-23).

As Noah built and “captained” the ark of the Old Testament, keeping the remnants of God’s creation alive and saved from the destruction of the Great Flood (the wrath of God), so, too, did Mary keep mankind “alive” by bearing Jesus in her womb. Her initial God-given role was to be the ark of the New Covenant, to bring Jesus into the lives of mankind in a new and special way. Because Mary (like Noah) responded to God’s call in complete obedience and trusting faith, man could now see Jesus, touch Him, talk with Him, listen to Him, experience His power and holiness. Being human, we can better relate with Jesus, the Son, Whom we can see, than with God in heaven Whom we cannot see.

Mary’s initial role was then expanded to include caring for Jesus in all the ways that a mother cares. She nourished Him materially, seeing that He had enough to eat, that He washed his face and hands before eating, doing all the things that we mothers do for our children. Mary also nourished Him spiritually by encouraging His faith in God, by teaching Him the values and virtues of goodness and godliness and observance of their religious practices. Is this in the bible? Luke 2:52 tells us that Jesus grew in wisdom and favor before God and man. And my mother’s heart tells me that Mary, as His mother, was instrumental in this growth. 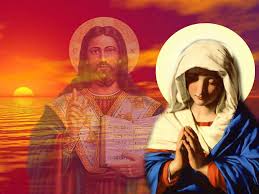 When Jesus began His ministry, Mary’s role was given a new dimension. At Cana as her Son was attending a wedding, she interceded for the celebrants in the matter of wine. And because of her quiet, simple faith in Him, Jesus heart and answered with His first miracle.

We know that Jesus remains the one mediator between God and man (1 Tim. 1:15-16). He is the source of all God’s grace and salvation. But we also learn in 1 Peter 2:9 that He calls the faithful to share in his priesthood, a fact which author Alan Schreck (Catholic and Christian) says allows and enables us to pray to God for each other. We share in this work. Mary shares in this work. As she intercedes for us, she encourages us to look to Him, listen to Him, and obey Him. Even as she did at Cana, Mary directs our attention to her Son today as she appears to the faithful all over the world.

Mary as Our Mother

Elizabeth, filled with the Holy Spirit, proclaimed to Mary in greeting, “Most blessed are you among women, and blessed is the fruit of your womb. And how does this happen to me, that the mother of my Lord should come to me?” (Luke 1:42-43) The Holy Spirit inspired her to recognize that Mary was to be the mother of God. And with this inspired proclamation, Mary’s motherhood is presented to us in all its greatness.

But God was not just satisfied to put Mary apart from us as the mother of God. As Jesus, her Son, hung in agony on the cross, He gave Mary, His mother, as a mother to all the faithful, symbolized by John, “the disciple whom he loved.” (John 19:26-27) With this beautiful act of love, Mary became our mother … if not physically, than our mother in faith, our spiritual mother.

We understand that nothing Mary does or can do in herself can give us salvation. But we recognize that because of her special relationship to Jesus and her “motherhood” to the faithful, we should respect and honor her. We also appreciate that part of Mary’s greatness lies in her insistence that we understand and draw nearer in love and obedience to her Son Jesus. How hurt Jesus must be as He hears and sees people ignoring His mother, downgrading His mother from her God-given roles, even insulting His mother! How would we feel if someone did the same to our human mother, who loved and raised us, cared for us and comforted us?

Mary’s Influence in My Life

Some years ago as I was reflecting on the role of Mary in my life which had gradually grown over the years as Fr. Murphy had foretold, I wrote down (as is my practice) a summary of my thoughts. These I would like to share with you as I feel that in a simple way, they put Mary’s role in our lives into clearer perspective.

Secondly, I should imitate Mary in her prayer life. As I tried to picture Mary during the early years of Jesus’ childhood, during His ministry, death, and the stirrings of the early church, Mary is always in my mind’s eye at prayer. She is praying while working, praying whenever she can during the day, remaining in a prayerful attitude even in her sleep. And her prayers are mostly for others. How about my prayer life?

Thirdly, Mary was always present when she was needed. She accompanied Jesus during his ministry, she was at the foot of His cross, she waited with the disciples in the Upper Room. Am I present when I am needed by my husband, by my children, by my friends?

And, lastly, Mary was a woman of great love, a love that reflected itself in her person, her simplicity, her holiness, her concern for others. Her overwhelming love for Jesus kept her near Him despite the great trials and sufferings she experienced. Her love was a love from the fullness of her heart, a caring love, a gently love, a strong and victorious love. Will I ever be able to allow my heart to overflow with such a love as that of Mary?

This month as we celebrate Mary’s Assumption and Queenship, I urge you to reflect in a deeper way on the influence that Mary presently has in your life, and on the role God would want His mother to have in your life. –Nancy R. Catan, BCBP Manila

OUR HEART LONGS FOR GOD

I congraulate Nancy for publishing this inspiring and heart touching thoughts on Mother Mary. Thank you very much. May God inspire you more and more to produce this kind of articles. Keep it up.