Dear golfers and other brothers and sisters,

This column is meant to be humorous bordering on parody. I attempt to describe some of the kinds of golfers today… haha!! So to all you happy new brothers in the Lord’s Fairways, enjoy a good laugh (at least smile a little) and I look forward to seeing you on the greens. — Danny

Let’s start the year (late!) with an oft quoted verse about New Year’s resolutions – much interpreted and misinterpreted. Example of gross misinterpretation: Do not put new golf clubs into new golf bags.

This version may sound like a parody but it is actually true: “Don’t hit a new driver with an old swing”. A new, shiny, superfast driver, a new pair of shoes and a new golf balls will not make r a golfer “new” if he continues with old swings and old habits. So once again, let’s consider joining the New Year’s resolution band wagon hoping that at least one of these resolutions will not be broken.

Genesis 2:18 – “It is not good for the man to be alone” . . . especially if the man is a golfer. So here goes with some re-issues of new thoughts about golf amongst men.

First of all, lest we all be accused of DELIBERATELY distracting our flight members in order to win a bet, let’s all be gentleman and consciously observe the following thoughts in order to avoid UNWITTINGLY distracting your competitor . . . Unless of course; distracting other players has been the secret of your golfing success.

1. Show RESPECT to the other golfers in your flight by :
– Keeping SILENT, you know – quiet?! – especially when a brother is about to tee off; your last minute advice about the way he addresses the ball is a poorly disguised attempt to deliberately ruin his concentration.
– KEEPING SILENT also refers to keeping your cellphone on silent mode and if you MUST take the call, MOVE AWAY. If you found time to squeeze an 18-hole game in your day, then that deal approval can wait. The gold standard for all cellphone interruptions is Bro Jimmy Zamora’s favorite retort of “You are disturbing me” – well, that depends on who is calling you, of course!

2. Resist all temptation to deliberately delay the game because you don’t care how the pace of the game goes as long as you take your sweet time taking your shot.

3. Resist all temptation to distract a guy who is making his shot especially if you know that you play better than he does, and he was forced to bet with you and the others in this game.

5. Make sure your gloves are on before you tee off and you are ungloved before you putt. Furthermore, if you are a closet narcissist and must check the way you look before you take your shot, do it way before your turn. Bring a mirror if you wish, but do check how good you look long before you take that shot – that might up out of bounds anyway.

6. Practicing regularly shows your commitment to the sport and, indeed, respect for other golfers. Set goals for gradual reachable improvements no matter how small. Because if you don’t, you will always end up losing.

7. Filipinos including golfers are generally non-confrontational (as what my British friends keep telling me) So just because they never make a noise about how you are deliberately cheating on your scorecards doesn’t mean you have blanket permission to do this in every game because you think you can get away with it. Remember, brothers, “Be Honest even if others are not…”

I was surprised at how many people identify one or two particular guys as no 1 and 2 in their list of people to avoid having in your flight. Talk about ‘if the shoe fits, put it on…’!! 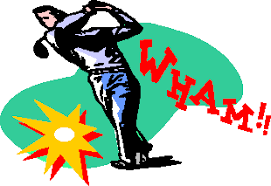 Since there is no exact English translation for the Tagalog word “gigil” (Try googling it) let me write down these thoughts : The golf ball is not your enemy so stop trying to kill it with an intensity 7 swing. As Bro Johnny Calixto would say – do not make an angry swing.

Practice more often so you don’t end up paying. Betting in golf is a reality. Better players can force worse players to bet and play and take their money – this is apparently also a reality.

However, if you are there to buy new apparel so that you keep looking good – whether you win or lose – take me with you.

Happy New Year and as the graphics in my last column would say, “May your ball land in green pastures and not on still waters.

WHAT ARE YOUR GOALS IN LIFE? HAVE YOU UPDATED YOUR PGP?