We share with you snippets culled from Zenit.org releases, which give us initial insights on our new pope, Pope Francis. A Vatican spokesman clarified that his papal name is simply Francis, not Francis I, since he is the first pontiff to bear that name. If after him another pontiff chooses that name then he will be Francis I. 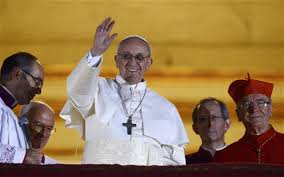 Jesuit Father Federico Lombardi, director of the Vatican press office, noted a few significant gestures during Pope Francis’ first public appearance that characterized the simplicity and serenity of that encounter, beginning with the Pope’s request that the faithful pray for him and his choice of vestments. “The new Pope wore neither the red ‘mozzetta’ (the elbow-length cape worn by high-ranking prelates) nor a stole, and his pectoral cross was the same simple one that he has worn as bishop and Cardinal archbishop of Buenos Aires, Argentina. The choice of his name Francis, after St. Francis of Assisi, strongly recalls the saint’s evangelical spirituality and radical poverty,” Father Lombardi said. Another gesture made by the new Pope, Fr. Lombardi continued, was that Wednesday after his election in the Sistine Chapel, when his cardinal brothers paid him homage, instead of sitting on the papal throne, he stood as he received them. As well, instead of taking the papal car that had been prepared for him to return to the Domus Sanctae Marthae, he took the same minibus he had arrived in along with the other cardinals.

Cardinal Timothy Dolan of New York in his interview with reporters commented on the pope’s taking the bus back to the cardinals’ residence. “They were expecting him to arrive in a limousine, which they saw parked in the Apostolic Palace. And when the last bus stopped, guess who came out? Pope Francis. I imagine he said to the chauffeur: ‘no problem, I’ll go with the boys,'” explained Cardinal Dolan to journalists, revealing the pope’s sense of humor.

Dr. Edward Mulholland (Gregorian Institute at Benedictine College) believes that three keys to the pontificate of Pope Francis will be humility, reform and evangelization.

Humility: His first act as pope, before blessing his people, was to pray for his predecessor and then to bow down before his flock and ask for their prayers. Even as Cardinal Archbishop of Buenos Aires, Juan Mario Bergoglio lived in a small dwelling, not a palace, cooked for himself, and often took public transportation. He is a Latin American Jesuit with a huge heart for Social Justice, and yet distanced himself early on from currents of “Liberation Theology,” which would have us practice the Gospel seen through a Marxist prism. Such a stance may have made him unpopular in his seminary days. It takes humility to buck trends and stick to the truth. It takes humility to recognize your own weakness and ask for prayers. It takes humility to live humbly as a prince of the Church.

Reform: Pope Francis has worked with the Curia, but he is an outsider, not an insider. He said the cardinals went to the “end of the earth” to find him. And he picks a name not ever used before. This marks something new. Francis of Assisi was asked by God to rebuild his Church. He at first thought it was the run-down church of San Damiano. He soon learned it was the whole Church, through a humble living of the Gospel. Pope Francis I will be a man of reform. He has an Italian last name but a new fresh perspective. It will not be business as usual in Rome for long.

Evangelization: For a Jesuit, the first Francis that comes to mind would not be the Poverello of Assisi, but St. Francis Xavier, one of St. Ignatius’ first “Company of Jesus,” whose native language, Spanish, Jorge Bergoglio shares. Converted as a young man in college, St. Francis Xavier went to the ends of the earth to preach the Gospel, including Japan, before dying on his way to China. At the upcoming World Youth Day in Rio de Janeiro, you will hear the new Pope tell the youth of the world that story and challenge them to be like Francis Xavier. Bet on it. This will be a pontificate that is marked by a reinvigorated New Evangelization.

In a review of Cardinal Bergoglio’s homilies, Dr. Mulholland cites charity and clarity. He comments, “One constant in his homilies: questions, and not of the idle rhetorical sort. He wants his listeners to answer for themselves, to interrogate themselves, to measure themselves against the standard of the Gospel that he is explaining. These questions lead to action, and with charity and clarity he leads his listeners to make resolutions based on the Gospel texts. Actions, not just ideas. On Christmas Eve in 2011 his faithful heard, “Open your heart, look inside and ask yourself: how am I marginalized, how do I marginalize myself away from love, from concord, from mutual collaboration, from solidarity, from feeling like a social being?”

He continues, “And since his name is Jorge Mario, he is Marian through and through. He ended his homily during last year’s Easter Vigil this way: “That night she, too, the Mother, was in vigil. Her insides made her intuit the closeness of that life which she conceived in Nazareth and her faith strengthened that intuition. We ask her, the first disciple, to teach us to persevere in the vigil, to accompany us in patience, to strengthen us in hope. We ask her to lead us to an encounter with her Risen Son; we ask her to free us from fear, so that we too can hear the angel’s message and run off… not out of fright but to announce it to others in this Buenos Aires that needs it so much!”

And this is what we, all of us in the Church whether religious or lay, need — charity, patience, simplicity, humility, a passion for evangelization, his call for reform beginning with ourselves, and willingness to be open and obedient to God’s Word.

Above comments were taken from various releases of Zenit.org [ZE130314].

“LET US NEVER TIRE OF ASKING FOR FORGIVENESS”