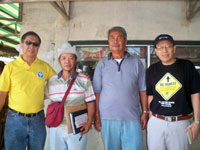 According to Rizal Alido, president of the Ungka Terminal Aquino Avenue Jeepneys Operators and Drivers Association (UTAJODA), “This campaign is fully supported by the drivers because it reminds the drivers and passengers to be honest and responsible in partaking of the services of the PUJ.” He added, “Being honest could be a way of life for the public, so we could live harmoniously.”

Read the complete news release as it appeared in the Iloilo newspaper:
http://www.thenewstoday.info/2010/03/03/bcbp.launches.honesty.campaign.on.pujs.html

IS FASTING A LOST CULTURE?