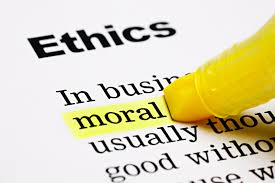 Business regularly confronts situational dilemmas in the marketplace that put real strain on the application of one’s Christian beliefs and moral lifestyle. We see corporations with Mission and Vision Statements, Codes of Conduct, and Statements of Business Principles and Policies. Yet many times these human-based ethical systems are drawn up to spell out the top management’s human desires and goals without considering what, if any, are the underlying moral values that should provide the Code’s foundation. This “rules-only” approach often presents problems in discipline.

The foundation of a moral workstyle is not so much following the rules of ethical behavior as it is imitating the Way of Jesus Christ. Every Code of Business Morals and Ethics must, therefore, begin with an identification of the moral character of the business aligned with Jesus’ value system. Ethics, the study of human character, follows. This approach sets priorities in right order – God first; human happiness and fulfillment of business obligations to shareholders, employees and customers follow.

Basic Concepts:
• Make it unique: The code must fit your company’s needs and aspirations.
• Keep it open: Development of the code should involve everyone in the company.
• Make it consistent: Double standards undermine management’s credibility and cause confusion.
• Allow it to evolve: No code works forever. Regular review is essential.
• Make it simple: People have to understand the code if they are to adhere to it.
• Give it teeth: No code of conduct works unless it can be effectively enforced.

Content:
• Back the law: An essential part of the code is that no one should break the law.
• Adhere to standards: Make sure that, at the very least, the code adheres to established standards for your industry and for the specific trades and professions you employ.
• Go a step further: To make your company truly ethical, it is not enough to have a code that simply demands adherence to laws and standards. It must include honesty, equity, integrity, and social responsibility.
• Put it to the test: It is impossible to cover every eventuality in a code of ethics. But one good test of whether an action is ethical is whether the company’s reputation would survive disclosure and critical public scrutiny of its actions. If it would not, it’s more likely unethical.

A Code of Ethics or Moral Standards is only as good as the degree of commitment of each person in the organization to the code. It is a good practice when evolving the code to involve all levels of the organization to the fullest extent possible so that everyone will feel that they are a part of the code. If they are able to identify with the code, they will more likely be committed to its ideals, goals, and standards. If commitment is not present, the code will not be willingly nor wholeheartedly followed.

In today’s marketplace there exist business practices that are of moral concern. These concerns may either be included in the company’s Code of Ethics or Moral Standards, or may be set out in a second document that would discuss each concern in terms of its implementation in the practice of that business. Some of the areas of moral concern that may be addressed in the company’s Code are:

Implementation of the company’s Code of Ethics or Moral Standards and its Implementing Policies and Practices is where moral courage comes into play. Moral courage is the capacity to have the moral will-power to withstand the temptation to succumb to wrongdoing, and to uphold one’s well-formed and informed value system with a clear conscience. Such courage requires confidence in oneself to do the right thing, patience in pursuing the path of justice in love, and the perseverance and vision to follow one’s chosen path. Within the corporate structure such moral will-power should encompass all levels of the business organization from the janitors up to and including the top executives.

There is a growing desire to bring Christ and Christian values into the marketplace, into the business workplaces, and the professional milieu. Economic growth on its own can never achieve social progress, but, on the other hand, there has never been real social progress without sustained economic growth. Materialism must thus be tempered with Christian values and morals resulting in a shifting of the business focus from the maximizing of short-term profits to the enhancement of the well-being of society and the common good of the people. The realization that business is interconnected with the society at large, with people of all classes and levels of society, encourages the business milieu to help society achieve its highest potential by recognizing and actualizing its social responsibility.

Source: Evangelizing Presence: Living the Moral Life Today, by Pasquale T. Giordano, SJ, and Nancy Russell Catan. A BCBP Publication. Chapter 7, pp 118-129. This chapter discusses in greater detail the areas of moral concern that are listed in this article.