‘Putting Out Into The Deep’ at NAC 38

If this was not a wake up call for me, I would probably have been deaf and blind already. My “Lower Your Nets” Kapatiran column had found a comma but not a period back in 2016 as family and business concerns called me out from National service in the Mancom.

As I registered for the NAC 38 last December, it was as if God had put an EDSA billboard in front of my face. “Put Out Into The Deep.” Luke 5:4 had been my inspiration for many years in writing for the community under my byline.

So I knew I had to be in Subic for NAC 38 no matter what. So I paid as an early bird, booked a hotel and sat tight for the date to arrive. But almost two weeks before NAC 38, I was asked to book for a business conference on the very dates of NAC 38, April 25-28. Imagine my frustration as I cancelled all my NAC bookings and passed my hotel reservation to a happy couple who had decided to join NAC 38 at the last minute.

As the days went on I sadly told my Christian in Golf Association (CIGA) golfers group that I could not even play the NAC Golf event this year.

But with over a week to go before NAC 38, our principal called to say that our conference had to be cancelled! I could now go to the NAC! And if prayers could move mountains at that time it did. I registered in place of an early bird couple who had to back out, found a hotel and registered to play in the NAC 38 Golf event, all in the space of two days! This meant the “EDSA billboard” still remained on for me.

But there were more exclamation points along the way.

My NAC 38 celebration started at 3:45 am of Thursday April 26th, to wake up and drive alone to Beverly Place, San Fernando, Pampanga to play at the NAC 38 Golf tournament that I would have sorely missed.

As that day wound up, I ended up holding the NAC 38 Overall Low Gross Champion trophy for one of my best games yet at any of the past NAC golf events. Surprised? You bet I was surprised and all the more curious why I was being called to NAC 38. “Put Out Into The Deep.”

As I drove to Subic, our Programs and Services Director Rico Robles told me that I could use one of the hotel rooms because that couple friend of ours was not expected till Friday afternoon. Yes, I did not have a hotel room for Thursday night and I was given one for free! Surprised? Very surprised!

Therefore, I could not wait for the NAC 38 Friday assembly. What a sight awaited me! More than 5,000 BCBP brothers and sisters filled the massive Subic Convention Center. This number later grew to 5,500 the next day.

The first thought that entered me was this is close to how Jesus fed the 5,000. It was a crowd so huge that so many needs had to be addressed. I could see the concern on our North Luzon organizers and what more the disciples of Jesus in their day. It put a strain on transportation, venue, sound system, food preparations and crowd management. Complaints were to be expected as lines were long, space was limited and impatience was apparent. 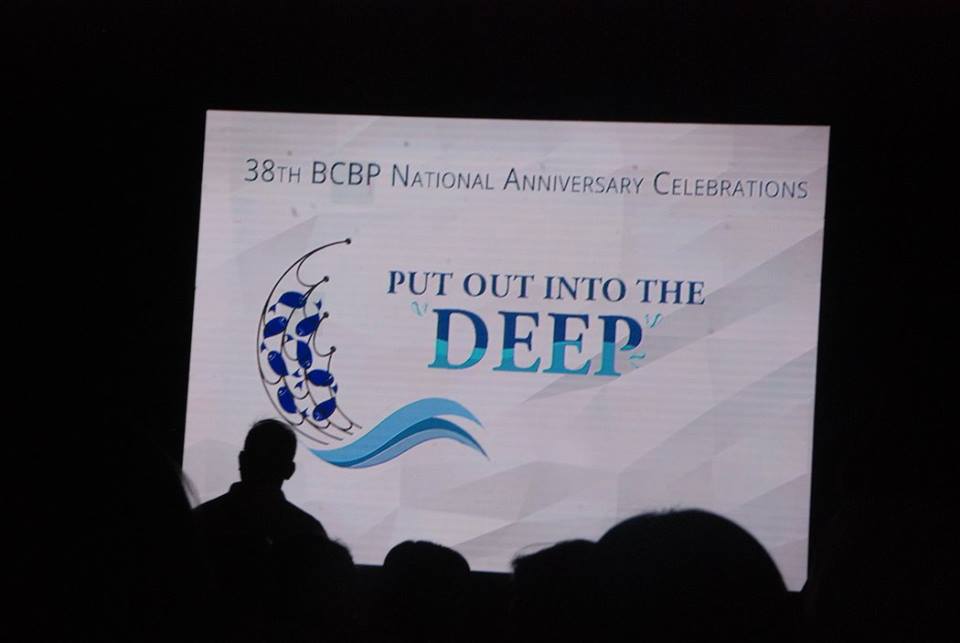 And yet the call was there, “Put Out Into The Deep!”

My thoughts raced back to the 5th National Strategic Planning Retreat when Pastoral Care came into the discussion and I was dumbfounded on how this could be accomplished by the BCBP leadership on a nationwide scale.

Just like the disciples, I asked, “Lord, how can we feed so many, we have only what we see before us?”

As I had expected our Community then to bloom some more on how could we become truly God’s people called by his name. An authentic Christian Community!

But as we all know, Jesus already knew at that time he faced the crowd of 5,000, he could feed a universal church in the billions from the time he would establish it under St. Peter.

But how was this to be done? What was the path to be followed? Even now in the Philippines, the Catholic Church seeks answers on how to build a community as the churches are filled to the rafters touching perhaps only 15 percent of the real Catholic Church population.

Our own clergy is numerically challenged pastoring to at least 40,000 believers for every one of them. Let us search for direction from our theme, “Put Out Into The Deep.”

Fast forward to May 4, 2018 on our First Friday teaching night. Sister Hazel Suarez of the Cenacle Sisters gave a talk on “Community Dynamics” to BCBP Makati. As she painted deep and broad strokes in her talk, it was apparent she was headed towards one of my deepest passions, Ignatian Spirituality.

Before her talk began she was already observing all of us on how we interacted with each other. She sensed some vibrancy in the atmosphere of our Makati community and yet challenged us “to go deeper.” I had described my own journey in Ignatian Spirituality as a personal “journey into my heart” to seek God there.

She then said that it is precisely the challenge she wanted all of us to undertake, to go deep within ourselves in pursuit of God, so that we can also be authentic to each other, more mature in agape love, hence moving onwards, away from a typical “barkadahan” that many action groups have become or what we jokingly refer to as the “Party List,” or people in BCBP who are present only for the social side of the Community, but not in Pastoring, Formation and Mission.

Framing the BCBP community within St. Ignatius’ Principle and Foundation is so apt because it is the call “to die to one’s self,” to step into that greater love of laying one’s life for others. This is the path of Christian leadership that will bring authentic love that will truly bear fruit, answering the call of the deeper challenge of Conquering the Marketplace.

Sister Hazel says that today’s call is for the laity to step up and certainly BCBP has that momentum and opportunity to respond to such a call, if it is willing to put out into the deep.