My life in the BCBP started when my wife Tess and I joined the community in 1998. Despite having tough times in life, we decided to hang on and serve in numerous ministries and capacities in the BCBP Calamba Chapter. In 2006, I became a migrant worker and flew to Nigeria for my first overseas assignment. Life was tough in Africa, having experienced being a hostage and narrowly missing two kidnap attempts. 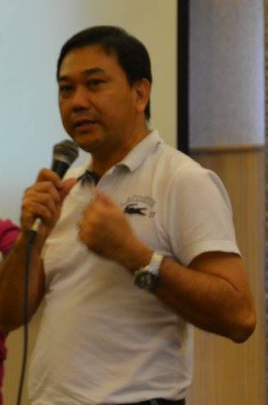 In November 2009, a devastating news came to me when Tess told me that she had breast cancer. She had to be operated on immediately, so I decided to resign and return to the Philippines to take care of her during her operation, chemotherapy and recovery.

God truly works in mysterious ways. 3 weeks later, the regional office of my current company called me and offered me a job in Bangkok. Truly this was God’s miracle, for this blessing would allow me to sustain and provide the needs of my wife in her recovery. The breast cancer operation done in Medical City was very successful. Then Tess stayed in Bangkok so that she could recover fast.

In 2014, I was asked if I could initiate a BCBP Breakfast in Bangkok. Anxious as I was, I still said yes, I will serve. Saying YES I said to myself… “Start a breakfast in Bangkok… how am I going to do it, Lord?”

Then came a meeting with Bro Louie Morales and several leaders of the BCBP at Seattle’s Best in Alabang, and the rest is history.

The biggest support came from Tess as she told me “Do it and serve well – You are commissioned, it is not by chance that you are called to this service. Our healing will come from the service that we will do. I will support you in all things that you need to do to make this breakfast successful.”

Give all you’ve got and God will do the rest . . . We decided to launch the 1st BCBP Breakfast in Bangkok on January 31, 2015 at Oakwood Hotel in Sukhumvit 24.

Our then AMD, Bro. Serge dela Fuente, told me that his son Jayvee and wife Cheye, members of BCBP Alabang but based in Bangkok, would support me. True enough, our Bangkok team together with help coming from Philippines were able to invite 11 first timers to our inaugural breakfast, with Bro. Bobby Atendido as our very first sharer. For several months, we managed the breakfast with a multi tasking approach including our being a tour guide. Help came continuously from Tess and my daughter, Josele, Jayvee and Cheye, and the mission team from the Philippines led by Bro Bobet Quiambao, our Chapter Head in Calamba and from Bro Pol Hernandez the RCD of STR 2.

In August 2015, we conducted the first Brotherhood Christian Life Program. I then took the role of the BCLP course leader. We had 10 successful graduates from this BCLP 1 who formed our first action group. I consider as one of the biggest achievements of the BCLP the decision of a couple, who have been married under civil rites for 10 years, to get married in Church right after the BCLP.

In January 2016, I returned to the Philippines as part of my company’s restructuring program. While we were sad because of the unexpected transfer, I was glad to be back and to serve as a member of the BCBP Calamba governance as the chapter’s Family Life Director. Despite the distance however, Tess and I remain dedicated in helping the Bangkok Mission team.

In February 2016, the Lord gave me a blessing, the best gift that I have ever received from God. During her routine check up Tess’ oncologist declared that having survived cancer for 6 years now, Tess’ health condition was back to normal, in the same condition as before she had cancer. Praise God.

Brothers and sisters, the Bangkok mission is about the sacrifice of all the men and women of the BCBP especially the financial support of every member through the International Mission Fund. It is about the time spent by the sharers, the unconditional support of the mission team, about the prayer warriors from STR1 and STR2, and the support from BCBP National Leadership. Most of all it is about the joy of service that everyone feels in helping make the Mission a reality.

I thank the Lord for this fulfilling service to trail blaze for BCBP in a foreign land. The passage in Philippians 4:22 really came true for me – “I can do all things in Him who gives me strength.”

May God continue to bless and strengthen our Bangkok mission.

CANADA: WE CAME, WE SAW, BCBP IS CONQUERING

BCBP: A VITAL MOVEMENT OF THE 2ND WAVE...

THE LORD ASKED ME “WHY DO YOU STILL...

My wife and I, BCBP Mandaue Chapter members, will be in Bangkok from May 10 to May 14. If there be br akfast meeting on the 12th, would like to attend. I understand it is a men.’s breakfast. I will be staying in City House during our stay in Bangkok. How far is it from the breakfast venue? Thank you. Emil