I broke my foot last March. At the last place where anyone would think could happen – In a golf course. And I wasn’t even hit by a golf ball or a wayward swing. It happened whilst I was “safe” on a cart path. I felt something moving below my right foot as I was about to get on a golf cart. It was the edge of the concrete cart-path crumbling to the soft ground below. I sustained skin scratches on my right leg as it made contact with the concrete. And I thought that was it. This will heal easily I told myself.

But as I was getting off the golf cart onto the ground I felt pain in my LEFT foot. I had failed to notice it also caught my body weight in an awkward position earlier. I never finished the game with my UP Alumni friends. An alumni orthopedic doctor advised me to have my foot checked for fracture. The other alumni – lawyers, one was even a justice of the Ombudsman, assured me that they can sue the golf course for indirectly causing my injuries. I could hope to gain something, but sadly for government courses like Veterans one may win the case but the course may or may not be able to pay.

This accident started a series of friendly jests from golfing friends. “Golf is a dangerous sport.” “God is punishing you because you played on Holy Thursday” to which I replied: “And so did 200 other people on March 24 Holy Thursday” . . . . Why me???

Fracture was confirmed by x-rays. It was called “pseudo-Jones” fracture common to dancers and active athletes. Heals by itself with no surgery. I thought I’d get over this easy as it would just require a removable splint by my orthopedic doctor Beng Javier. Himself a golfer. Himself tore his Achilles tendon and had his foot in a cast for weeks. But Doctor said “No,” and a nice looking fiberglass cast was placed on my left foot for six looooong weeks.

The struggle with this cast was a life changer and turned out to be a lesson in mental and self-discipline. My own mind messed up with me with such things as the ankle was rubbing against the fiber glass causing an abrasion which I couldn’t see, itchiness set in on those hardest to reach areas, etc etc. I went back to the doctor asking him to remove or change the cast to a removable splint so I could scratch. The doctor, himself a golfer refused saying that it was the only way I could get back to the course by June. My mind was indeed messing me up he said. What proceeded next was a crash course on mental discipline, including a revealing principle in golf biomechanics.

Golf is, in reality, an awkward sport – for instance, you hit with your left arm if you are right handed. You swing sideways to the target instead of facing it directly – weird, awkward. However, God gave each of us a UNIQUE set of bones that move together in their own UNIQUE way. ..that is, the way God meant your body to move – and play golf. God designed your body play this awkward sport in its own way. Not the way your pro nor the golf videos tell you.

I have written so many times about this — it’s almost boring – Practice. In this writing the take-home message is: Make peace with your body and recognize the way your body was made to move and play golf. Practice. Play. Often. This is the real and unrecognized purpose of practice.

If you are unable to make a full swing around your waist like a much younger Rory McIlroy, then don’t. Turn only as far as YOUR body allows or better yet, lose weight and some of that belly. If you insist on getting a pro, pick one with a similar build and height as you, to lessen the variables. I myself had to reduce all my shafts by at least 1 centimeter. The putter that I use is only 31 inches – so short that it looks like it came from Toy Kingdom. All this to adapt to my mere five feet four inch height. And if you are familiar with the game, you’ll know that that my height is not even two feet higher than a standard driver length. An upright driver is taller than my midsection. 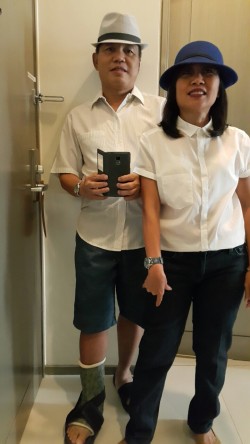 Thus, I had to depend on other factors, other than club length, for swing speed – such as a shorter but much lighter club weight. A favorite saying from golf professionals, especially club fitters, goes like this: “There is no one perfect swing. But there is a different perfect swing for each person. Practice often and make friends with your own body and its unique movements. Practice to find your natural range of motion according to your height and build.

I recovered rather quickly. Allow me to attribute that to persistence in attending BCBP events even whilst wearing a cast. Including getting on a plane to Cebu to attend the 2016 BCBP Anniversary! God is Good. I finally played my first two post-fracture games last week . . . with BCBP Makati CIGA brothers of course. And if there are any lessons to be recalled from this broken foot, they would be:
1- Keep your left foot quiet (even though the fiberglass cast has been removed)
2- Avoid overthinking. Just make the swing your own body allows you to.
3- Stop further thinking; and swing.

Forgive me but I can’t close with my usual Scriptural verse. “Know thyself” is more fitting at this time – an ancient Greek idiom. Perhaps even “To thine own self be true.” … by Shakespeare.

BIBLE STUDY SHOULD BE A FAMILY HABIT