Let me share with you a “dream” of mine of 1983 about the BCBP that was published in Kapatiran, the BCBP magazine then. In the future every major city in the Philippines, Asia, and the rest of the world would have a chapter of the BCBP. In every business center of the world Jesus would be acclaimed as Lord and the business world and that of the professions would be transformed by honesty and integrity. In 1983 there were just three chapters: Makati, Alabang and Greenhills. I foresaw future anniversaries of the BCBP where these three chapters would be joined by chapters from the rest of the Philippines, Asia, and the rest of the world. 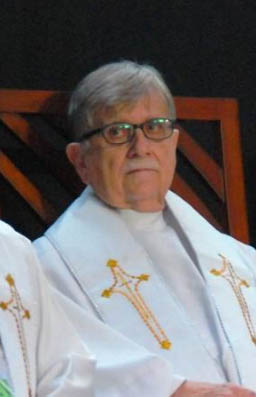 My brothers and sisters, this dream or rather this prophecy is slowly becoming a reality. Today every major business center of the Philippines has a chapter, outreach, or mission of the BCBP. The BCBP has reached the United States and Canada. By the end of this year there will be two other chapters besides Los Angeles in the US and Toronto, Canada, namely West Covina and San Francisco, besides outreaches or missions in many other places in the US and Canada.

By August we will have the first chapter in Asia outside of the Philippines in Singapore. Plus there are breakfasts in Jakarta and Bangkok and possibly soon one in Hong Kong.

Look around you this morning and you will see what I said in ‘83 being fulfilled in your presence. Makati, Greenhills, and Alabang are joined in this our 36 Anniversary by Chapters and Outreaches and Missions from all over the Philippines, by representatives of the chapters in the States and Canada, and by the outreaches and breakfasts in Asia. I am convinced it is only a matter of time before a breakfast or mission will be opened in Europe, Australia or New Zealand.

This should not surprise you. Our God is a God on mission. He wants all to be saved. He gave up his only son in order that those who believe in him might be saved and have life in its fullness.

God called the BCBP into existence in order to bring Christ into the marketplace of the entire world and to win that marketplace for Christ. Never in all the history of the BCBP did the Lord ever say to the BCBP leadership that our mission field was to be restricted only to the Philippines. This would be impossible simply because Filipinos and BCBP members are already everywhere in the world. We Filipinos are truly the first true citizens of the world and our mission field can thus never just be the Philippines alone.

Let me re-phrase a passage from chapter 3 of the Gospel of John: “God loved businessmen and professionals so much that he gave up his only Son in order that these men and women might not perish but have everlasting life.”

To bring this about our Lord called the BCBP into existence. He taught us how to evangelize through the breakfast, he gave us the support of our BCBP community, he poured out his Spirit on us in great abundance to make us bold and fearless to set out for the deep. He filled our hearts with the fire of his love so that we could set the world on fire.

God has done his part. Will we do our part? God gave up his most precious possession, his only Son. Are we ready to make the sacrifices needed to bring the Gospel of joy and the BCBP to the rest of the world of business and the professions? Will you support this God-given international mission by making yourself available to serve and by supporting it with your material and financial resources?

Will you be God’s partner in bringing Christ into the marketplaces not only in the Philippines, Asia, or North America, but in the rest of the world?

I am organising an Asian Catholic Business and Professionals Mtg on the 7,8&9 December 2016 ( this year ) I want to invite as many of you as possible. Details on the website: www:acbpa.org
I am a Redemptorist. Baclaran can fill you in on me.
God bless you.
FR Neil Dias Karunaratne
karunaratne31@gmail.com