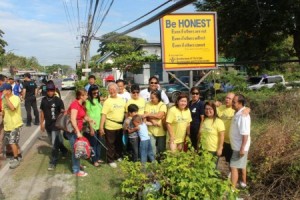 Acts 2:42-47 ” They devoted themselves to the teaching of the apostles and to the communal life, to the breaking of bread and to the prayers. Awe came upon everyone, and many wonders and signs were done through the apostles. All who believed were together and had all things in common, they would sell their property and possessions and divide them among all according to each one’s need. “

In 1991, the BCBP reached the shores of Misamis Oriental, specifically in Cagayan de Oro city which is geographically situated in the northernmost tip of the island of Mindanao. It was brought by a combined mission team from Cebu and Makati in Metro Manila. They were a bunch of dedicated and determined businessmen and professionals empowered by the Holy Spirit to bring the values espoused by our Lord Jesus Christ into their respective areas of responsibilities- their marketplaces . And awe came upon the people of Cagayan de Oro especially when they observed them in their ways and behavior acting like the early Christians.

One of the members of that team was a professional who was into advertising in Metro Manila. True to his profession, he came, he saw and he conquered the hearts and mind of “kagayanons” and the members grew in number. The group launched an advertising campaign, not a commercial one but to advertise in the business and professional sector the values espoused by our Lord Jesus Christ. To some these values were not new, only that they needed to be rekindled in their hearts and minds and that tasked fell on the hands of these new breed of businessmen and professionals.

This professional advertiser made an impact in our lives. His conversion, as he would share with us his life testimony, was a 180 degree turn and not a 360 degree or else we would go back to the old self, he said. We learned more of him later when he became our national president.

The BCBP can be likened to his field of specialty. We are assigned to be His advertisers. In short the members are the billboards of this community. God uses us as billboards to advertise His product. We are tasked to bring His son’s values into our marketplaces and winning the marketplace for His son. Mark 4: 21-23-“No man, when he has lit a lamp puts it under a bed but puts it on a lampstand, That those who enter may see the Light “.

The lamp in this parable is the same lamp that was brought to us by that bold mission team of businessmen and professionals from Cebu and Makati. We must share it to other people. Billboards are placed in strategic places and conspicuous areas for all people to see and appreciate. Billboards have bright neon lights so that when darkness starts to engulf the environment, the advertised product persists in the minds of people. The BCBP community, its members, everyone of us are the billboards because in us exudes the values espoused by our Lord Jesus Christ. We don’t even have to stand on platforms and make speeches . We just need to walk our talk.

When we started to grow in number in the city , our colleagues in our marketplaces took notice of us. They were awed and intrigued by our behavior. “Makisali nga” , sabi ng iba. We changed our lifestyles from darkness to light. We were bold to share Jesus to every colleague and person we meet. “Wala ng makapagpigil’ika nga’.”

In Cagayan de Oro , our first baptism of fire came when we took to the streets to protest the launching of the Casino in the city. We put up road blocks leading to the venue. We were joined by other church organizations spearheaded by Monsignor Rodolfo Roa of the archdiocese of Cagayan de Oro city. Empowered by the Holy Spirit, we were in the forefront in all of these. We fought a good fight, and we claimed the victory for Jesus Christ. Up to this writing, the Casino did not, does not and will never be able to operate in the city.

With the passage of the RH bill also known as House bill 4244, there is so much fear and anxiety of what is going to happen to our country and to the whole world . We all know the serious consequences that will befall mankind just as long ago , God warned His chosen people if they disobeyed His laws — “they would reap what they sow”. Jeremiah 2:17-19. Moses warned the ancient Israelites “that evil will befall you in the latter days, because you will do evil in the sight of the Lord, to provoke Him to anger”. Deuteronomy 31:29.

Today behavior once frowned upon and punished like stealing, lying, adultery, corruption in the gov’t, homosexuality and same sex marriages, appear to be ‘normal’. We see a resurgence of this old prevailing view of the world. We also see the re-emergence of scoffers and critics who are attacking the teachings of Jesus, that God is an illusion and a delusion, that God is dead, that the bible is “is just plain weird filled with obnoxious doctrines”.

The BCBP is challenged again to answer God’s call ” Go…I am with you …” We must be in the forefront of fighting the forces darkness. Let us put up and increase our billboards in our communities.

Unless we can stem the tide of this culture of death and corruption, only then can we appease the wrath of God. Only then can we prevent our world from becoming another Babylon.

AN OPEN LETTER TO FR. HERB