POPE FRANCIS’ LENTEN MESSAGE 2014: THE GOSPEL IS THE REAL ANTIDOTE TO SPIRITUAL DESTITUTION 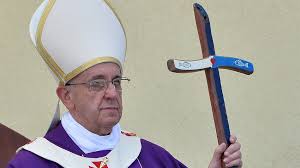 As Lent draws near, I would like to offer some helpful thoughts on our path of conversion as individuals and as a community. These insights are inspired by the words of Saint Paul: “For you know the grace of our Lord Jesus Christ, that though he was rich, yet for your sake he became poor, so that by his poverty you might become rich” (2 Cor 8:9). The Apostle was writing to the Christians of Corinth to encourage them to be generous in helping the faithful in Jerusalem who were in need. What do these words of Saint Paul mean for us Christians today? What does this invitation to poverty, a life of evangelical poverty, mean to us today? 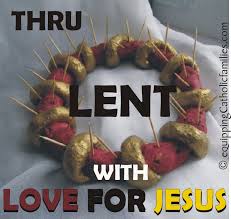 First of all, it shows us how God works. He does not reveal himself cloaked in worldly power and wealth but rather in weakness and poverty: “though He was rich, yet for your sake he became poor …”. Christ, the eternal Son of God, one with the Father in power and glory, chose to be poor; he came amongst us and drew near to each of us; he set aside his glory and emptied himself so that he could be like us in all things (cf. Phil 2:7; Heb 4:15). God’s becoming man is a great mystery! But the reason for all this is his love, a love which is grace, generosity, a desire to draw near, a love which does not hesitate to offer itself in sacrifice for the beloved. Charity, love, is sharing with the one we love in all things. Love makes us similar, it creates equality, it breaks down walls and eliminates distances. God did this with us. Indeed, Jesus “worked with human hands, thought with a human mind, acted by human choice and loved with a human heart. Born of the Virgin Mary, he truly became one of us, like us in all things except sin.” (Gaudium et Spes, 22).

By making himself poor, Jesus did not seek poverty for its own sake but, as Saint Paul says “that by his poverty you might become rich”. This is no mere play on words or a catch phrase. Rather, it sums up God’s logic, the logic of love, the logic of the incarnation and the cross. God did not let our salvation drop down from heaven, like someone who gives alms from their abundance out of a sense of altruism and piety. Christ’s love is different! When Jesus stepped into the waters of the Jordan and was baptized by John the Baptist, he did so not because he was in need of repentance, or conversion; he did it to be among people who need forgiveness, among us sinners, and to take upon himself the burden of our sins. In this way he chose to comfort us, to save us, to free us from our misery. It is striking that the Apostle states that we were set free, not by Christ’s riches but by his poverty. Yet Saint Paul is well aware of the “the unsearchable riches of Christ” (Eph 3:8), that he is “heir of all things” (Heb 1:2).

So what is this poverty by which Christ frees us and enriches us? It is his way of loving us, his way of being our neighbour, just as the Good Samaritan was neighbour to the man left half dead by the side of the road (cf. Lk 10:25ff). What gives us true freedom, true salvation and true happiness is the compassion, tenderness and solidarity of his love.

Christ’s poverty which enriches us is his taking flesh and bearing our weaknesses and sins as an expression of God’s infinite mercy to us. Christ’s poverty is the greatest treasure of all: Jesus wealth is that of his boundless confidence in God the Father, his constant trust, his desire always and only to do the Father’s will and give glory to him. Jesus is rich in the same way as a child who feels loved and who loves its parents, without doubting their love and tenderness for an instant. Jesus’ wealth lies in his being the Son; his unique relationship with the Father is the sovereign prerogative of this Messiah who is poor. When Jesus asks us to take up his “yoke which is easy”, he asks us to be enriched by his “poverty which is rich” and his “richness which is poor”, to share his filial and fraternal Spirit, to become sons and daughters in the Son, brothers and sisters in the firstborn brother (cf. Rom 8:29).

It has been said that the only real regret lies in not being a saint (L. Bloy); we could also say that there is only one real kind of poverty: not living as children of God and brothers and sisters of Christ.

We might think that this “way” of poverty was Jesus’ way, whereas we who come after him can save the world with the right kind of human resources. This is not the case. In every time and place God continues to save mankind and the world through the poverty of Christ, who makes himself poor in the sacraments, in his word and in his Church, which is a people of the poor. God’s wealth passes not through our wealth, but invariably and exclusively through our personal and communal poverty, enlivened by the Spirit of Christ. 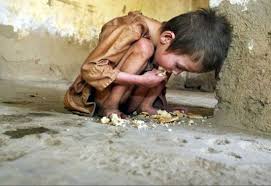 In imitation of our Master, we Christians are called to confront the poverty of our brothers and sisters, to touch it, to make it our own and to take practical steps to alleviate it. Destitution is not the same as poverty: destitution is poverty without faith, without support, without hope. There are three types of destitution: material, moral and spiritual. Material destitution is what is normally called poverty, and affects those living in conditions opposed to human dignity: those who lack basic rights and needs such as food, water, hygiene, work and the opportunity to develop and grow culturally. In response to this destitution, the Church offers her help, her diakonia, in meeting these needs and binding these wounds which disfigure the face of humanity. In the poor and outcast we see Christ’s face; by loving and helping the poor, we love and serve Christ. Our efforts are also directed to ending violations of human dignity, discrimination and abuse in the world, for these are so often the cause of destitution. When power, luxury and money become idols, they take priority over the need for a fair distribution of wealth. Our consciences thus need to be converted to justice, equality, simplicity and sharing.

No less a concern is moral destitution, which consists in slavery to vice and sin. How much pain is caused in families because one of their members – often a young person – is in thrall to alcohol, drugs, gambling or pornography! How many people no longer see meaning in life or prospects for the future, how many have lost hope! And how many are plunged into this destitution by unjust social conditions, by unemployment, which takes away their dignity as breadwinners, and by lack of equal access to education and health care. In such cases, moral destitution can be considered impending suicide. This type of destitution, which also causes financial ruin, is invariably linked to the spiritual destitution which we experience when we turn away from God and reject his love. If we think we don’t need God who reaches out to us though Christ, because we believe we can make do on our own, we are headed for a fall. God alone can truly save and free us. 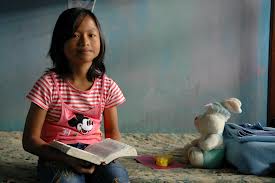 The Gospel is the real antidote to spiritual destitution: wherever we go, we are called as Christians to proclaim the liberating news that forgiveness for sins committed is possible, that God is greater than our sinfulness, that he freely loves us at all times and that we were made for communion and eternal life. The Lord asks us to be joyous heralds of this message of mercy and hope! It is thrilling to experience the joy of spreading this good news, sharing the treasure entrusted to us, consoling broken hearts and offering hope to our brothers and sisters experiencing darkness. It means following and imitating Jesus, who sought out the poor and sinners as a shepherd lovingly seeks his lost sheep. In union with Jesus, we can courageously open up new paths of evangelization and human promotion.

Dear brothers and sisters, may this Lenten season find the whole Church ready to bear witness to all those who live in material, moral and spiritual destitution the Gospel message of the merciful love of God our Father, who is ready to embrace everyone in Christ. We can so this to the extent that we imitate Christ who became poor and enriched us by his poverty. Lent is a fitting time for self-denial; we would do well to ask ourselves what we can give up in order to help and enrich others by our own poverty. Let us not forget that real poverty hurts: no self-denial is real without this dimension of penance. I distrust a charity that costs nothing and does not hurt.

May the Holy Spirit, through whom we are “as poor, yet making many rich; as having nothing, and yet possessing everything” (2 Cor 6:10), sustain us in our resolutions and increase our concern and responsibility for human destitution, so that we can become merciful and act with mercy. In expressing this hope, I likewise pray that each individual member of the faithful and every Church community will undertake a fruitful Lenten journey. I ask all of you to pray for me. May the Lord bless you and Our Lady keep you safe.

HOW CAN YOU FIND YOUR LOST TIME?

HOW SHOULD WE AS BCBP WOMEN CELEBRATE MARCH AS NATIONAL WOMEN’S MONTH?