THE JESSE ROBREDO IN US 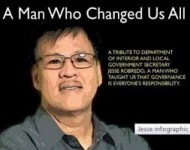 So many accolades have been given to Jesse Robredo…. now that he has joined OUR creator. I ask myself, “Why is it only now that the media is giving the honoring?” The most probable reason is his maintaining a low profile inspite of his being an achiever.

I never had the chance of meeting him personally but have wished I had met him, after all the positive notes on his character … an excellent Be Honest hall of fame awardee. ( I hope a member of the BCBP Naga Chapter reads this article.)

The Media coverage of his accomplishments and awards, and the testimonies given through the press and blogs give me an understanding of who Jesse Robredo was as a public servant, as a husband, and as a father. The traits about him that I admire most are – simplicity, honesty, and integrity.

SIMPLICITY – He had quite a modest home for a City Mayor who served for 18 years. He was known for his “tsinelas”, a very comfortable footwear that shows your true self with no pretense. Unlike the scene stealers wearing their “sine-las”! He was indeed a man for all in his dealing and rapport with his constituents. He would join the garbage collection crew in making the routinary collections. I believe this exercise put his feet on the ground and made sure they stayed on the ground.

HONESTY –The simplicity in his person speaks for his honesty and humility combined. He would rather be home on weekends than oblige himself to social functions with the who’s who in the business circle, with the accomplished professionals, and the top brass in government.

INTEGRITY – Jesse was dedicated to his work and never compromised his duties and responsibilities. I believe that Jesse never short changed the goverment but gave more of himself as a Ramon Magsaysay awardee.

HOW CAN WE AS BCBP MEMBERS BE A JESSE ROBREDO? It can be done IF only we are diligent in attending the BCBP talks and digesting them by slowly putting these teachings into practice. I would like to suggest some ways …

SIMPLICITY in the Christian home … make it comfortable for yourself, your children, and most specially for the household helpers. Expensive crystals and cut glass as decor are nightmares for the household helpers as part of their regular cleaning chores. Your children, specially at the “terrible two” age, cannot differentiate a Murano cut glass or a Lladro figurine from their GI Joe or Barbie dolls. Why buy expensive carpets and furnitures when your guests are afraid that their shoes will leave markings and your velvet sofa might be stained by their coffee drippings.

SIMPLIFY. Buy what you need and not for show casing. Just like the “tsinelas” of Jesse, make your home comfy, inviting, and hospitable in hosting action group meetings. Avoid “sine-las”… donate such items to charitable institutions who can auction the items to provide their basic needs – food and utility expenses.

BE HONEST by learning the virtue of humility exemplified by Jesus’ washing the disciples feet. Wash others’ feet! Holy Week is a most appropriate time to do this to our BCBP members and better to include our subordinates in our workplace. … One of my workplaces is the pineapple plantation in Bukidnon … imagine my farm workers enjoying their foot spa!

INTEGRITY in your dealings with your suppliers, clients, and work force. Say NO when you mean NO or YES when you mean YES … in- between may mean you have not matured as a BCBP member.

THE BCBP CHALLENGE – Can we honestly proclaim: YES, the spirit of Jesse Robredo is in us.

THE CHALLENGE OF SAVING SOULS

GRATITUDE UNLOCKS THE FULLNESS OF LIFE

I am writing this without the approval of my beloved Chapter Head of Naga, Dr. Vic Maninang because I am temporarily based in Quezon City, but my personal
knowledge about who Jesse Robredo really is, must somehow be said sometime.

Jesse was a ‘close’ friend. The apostrophe represents the arms-length distance we both have to keep: I, being Chairman of the Board of the Naga Coca-Cola Employees Coop (Region-wide coverage and open to all institutions) for almost ten consecutive years, refused to be closely associated with politicians for all the negative connotations this entails; and Jesse, because he respected my wishes. Jesse however, was always approachable in all our needs. The coop’s own land and building in the main commercial center of the city and our very own housing, “Cokeville” in San Felipe, Naga City are solid, if not concrete proofs of his support. Our officers always questioned me why Jesse was always the Guest Speaker during the Annual General Assembly for almost ten consecutive years, I just smiled and said that he is my kind, a rare breed of a politician. I never used my friendship for personal favors from him because I was afraid I will not be able to reciprocate when and if he asks for something in return.

Once, my wife and I were in a street leading to where chicken were sold at discount prices and I did not see that Jesse was there too, it was Jesse who approached us first to make small talk! He really had no special airs, just his simple ‘tsinelas’ self always, no wang-wangs, no body guards! A portrait of a good man who is not afraid because everyone is his friend and has no enemies in the world who could wish to do him harm!

In hindsight, what really makes me admire him most is his devotion to INA, Our Lady of Penafrancia. I tried to copy what he did this year by joining the Traslacion on foot, and it was what really opened my eyes. Mama Mary was understanding of my plight so she made it rain so hard so the soles of my feet would not end up like chitcharon, but grains of sand and pebbles still hurt though and my clothes clung to my skin after the rain. I did not even dare come close to the mob grappling with each other to get a hand on the “andas” because (despite spending 8 years studying to become an SVD)the very stench of perspiring and mostly drunk hoard of wild men, some with horrible B.O. made me cringe in revulsion. And to think Jesse has been doing that since he was sixteen, only deep devotion from an Atenean/La Salle graduate (or like most of them, blind superstition)could make one dare such a feat! And Jesse did that every year! All I can do is shake my head and say is Tsk! Tsk! Tsk!

Chairman Bong:
Thank you for the wonderful honoring of the late Sec. Robredo.

Certainly he does all Filipinos proud.

I would like to second your view that he epitomizes our Be Honest campaign.

A thought– why not propose that the BCBP community kick-off its acknowledgent of honest filipinos with an award, albeit posthumously, to Sec. Jesse Robredo, who in his life and public service, epitomized the values that Christ himself asks us to uphold?

What a beautiful piece ! I heard Jesse Robredo was a breakfaster in Naga. He was here several times in CDO but we also never had the chance to see him in person.The local politicians relished all by themselves , his presence pero hindi na siya bumalik- nakapa taas ng kilay! Anyway, the “save cdo ” movement is on.

Truly, we need more Robredo in our midst, in the BCBP, like putting the Be Honest stickers in our cars. Tinangap ang sticker for free from the PSD head ngunit ayaw e stick sa car. Haay, naku!