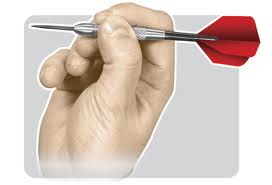 A young lady named Sally, relates an experience she had in a Religion Class, given by her teacher, Dr. Smith. She says Dr. Smith was known for his elaborate object lessons.

One particular day, Sally walked into class and knew they were in for a fun day. On the wall was a big target and on a nearby table were many darts. Dr. Smith told the students to draw a picture of someone that they disliked or someone who had made them angry, and he would allow them to throw darts at the person’s picture.

The class lined up and began throwing darts, with much laughter and hilarity. Some of the students threw their darts with such force that their targets were ripping apart. Sally looked forward to her turn,and was filled with disappointment when Dr. Smith, because of time limits, asked the students to return to their seats. As Sally sat thinking about how angry she was because she didn’t have a chance to throw any darts at her target.

Dr. Smith began removing the target from the wall. Underneath the target was a picture of Jesus…..

A complete hush fell over the as each student viewed the mangled picture of Jesus; holes and jagged marks covered His face and His eyes were pierced. Dr. Smith said only these words….. “In as much as ye have done it unto the least of these my brethren, ye have done it unto Me.” Matthew 25:40

1. In what ways did this story touch you?
2. Share about the times that you have thrown darts. What kind of darts did you throw? How did you feel afterwards? How do you think the other person felt when hit by your darts?
3. What kind of darts thrown at you have hurt you? Why did they hurt you?
4. In what ways can you avoid throwing darts in the future?

WHAT IS YOUR SONA?