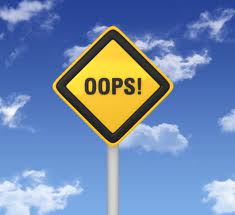 1 Corinthians 10:12 says: “So if you think you standing firm, be careful that you do not fall!”

At the Royal Lytham in England, everyone expected Scott to win . . . after all Ernie Els was ranked 40th in the world and coming into The Open trailed by as much as 7 points in the front nine coming into the last round. He was even uninvited and ignored at the last Masters Tournament in Augusta last May.

Els now has a place in history as one of the 6 players to win both the US AND British Open twice. That is not all, Els is the first male golfer to win a Major AFTER being inducted into the golf hall of fame since Lee Trevino in 1981.

Adam Scott, in turn, started the front nine, with a 4 point lead. The painful hole-by-hole meltdown was classified as one of the Top Ten memorable collapses/chokes in golf history – third placer, in fact by Golf.com. No, it was not one of those spectacular collapses when everything was over and knew the winner by hole No. 16. Adam Scott, just a few holes back, was in fact leading him by 4 points when Ernie Els birdied a long putt on the 18th to score a final round 68 vs Scott’s 75.

Scott had 4 holes to go. All he had to do was simply to par the last four holes- perhaps only two – that’s it – first Major. It was up to him to win it whilst Ernie Els helplessly hoped, at best, for a playoff, whilst waiting at the practice green. Scott, unbelievably, bogied all four holes including a heart breaking missed putt on the 18th which could have forced the playoff. Slow death – unforced – self-induced was the prevalent media description.
Corinthians 10: 13 No temptation[c] has overtaken you except what is common to mankind. And God is faithful; he will not let you be tempted[d] beyond what you can bear.”

Life outside golf is also full of unforced errors or ones which we have caused unto ourselves. Maybe you were late for an assembly not because of traffic but because you had simply left your office quite late. Perhaps Psalm 19 may help guard against it. 9 The fear of the LORD is pure, enduring forever. The decrees of the LORD are firm, and all of them are righteous. . . . 11 By them your servant is warned; in keeping them there is great reward.12 But who can discern their own errors? Forgive my hidden faults. The last line is specially revealing. Only you yourself, with a lot of the Lord’s help, can discern and correct your unforced error.

No one will ever know perhaps what really caused Scottie to collapse and give away the Claret Jug. Losing confidence in yourself or perhaps overconfidence are both temptations. Perhaps Scott gave in to these temptations when he missed a three foot putt on the 16th which cut his lead by only 1 and heard the cheering for Ernie across the course. He knew his lead was reachable by Els who ironically will be resting in the clubhouse. As he was being unnerved in the last four holes, you wished he had thought of things like “Be still and know that I am God” from Psalm 46:10. Instead I seemed to hear things from Matthew 14:31 : “Oh man of little faith, why did you doubt?” Indeed, doubt – self doubt – caused these unforced errors.

1 Corinthians 10:13 But when you are tempted,[e] he will also provide a way out so that you can endure it.

And Adam Scott did endure it at the awarding ceremony as he bravely put on a calm smiling demeanour. Ernie Els called him his golf buddy. TV commentator said things like, “that missed putt will leave him scarred for life” “tears are not far away, looks like” and finally “Scott goes to face the inquisition (media) after making his last bogey putt”
Adam Scott will endure it. He still won US$ 850,000.00 and still has lovely Tennis Star Ana Ivanovic.

But yet one final thought please. Perhaps Romans 8:31 “If God can be for us, who can be against us.” Recall the words of this year’s winners Bubba Watson at the Masters and Zach Johnson at the John Deere Classic. The first words they uttered after winning (and not collapsing) were: “I would like to thank my Lord and Saviour Jesus Christ.”

SHIFT FROM LOCAL TO GLOBAL THINKING