In her Sheila Reports, April 24, 2012, journalist Sheila Liaugmina comments on the ongoing controversy in the USA on budget planning. It seems that Congressman Paul Ryan’s budget plan, based on the moral standards espoused by Catholic Social Teachings, is arousing a lot of divisive concerns. Her views are worthy of reflection on how we, businessmen and professionals, do our own budget planning.

Sheila Liaugmina is one of the leading journalists for MercatorNet, a website devoted to culture, politics, faith and reason. She says that Congressman Paul Ryan’s budget plan, based on the moral standards espoused by Catholic Social Teachings, is arousing a lot of divisive concerns. We share her commentary with our BCBP readers as a good example of what the BCBP is all about — bringing Christ into the marketplace, and bringing the marketplace to Christ. Paul Ryan is focusing on Christian moral values in defining budgetary policies to help those who most need help. He is following our 2012 theme: “Go, I am with you!” Would that all of us BCBP businessmen and professionals had his courage and conviction! 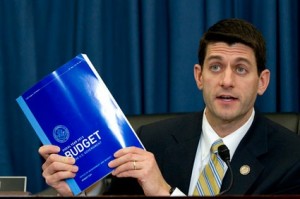 Morality has always been such a relative term. It seems more so these days.

Between politics and the economy, which is probably redundant, ‘the right thing to do’ has become a sliding scale with the ruling hand tilting it toward what’s most pragmatic for them.

So it’s no surprise that the media have not been particularly amenable to Cong. Paul Ryan’s budget plan, especially since the Republican controlled House passed it and President Obama is actively campaigning against it.

Ryan claims Catholic Social Teaching helped him shape the budget. Over the past year and a half, those of us paying attention to the process (media policy wonks, mostly) noticed that Ryan was in dialogue with Cardinal Timothy Dolan, President of the US Bishops’ Conference, while he was crafting it.

Which was not particularly appreciated by liberal intelligentsia.

Once again, the Campaigner in Chief threw the switch himself, calling the Ryan House budget “social Darwinism,” “a Trojan horse” and “antithetical to our entire history.” Rev. Samuel Rodriquez of the Hispanic Evangelical Association said the poor would be “budget-war collateral damage.”

On Tuesday, Mr. Ryan pushed back. In an interview with the Christian Broadcasting Network, he said that in fact the Catholic Church’s “social magisterium” had informed his House budget. One goal of that teaching, he said, is to prevent the poor from staying poor. Nor, he added, should individuals become lifelong dependents of their government.

Just as the left thought the regulating reach of the Commerce Clause was beyond serious challenge, it long ago decided that none dare question the moral case for public spending. That social Darwinism speech Barack Obama is giving now in defense of federal programs isn’t merely a public-policy statement. It’s a Democratic encyclical. Paul Ryan’s ideas are worse than wrong. They are heresy.

Within the hour of the Ryan CBN interview, the blogospheric left went ballistic. “Ryan is shilling for the Catholic Church,” said Democrats for Progress, folding in another recently identified group of ObamaCare heretics. And: “Mr. Ryan has drunk the libertarian Kool-Aid.” A pro-spending religious coalition, the Faithful Budget Campaign, emailed, “The differences in what the organized religious community is calling a Faithful Budget and what Rep. Ryan refers to could not be more stark.”

What Mr. Ryan actually said is worth quoting, because it should revive the debate over the proper relationship between individual citizens, including the poor, and the national government:

“A person’s faith is central to how they conduct themselves in public and in private. So to me, using my Catholic faith, we call it the social magisterium, which is how do you apply the doctrine of your teaching into your everyday life as a lay person?

“To me, the principle of subsidiarity . . . meaning government closest to the people governs best . . . where we, through our civic organizations, through our churches, through our charities, through all of our different groups where we interact with people as a community, that’s how we advance the common good. By not having big government crowd out civic society, but by having enough space in our communities so that we can interact with each other, and take care of people who are down and out in our communities.

“Those principles are very, very important, and the preferential option for the poor, which is one of the primary tenets of Catholic social teaching, means don’t keep people poor, don’t make people dependent on government so that they stay stuck at their station in life. Help people get out of poverty out onto a life of independence.”

“One in six Americans are in poverty today,” Congressman Ryan told Raymond Arroyo on EWTN’s The World Over in an interview Thursday, “yet we’ve thrown so much money at these programs. Why don’t we fix these programs so that they actually work to break the cycle of poverty?”

Of course, the current administration seeks to even more directly crowd out some of those charities and churches, by telling them they have to violate their consciences in order to serve people.

Which is a Ryan point too: These budgetary debates “are matters for prudential judgment. . . . People of good will can have differences of opinion on these kinds of issues — there’s plenty of room to disagree about how to advance the common good, advance these principles.” That’s what the laity in public life are called to do. Ryan is not presenting himself as the poster boy for Catholic social thought, but as a Catholic in public life taking Catholic moral principles seriously. “I cannot claim exclusive justification for my political philosophy and point of view on economics using the social magisterium any more than a liberal can for theirs,” Ryan said. “We have difference of opinions about how to use these principles to the problems and policies of the day. It’s not as if we are talking about violating a core principle like life or religious liberty here.”

Though some are, and want to deflect attention from that agenda. Quickly.

And it’s hard not to miss that the most prominent Catholic politician taking aim at Ryan, Connecticut congresswoman Rosa DeLauro, is a regular at abortion-rights rallies who voted against prohibiting partial-birth abortion; given that, her accusation that people will be “eviscerated” by his budget suggests a certain moral blindness.

I either missed something in that translation, or the grammar is just too jarringly incomprehensible to grasp.

Ryan’s plan is tough love, and he’s willing to fight for it. He told me on radio many of the same things he said on Raymond Arrroyo’s program, that he makes no exclusive claim on social teaching and Liberals shouldn’t either. That we’re currently subsidizing the connected and the cronies and falling dangerously into the trap that ‘Washington knows best.’