A FAITH OF TEARS: WHAT IS RIGHT ABOUT OUR CATHOLIC FAITH

Jesus said to his disciples, “Is a lamp brought in to be placed under a bushel basket or under a bed, and not to be placed on a lampstand? For there is nothing hidden except to be made visible, nothing is secret except to come to light. Anyone who has ears to hear ought to hear.” Mark 4:21-25 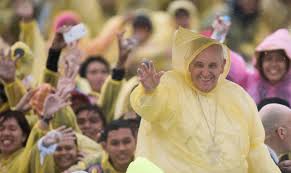 During the installation rites of our new Chapter Head for Makati, Bro. Ricky Siton, last January 7, 2015 I said in the closing remarks that there is no other exciting time to be a Catholic than now. I had said this with high expectations of what was to unfold in the coming historic trip of Pope Francis to Manila and Tacloban. Pope Francis has made no secret about his ‘living faith’ from the very onset of his papacy. His disarming simplicity shown by his preference for simple papal garb, taking public transport, paying for his hotel bill, living in simple quarters, washing of the feet of a Muslim woman and a consistent preference for the poor and infirm at best shows that the man knows who his Master is. He seems borderless in his loving ways much like Jesus was who was seen with disdain by the Pharisees for dining with tax collectors and prostitutes. His Holiness’ heart was already with us the day after Typhoon Yolanda had struck, wherein he felt a call he could not ignore to be there in Tacloban in person. Why? Why? Why?

Thousands of people have been there, government officials, NGOs, aid workers, soldiers, donors, local clergy and the like, to offer help in every single way. What was there so compelling that he had to be there himself despite the passing of so many months. There was a part of him that had to be given which probably was not so clear until that day would come to pass.

His arrival on January 15 was just a foretaste of what was to come. Millions of faithful and ordinary folk were drawn to the streets and all kinds of media to have an encounter with this extraordinary man of faith. Then, there was no holding back, as soon as he stepped off the jet plane, jubilation and tears came forth from greeters of all walks of life. Many could not explain their emotions, a mixture of joy, tears and speechlessness as soon as he would pass, offer his hand or a generous embrace. He offered no defenses preferring an open ‘popemobile’, and accepted the tightness of schedule, shuttling him from one point to another for the cause of security. From the standpoint of security , it was a nightmare, being in the deluge of humanity, defenseless but he showed no fear. Instead he beamed warmth and delight, his face that of a true ’Holy Father’ coming to embrace his family. 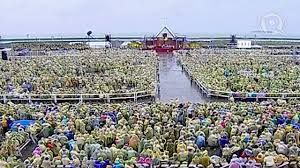 The highlight of this pastoral visit to me was the mass at Tacloban airport conducted in the midst of the driving rain. People had walked far distances just to be there and slept overnight in open spaces drenched to the skin. But all weariness was replaced by joy as soon as the pope took his place for the Holy Mass. Nothing could appear so surreal as the atmosphere for this mass, done on the desolate Tacloban airport tarmac with grey skies blowing with signal No. 2 winds.

Then the message came during the homily, “I came here to tell you that JESUS IS LORD!” shouted Pope Francis above the winds. A simple but powerful message resounded among many hearts that day. People were in tears throughout many parts of the mass, remembering their monumental sufferings and their departed loved ones. Many were still groping for a sensible response to the tragedy of their lives. And here comes the head of the Catholic church declaring to all and the world watching, “JESUS IS LORD!” Does it make any sense at all?

It made sense to me when he raised the Eucharist in the blowing wind, a spectacular image forever etched in my mind and heart. Pope Francis did not promise millions of euros with which to build homes for the homeless or any material approach to the problems of our human lives. But he made us all THINK and FEEL that the presence of the Lord JESUS is not an empty promise but a triumphant one.

A barangay captain from Leyte who survived Yolanda in her reflection at Philippine Conference of the New Evangelization at UST last January 15 exclaimed, “We thought we had lost everything till we stopped to think about what was really left beyond our material possessions and it was our faith in Jesus. Beyond our departed loved ones, our homes, our beautiful forests, farms now all reduced to wastelands, there was Jesus with whom we can carry on with our lives and rebuild.”

Dear friends, the Eucharist is not an empty promise; nor is the mass, nor our heavenly liturgy, nor our celibate priesthood, nor our sacraments and sacred traditions, nor the Word, nor our laity, nor our saints. All are imbued with the Holy Spirit to bring us to salvation, to heaven, to Jesus.

As Pope Francis walked our streets it felt like the Holy Spirit himself was bringing joy and jubilation to all of us. It was a master-class evangelization planned by the Most High which touched us to the deepest levels with all the images, words, tears and even silence of the whole papal visit. This was truly about ‘shouting from the rooftops.’ It was really meant to be remembered, thought of, felt and acted upon. We are called to bring this message of love, proclaiming it, living it until it touches everyone around us, INCLUSIVE to all, most specially the poor, but delivered with mercy and compassion.

Unless people around us see that Jesus lives in us and is proclaimed by us will they have a chance to know him and love him as well for them to claim their own salvation in Him. Jesus is truly LORD!