ADVENT WAKES US FROM OUR STUPOR 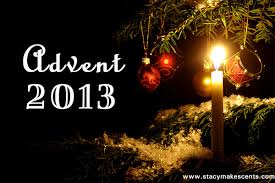 TORONTO, November 29, 2013 (Zenit.org) – This year the liturgical season of Advent begins at sundown on Saturday evening, November 30, 2013. Advent culminates with the birth of the Savior at Christmas. The Advent season in its liturgical observance is devoted to the coming of God at the end of history when Jesus shall reign as king. The time is chiefly a celebration of “the coming of God” in ultimate triumph. Advent confronts us and wakes us from our stupor.

Advent, far from being a penitential time or a time of despair, is a time of rejoicing in hope and a time of patient waiting. Christians are invited to quietly prepare our hearts and our lives for the coming of the ever-greater one in the flesh. For what or for whom are we waiting in life? What virtues or gifts are we praying to receive this year? What material things do we seek? The people, qualities, things we await give us great insights into who we are.

From the CATECHISM OF THE CATHOLIC CHURCH, we read:

II. THE MYSTERIES OF JESUS’ INFANCY AND HIDDEN LIFE

522 The coming of God’s Son to earth is an event of such immensity that God willed to prepare for it over centuries. He makes everything converge on Christ: all the rituals and sacrifices, figures and symbols of the “First Covenant”. He announces him through the mouths of the prophets who succeeded one another in Israel. Moreover, he awakens in the hearts of the pagans a dim expectation of this coming.

523 St. John the Baptist is the Lord’s immediate precursor or forerunner, sent to prepare his way. “Prophet of the Most High”, John surpasses all the prophets, of whom he is the last. He inaugurates the Gospel, already from his mother’s womb welcomes the coming of Christ, and rejoices in being “the friend of the bridegroom”, whom he points out as “the Lamb of God, who takes away the sin of the world”. Going before Jesus “in the spirit and power of Elijah”, John bears witness to Christ in his preaching, by his Baptism of conversion, and through his martyrdom.

524 When the Church celebrates the liturgy of Advent each year, she makes present this ancient expectancy of the Messiah, for by sharing in the long preparation for the Savior’s first coming, the faithful renew their ardent desire for his second coming. By celebrating the precursor’s birth and martyrdom, the Church unites herself to his desire: “He must increase, but I must decrease.”
____________________________________________

Long ago St. Cyril of Jerusalem wrote that almost everything about our Lord Jesus Christ is twofold:

He has two births: one from God before the ages,
the other from the Virgin at the end of all ages.
He has two comings: the one is hidden and resembles the falling of the dew upon a fleece;
the other – the future one – on the contrary will be manifest.
At his first coming, he was wrapped in linens and laid in a manger;
at the second, light shall be his robe.
In the first coming he endured the Cross-, heedless of its shame;
in his second coming he will be in glory surrounded by an army of angels.
Let us therefore not stop at his first coming but look forward to the second.
We hailed him at his first coming with the words,
“Blessed is he who comes in the name of the Lord!”
And we shall hail him in the same way at his second coming.
For we shall go out to meet the Lord and his angels,
and, prostrating ourselves before him, we shall cry,
‘Blessed is he who comes in the name of the Lord.’

Advent teaches us that there are two ways of looking at history: one is sociological and the other is religious. The first, chronos, is essentially unredeemed and cyclic. The second, xairos, is redeemed by God in Christ Jesus and becomes the possibility of providence and sacrament.

You may appreciate part of a homily by Blessed John Henry Newman, the great 19th century English Cardinal and teacher:

They watch for Christ who are sensitive, eager, apprehensive in mind,
who are awake, alive, quick-sighted, zealous in honoring him,
who look for him in all that happens, and who would not be surprised,
who would not be over-agitated or overwhelmed,
if they found that he was coming at once…
This then is to watch: to be detached from what is present,
and to live in what is unseen;
to live in the thought of Christ as he came once,
and as he will come again; to desire his second coming,
from our affectionate and grateful remembrance of his first.

ASK FOR THE GRACE TO READ THE SIGNS OF THE TIMES

WE ARE FAMILY … WE BELONG TO GOD AND TO EACH OTHER