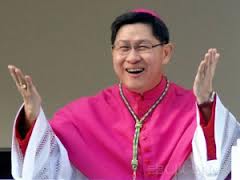 My dear Brothers and Sisters in Christ,

Pope Benedict XV, in his Apostolic Letter Porta Fidei, announced a Year of Faith that will begin on October 11, 2012 and conclude on November 24, 2013, the Solemnity of Christ the King. The whole Church is invited to celebrate the precious gift of faith, to receive it again and to transmit it joyfully. Our beloved Archdiocese of Manila is one with the Church worldwide in welcoming the Year of Faith.

The Rationale for the Year of Faith

The date of the opening of the Year of Faith was chosen carefully. It also partly explains the Pope’s intentions. October 11, 2012 marks the fiftieth anniversary of the opening of the Second Vatican Council (1962) and the twentieth anniversary of the promulgation of the catechism of the Catholic Church (1992). The significance of these two events determines considerably the spirit of the Year of Faith.

In our time, the Second Vatican Council is the great moment of renewal in faith. Blessed John XXIII desired that through the Council “the Church will become greater in spiritual riches and gaining the strength of new energies therefrom, she will look to the future without fear.” The renewal of the Church comes from a rediscovery of its spiritual heritage. By ‘renewal’ Vatican does not mean the emergence of a totally new Church that is cut off from the past. A proper interpretation of the Council does not allow a view of the “post-Vatican II Church” that disparages and “corrects” the “pre-Vatican II Church” by disregarding the Tradition, simplistically exalting what came after the council as good and criticizing what went before it as bad. Neither does a proper hermeneutic of Vatican II allow the reverse that is, judging the “post Vatican II Church” as a deviation from the Apostolic Faith as though the true Church stopped existing after Vatican II. A mere glance at the sources used in the sixteen documents of the Council shows that there exists a profound continuity in the Church, the continuity of faith assured by the Holy Spirit. The Year of Faith invites us to study again the Second Vatican Council and the Catechism of the Catholic Church that is its fruit in order to rediscover the vitality of the faith we have inherited.

Aside from celebrating Vatican II and the Catechism of the Catholic Church, the Year of Faith invites us to look closely at the contemporary world, its beauty and wounds. The continuity of the Church through the ages allows various forms of renewal. The Church receives, celebrates and lives the faith in different historical settings with their unique demands and challenges. Vatican II is one such renewal, engaging the phenomena that make up the modern world. Within the Year of Faith a Synod of Bishops will be convoked to reflect on the New Evangelization. In a span of fifty years after Vatican II, the world has seen dramatic changes that pose new challenges, even threats, to faith and its transmission. The Philippines, specifically the area covered by the Archdiocese of Manila, is not exempt. But we also believe that the contemporary world, especially the youth and the poor, expresses its search for God in ways that the Church must also discover. Thus the Year of Faith invites us to listen to the deep cries and aspirations of the people and societies of our time so that we can proclaim Jesus Christ to them with new methods, new expressions and new fervor. It is a year of listening and mission as well.

The Dynamics of Faith and the Year of Faith

Faith is a dynamic reality. God initiates a relationship with us. God opens the door of faith, to a life of communion with the Father, the Son and the Holy Spirit. This life-long encounter and intimacy with the Triune God happens within the Church. The Church is a community of faith, a fruit and an agent of faith and a missionary of the Gospel in the world.

As we immerse ourselves in the faith of the Church and its mission in our world in this Year of Faith, we are called to engage in an integral development in faith with the following components:

a) A deeper understanding of what we believe in through an intensified Biblical apostolate program, review of documents of Vatican II and teachings emanating from it like the Second Plenary Council of the Philippines and the Second Provincial Council of Manila and the Catechism of the Catholic Church,

b) A renewed appreciation and celebration of the mystery of the faith in sacrament, liturgy and prayer,

c) A joyful living of the faith expressed especially through conversion, a moral life governed by justice and charity, solidarity with and service of the poor, and courageous witness to what we believe in,

d) A rediscovery of ecclesial communion where the diverse gifts of the Holy Spirit are offered and developed to strengthen the Church and serve its mission here and even abroad.

We believe that as Christians we are urged on by the love of Christ to help construct a world of truth, justice, harmony and peace. The Year of Faith also opens for the Church in the Philippines a nine-year preparation for the commemoration of the 500th anniversary of the arrival of the Christian Faith on our shores. With Mary as our model and guide, let us welcome the Year of Faith in the Archdiocese of Manila and trust that it would bear much fruit for the Church and for humanity.

Given on 28 September 2012, Memorial of San Lorenzo Ruiz de Manila and companions.

THE CHURCH: VISIBLE AND INVISIBLE