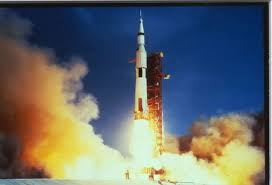 “So then the Lord Jesus, after he spoke to them, was taken up into heaven and took his seat at the right hand of God. But they went forth and preached everywhere, while the Lord worked with them and confirmed the word through accompanying signs.” MK 16:19-20

I recently received an interesting power point presentation from a BCBP brother in Dubai via email. It is a series of photos showing the preparation of the launch of the Space Shuttle “Discovery” in Florida, USA.

The external tank which contains the fuel to propel the shuttle into space is almost as tall as a 15 storey building and as wide as a 3 storey one. That probably contains more fuel than I will ever use in my whole lifetime driving from my home to work. So, you can understand what a fiery spectacle it is to watch the launch of the shuttle even from miles away to see it lift-off from earth through our atmosphere. The effort and resources put into this undertaking are mind-boggling and awesome. It is also worth noting that the ascent takes almost all of that fuel to break through the atmosphere after which it drops the tank and sails effortlessly into space.

At the time of Jesus’ Ascension into heaven, there was no rocket science to speak of. But no doubt, the Ascension boggled the minds and the very being of the apostles as they witnessed the most spectacular happening of their lives.

To me, that exclamation point of an event was a perfect frame for a major message that thrust an explosive force in the history of mankind that brought about the creation of the Catholic Church. This put so much emphasis on the Great Commission (described also in Mark as “the sacred and imperishable proclamation of eternal salvation).

I would often ponder how great a force moved among the apostles and the new believers to bring about the birth of our Mother Church. How did they move from their doubts towards total commitment to the Gospel? What was it surging in their veins and their souls that they worked tirelessly and fearlessly proclaiming the Gospel as far and wide as they could? What force and inspiration blew through St. Paul and other martyrs that they could forget personal safety, comfort and would wholeheartedly trust the Lord and the Spirit’s inner promptings.

In Mark 8:34-9:1, Jesus outlines the conditions of discipleship. It is also still a point of misunderstanding between him and his apostles who still, with the inclusion of Peter, believe he will reign in Jerusalem with worldly, political powers.

However my Liturgical Bible Diary goes further in that event. “Jesus summoned the crowd with his disciples and said to them,’ Whoever wishes to come after me must deny himself, take up his cross and follow me. For whoever wishes to save his life will lose it, but whoever loses his life for my sake and that of the Gospel will save it.’

The diary says, ’Jesus rebuked Peter for his rejection and in today’s portion of the Gospel, described the ascent of the soul to the summit of perfection. To the crowds, he said that whether anyone wants to come after him is a free choice, but once people accept, they must know that God then expects an upward sweep of one’s soul. It’s an invitation- an invitation to the three elements that constitute the essence of being Christian: denying oneself, carrying one’s cross, and following him.

As for denying oneself, some people regret their choices, but few contemplate the wisdom of the observation of the philosopher (Kierkegaard) “that life can only be understood backwards, but it must be lived forwards.” The highest point of our ascent arrives when we take up our crosses, whatever they may be, out of the joy that follows upon love.’

This then I believe is what composed that explosive force that moved through the apostles and the early church, the acceptance of one’s cross out of love. The ascent of the early disciples’ souls towards perfection through acceptance was a force so powerful it brought the Catholic Church to where it is. This imperishable proclamation of eternal salvation is none other than our own witness to the perfect and unconditional love of Jesus for us.

As Bruno Forte says, “The proclamation of the Gospel is not of a doctrine but of the person of Jesus Christ.” However, the proclamation of Jesus and his love will have a hollow feeling within all of us if we have not ascended, that is, denied ourselves, carried our cross and followed him daily.

Nice article Ronnie. Put another way, the essence of being a Christian is to love deeply. To love is to deny oneself because you become other-centered. To love is to carry a cross because loving involves sacrifice. How often do we hear of parents sacrificing their own comforts for the sake of their children. Lastly, to love is to follow the example of Jesus Christ 24 hours by 7 days. Obedience to the will of God must be our overriding desire.