It all happened in God’s perfect timing.

Despite several attempts by BCBP members in the past, starting way back in the early 1990’s, the creation of a BCBP outreach in Canada never really took off. But in 2012, when Bro.Etchin Sumagang, former BCBP Las Pinas Chapter Headand BCBP National Treasurer, arrived in Toronto, events conspired to make everything fall into place. Several members from BCBP Cebu and Mactan Chapters had been meeting informally, and when Bro. Etchin connected with them through Facebook and e-mail, the first steps to formalize the group took hold. 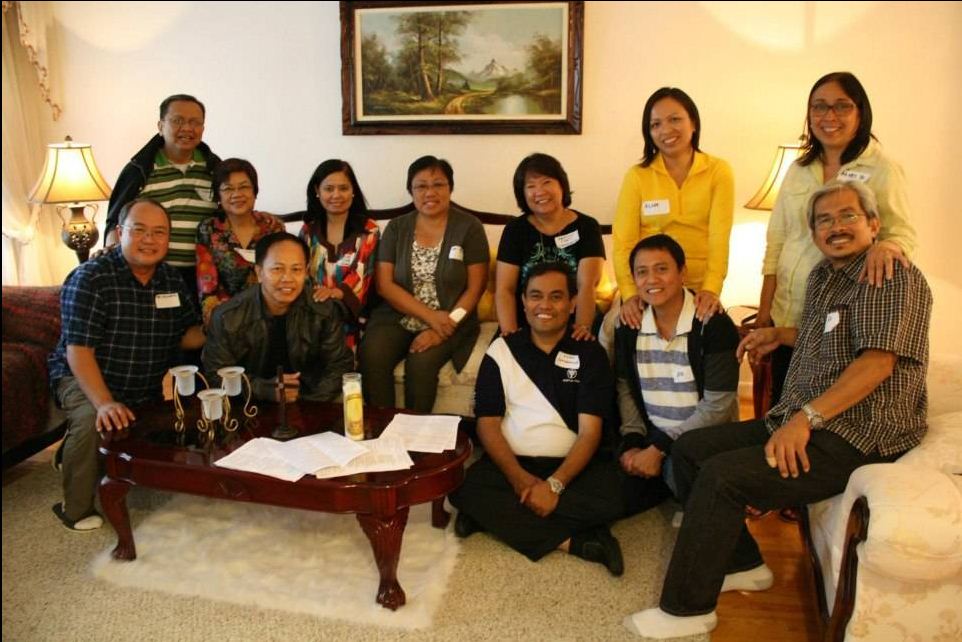 The initial group of 6 couples from various BCBP chapters in the Philippine met on that auspicious day on September 8, 2012 at Bro. Etchin’s house to talk about how to bring together BCBP members in the Greater Toronto Area (GTA). Several more meetings followed, with additional members joining as they planned for the first BCBP Breakfast in Canada.

As news spread by word of mouth and on Facebook, more BCBP members connected with the core group. At the first Breakfast on October 27, 2012, there was an amazing turn-out of 65 BCBP members and 42 first timers. Former BCBP President Louie Morales and his wife Lily were the guest sharers in the jam-packed, standing-room only event at Hilton Garden Inn in Mississauga.

From that first Breakfast came more Saturday breakfasts with an average attendance of 48 members and 21 first timers. The Christian fellowship and sharing clearly filled the hunger of BCBP members who declared that they were finally “back home”, and of their guests with whom they wanted to share this kind of spiritual nourishment.

Several members had not been part of any Charismatic community for many years, and there were some who joined other communities in the years that BCBP was not in Canada. All members attended the Culture Talks in February 2013 to review and be re-acquainted with the BCBP way of life. They then re-committed to the BCBP by signing new commitment cards during the March First Friday mass.

Being true to its evangelization mission, the Outreach conducted its first Brotherhood Christian Life Program in April 2013. All BCBP members attended the sessions as a review. This first program graduated 8 new members. The second BCLP in March 2014 had a bigger batch of 22 graduates.

Members grew in spiritual formation through Faith Fridays (First Friday mass and teaching). The group has already completed the Catholicism series and 40 Days in the Word.The community holds a monthly assembly for praise and worship, and sharing by members. For two years now, there has been a special Praise and Worship celebration for the Feast of Christ the King. Members also attended a Lenten Retreat in 2013.

The first Brotherhood Christian Marriage Retreat was conducted in October 2013, with 23 couples participating, in the beautiful Mount Mary Retreat House in Ancaster, Ontario. It was a memorable and spirit-filled weekend as marriages were renewed and strengthened through the talks and activities.

The members continue to strengthen their personal relationships through social activities such as the Christmas party and Summer Outing. Both events in 2013 and 2014 were well attended by members and their families.

The community has contributed its share to charitable work. In 2013, several members and their children volunteered at a homeless men’s shelter in Toronto to prepare/serve meals and put fresh linens on beds. Members also generously donated in cash and kind for victims of Typhoon Yolanda in the Philippines. As a Christmas outreach, the group sponsored a “Simbang Gabi” for Sts. Peter & Paul Parish Church in Mississauga, serving food and singing Christmas carols to almost 300 mass attendees.

BCBP Canada was approved as a federal not-for-profit corporation in Canada on August 8, 2013.Canada Revenue Agency approved its application as a charitable organization on January 29, 2014. With legal documentation in place, the Outreach could now officially issue tax receipts, and use the license to do mission works in other Canadian provinces.

The Governance Team is currently made up of the following:

Today, there are 7 action groups with 83 active members who meet on a regular basis each month.Action group leaders were recently provided training to help them in their role. In addition, more than 20 BCBP members are attending the BCBP breakfasts but are still serving in other Charismatic communities in the GTA.

The Outreach continues to draw from its internal pool for its Breakfast sharers. A number of members have been invited to share in the BCBP New York and Chicago breakfasts.

For its first anniversary in October 2013, the community was guided by the verse from Deuteronomy 26:10 “Behold I have given you the first fruits of the land”. God had blessed the Outreach on its first year with an outpouring of BCBP members old and new, truly the “first fruits” of BCBP Canada GTA. The anniversary was celebrated with a Breakfast that had no less than BCBP Founder and Spiritual Director Fr. Herb Schneider, SJ as sharer. Several guests from the Philippines and the US came for the celebration. Other anniversary activities included a Mass and a fellowship dinner. The BCBP leaders from Manila also took the time to conduct teachings.

The second anniversary in October 2014 promises to be an even more exciting event.The celebration starts with a Mass celebrated by Fr. Herb Schneider, SJ on Friday October 24, followed by talks from BCBP leaders coming from Manila. Current BCBP President Manny Jimenez and his wife Reggie will be the guest sharers for the Anniversary Breakfast on October 25. The highlight for this year is the elevation of BCBP Canada GTA Outreach to a Chapter. The Governance team will also be formally installed during the ceremony after Breakfast.The day ends with a fellowship dinner.

The whole community looks back with gratitude over God’s immense blessings in the past two years, and is reminded of its evangelistic mission to spread the good news in the marketplace. As the theme for this year’s anniversary says “I have prepared the land and nourished it with water that will never run dry. Go now, bear much fruit so that my name is glorified! I will be with you, that is my promise.” (Isaiah 58:11, John 15:1-8). With the guidance and help of the Holy Spirit, the members will continue to work hard to grow the community not just in the Greater Toronto Area but in the entire expanse of Canada.

Hi, good day I used to be a member of Makati chapter many years ago but I am now here in NYC. I want to know if you are active here and have chapter too. I want to be active again with my wife. Many thanks.

Thank you and God bless!

Now in Whitby Canada. We are from Davao city. Staying till July 27, 2016. We talked with Eric Cordeta after NAC. WE ARE READY TO SHARE IF NEEDED. Thanks and God Bless.

Hi Caloy. You can connect with Ricky on Facebook or thorough the FB page of BCBP Canada GTA.

good afternoon – my name is caloy brosas. i reside in vancouver b.c. i would like to find out if i could correspond with ricky nuguid please. if my lapsing memory serves me right,he was a former office mate (co-instructor) of mine either at special services corporation or at filipinas life (subsidiaries of the ayala group of companies). this was during the period 1971 -74.maraming salamat po!

WOW! Such a remarkable growth.

May our dearest Lord fill your entire chapter all up by Himself – with Himself, always.