Keeping up with its mantra of Changing the Face of Business, by Bringing Christ into the Marketplace and Winning the Marketplace for Christ, the Brotherhood of Christian Businessmen and Professionals (BCBP) realizes it can only do so if Corruption, one of the greatest ills of our society and considered as one of the root causes of all other social injustices, can be abated if not completely eradicated. 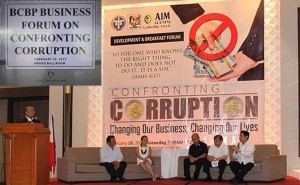 And so last February 28, under the auspices of the BCBP National Committee, with the cooperation of The Asian Institute of Management (AIM) Alumni Association, BCBP Cebu held a Development and Breakfast Forum with the theme Confronting Corruption: Changing Our Business, Changing Our Lives. The event held at the Grand Convention Center, Cebu City was very successful with a sell-out crowd estimated to be far above 500, not only by members of all the BCBP Cebu chapters and outreaches but by dignitaries from the Cebu business community as well as from the local government units. It was the second event of its kind for BCBP, the first one was held in Manila last August 16, 2014.

Everyone not only received their fill of the sumptuous breakfast but received doses of very enlightening and thought-provoking corruption related topics delivered by distinguished guest speakers who themselves are prime movers in the fight against corruption.

The first speaker, Prof. Ron Mendoza, Executive Director of AIM Policy Center, in his topic Good Governance is Good Economics, gave light on the level and gravity of corruption. He detailed when and where does it thrive, the scourge plaguing the country dating as far back as 20 decades ago, committed by the highest, most powerful and influential personalities of the land, down to the lowest barangay resident with civil authority positions.

Manila Hotel President Joey Lina, former DILG Secretary, former Senator and former Laguna Governor, in his topic Don’t Be Just Against Corruption: Support Reforms narrated how he, by doing God’s will, performed his duties honestly and transparently as can be despite the so many temptations and coercions to commit otherwise. The articulate Sagot Kita movement leader further urged everyone present not just to be passively against corruption but to passionately join any and all reforms and movements to curb it, citing that as Christians it is our moral obligation.

Last but not the least of the speakers was Atty. Alex Lacson, President of Solidarity for Transformation Phils. and author of the best selling book titled: “12 Little Things Every Filipino Can Do to Help Our Country”. In his topic Building Bridges of Hope Amid Corruption, he cited various suggested course of actions and guidelines, as well as anti-corruption reform movements and cause-oriented groups for anyone who is impassioned to actively join the crusade against the evil forces of corruption.

Panel discussions followed right after the talks with the three speakers joined by BCBP National President Joey Avellana and Ms. Ma. Teresa Chan, Cebu Chamber of Commerce and Industry (CCCI) President, as panelists. A number of questions were posed by the attendees and were well answered by the panelists. Ms. Chan also gave her comments and reactions, and in behalf of the Cebu Business Community committed to include the fight against corruption not only for honesty and integrity in the private sector, but in the government as well, as one of their forthcoming advocacies. Former CCCI President Ben Dapat also gave his comments, reactions and posed some questions to the speakers. Mr. Virgilio Espeleta, CEO and founder of FAMCOR, a pioneer firm specializing in family business consulting, delivered messages of thanks. He is also a member of a large religious community in Cebu, the Bukas Loob sa Diyos (BLD) Covenant Community.

For sure the attendees went about their respective ways well informed, impassioned and emboldened to take active participation in fighting corruption. KURAKOTS BEWARE!

WHAT IS YOUR RATE PER HOUR?