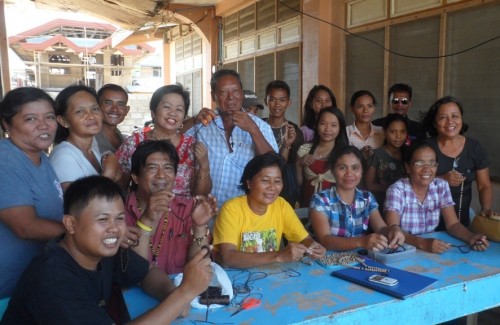 The coconut trees uprooted by typhoon Pablo are now the raw material used for making rosaries in the Cateel livelihood project. BCBP Davao East has adopted and continues to support this livelihood project. The Davao Oriental IPID News filed this report.

This training on rosary-making is one of the initiatives launched by the Building Back Better (BBB) Movement under the Office of Governor Corazon N. Malanyaon and the Brotherhood of Christian Businessmen and Professionals (BCBP) Davao East Chapter. Scope of this scheme is the Livelihood Program intended to assist victims of the typhoon recuperate from the damages caused by said typhoon in their livelihood. 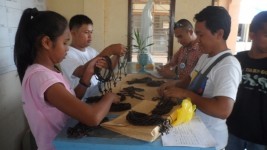 This activity is being supported by the Brotherhood of Christian Businessmen and Professionals (BCBP), Feed the Hungry (FiT) – USA, Department of Trade and Industry (DTI) and Philippine Coconut Authority (PCA).

All in all, there are now more than 300 parishioners’ families here that were trained for the craft who are members of the St. James de Apostle Beads Handicraft Association which is targeting to complete at least 50,000 rosaries which have been set to be exported in other countries.

The Philippine Coconut Authority (PCA) provided machineries for the said training. However, the association hopes that they will be provided with their own equipment in making beads.

This training was attended by Marciano Tapiador, Jr., in-charge of the BBB Movement and PSD of the BCBP Davao East Chapter; Ma. Belinda Ambi, DTI Provincial Director, Jose Endona of DTI, Engr. Rose Villaruel, Julito Librado and Rolando Edquila of the PCA. (Sarx Lanos/IPID News)
————–
In a recent email, Bro Joseph Tapiador, BCBP Davao East, reports: “We expect to have a total rosaries of 18,000 by today (July 14) for your information. The Assissi Foundation will be shown samples of our product on 18 July 2013 and we pray to Mama Mary they will help us by buying our rosaries for their missions in China. 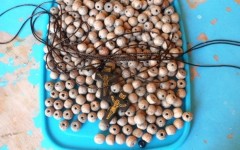 Also, our beneficiaries started production of coconut beads this week. So far 2,000 is initially produced. We requested DTI for product improvement because the coco beads is quite rough. Philippine Coconut Authority will train and give them the band saw needed for coco bead production.”

BEING A CHRISTIAN SERVANT IN THE BCBP

Where can we buy the rosaries?

it was the BCBP who initiated the livelihood program to the parish of St. James, Cateel, Davao Oriental. No politician was present during the orientation and BBBM of the province was not mentioned nor involved. This is to make clear the news item of Sarx Lanos. The DTI came to help after the parish organized the group.

May we request the MANCOM and all our Marian Brothers to support this rosary making to give a sustainable livelihood to the people of Cateel and in the future, those in Baganga and Boston, thereby giving HOPE for their future especially the children!

Brothers,
How much do you sell these rosaries?

We are asking the help of the entire BCBP community to help us market the rosaries so as to sustain the project and help the families whose coconut farms where destroyed by typhoon Pablo. To all our brothers and sisters who one way or the other helped us by sharing their resources to typhoon victims, our heartfelt thanks.If you are interested to buy rosaries from us kindly e mail us so that we can send it.