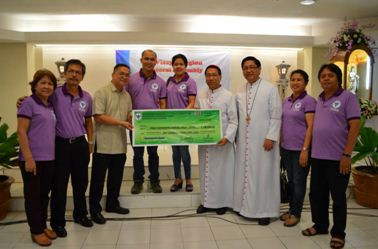 The Brotherhood of Christian Businessmen and Professionals (BCBP) Dumaguete South Chapter finally turned over the check donation amounting to One Hundred Thousand Pesos (P100,000) to the Roman Catholic Archdiocese of Palo through Most Rev. John F. Du, D.D., Archbishop of Palo, Leyte during the 9th Visayas Regional Parish Conference held in Dumaguete City last October 14-16, 2014. Said amount was donated to help in the restoration of the churches under the archdiocese of Palo, badly affected by super typhoon Yolanda.

The Archdiocese of Palo has been chosen as one of the two beneficiaries of the “Praise & Worship Concert for a Cause” project of the BCBP Dumaguete South Chapter, held last January 11, 2014 at the Lamberto Macias Sports Complex, Dumaguete City. This noble project aimed to raise funds to help victims of the Super Typhoon Yolanda.

The other beneficiary of the said concert is Brgy. Calambua, San Remigio, Northern Cebu, (also one of the most affected areas of the super typhoon), receiving Two Hundred Thousand Pesos (P200,000) for the construction of a one-classroom school building for Calambua Integrated School. A group of BCBP Dumaguete South Chapter members travelled for long hours to get to this barangay to formally turn-over their P200K donation and attend the ground breaking ceremony last June 1, 2014, which was also attended by some of their barangay officials and the school principal and some faculty members. 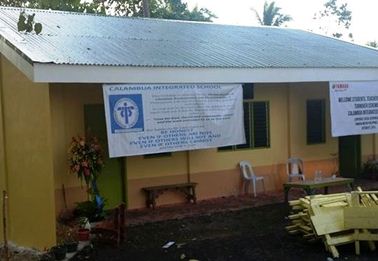 It was on the last week of September 2014 that the school building was completed and is ready for use, also because of the help of some like-minded people who donated additional amounts for the project to be finished.

Members of the BCBP Dumaguete South Chapter are now very happy that we have finally implemented the fruits of our Praise and Worship Concert for a Cause thereby accomplishing our mission of helping our less fortunate brothers and sisters, like the typhoon victims, using our Time, Talents and Treasures. To GOD be the GLORY!