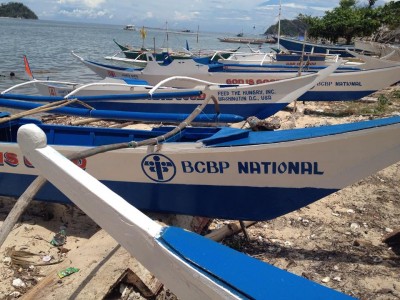 On June 16, 2014, at Isla Gigante Norte, at the farthest barangay of the coastal town of Carles in Iloilo, this was what 26 grateful and jubilant fishermen and their families – together with members of BCBP, the folks of Barangay Asluman, and Iloilo’s Vice Governor as special guest – celebrated. This was the appointed time – the launching of the fishing boats that the fishermen fashioned with their hands from the materials that they received free thru the efforts of BCBP’s Iloilo Chapter. That they may fish again. To live life more fully.

The day started with a Holy Mass, celebrated by a priest-member of the Estancia Outreach. A short program followed, with each beneficiary receiving a deed of donation for his assigned boat and a “survival” kit in a backpack or BCBP Iloilo loot bag. The boodle fight ensued, which featured bounties from the sea such as scallops, blue crabs and other exotic shellfish that the mainlanders (meaning BCBP members and guests) feasted on; and pork and chicken dishes which the fisherfolks favored! Lunch done, the boats were finally blessed and launched to sea to the delight of all!

For sure, the scene will forever be etched in the minds of many who were privileged to be there: Fishing boats in BCBP blue and white, criss-crossing that expanse of the Visayan Sea facing Isla G, some racing with each other like child play. Kids, children of the beneficiaries, frolicking in the boats , jumping into and out of their infinity pool that the sea was to them. Excited members of BCBP Iloilo, Roxas, and Estancia, and even the Vice Governor on board the boats, thrilled by the rare joy ride with the fresh sea wind to their faces, perusing the mysterious islands nearby and the clear water underneath. It was a unique playground. It was God’s playground. An experience both exhilirating and awe-inspiring. 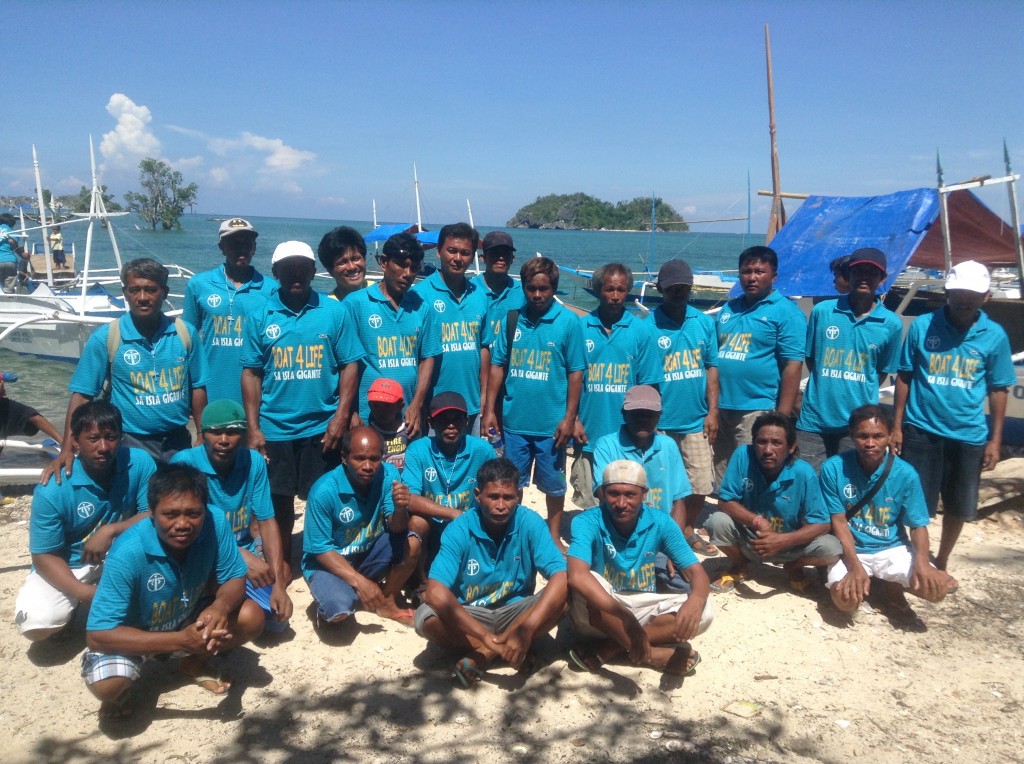 And the thought no doubt crossed many a mind: “God is Good!” These were emblazoned on both sides of all the boats – a reminder that “all things work out for good for those who love God”; an assurance of His providence; an expression of truly grateful hearts; and an acknowledgment of God ever-present in our lives!

“June 16, 2014” actually started nearly seven months earlier. A few days after Yolanda struck, a group from the Iloilo Chapter motored to Estancia to seek BCBP members there, to bring some emergency help, to get first-hand a sense of the havoc the typhoon wrought. And to pray.

After the initial flurry of intense emergency relief activities, plans expanded to more enduring, life restoring-efforts towards the end of 2013. This was when the call for fishing boats started to be sounded, especially for the hard-hit coastal areas. The following January, visits to the Provincial Capitol yielded details on and bared the reason for Iloilo’s “Adopt a Fisherman” scheme: More than 9,000 boats lost or damaged by the storm in 8 of Iloilo’s coastal towns alone, towns that bore the brunt of Yolanda as it made landfall in Panay.

It was at this time too that BCBP President Manny Jimenez thoughtfully included us in the loop in communications with FEED the HUNGRY (FtH), a Washington D.C.-based NGO of Filipinos in the US, seeking to make a difference, especially in the lives of those who suffered from the storm. Ms Percy Solis, Project Director of the Calamity Assistance and Relief Efforts (CARE) of FtH, with her husband, Pepito, and Ms Tess Alarcon, directors also of FtH, then came to visit Iloilo in early February and were briefed on the project concepts. It was while communicating with them that the idea was dubbed BOAT4Life – underlying the pathway to restoring life for our fisherfolks. 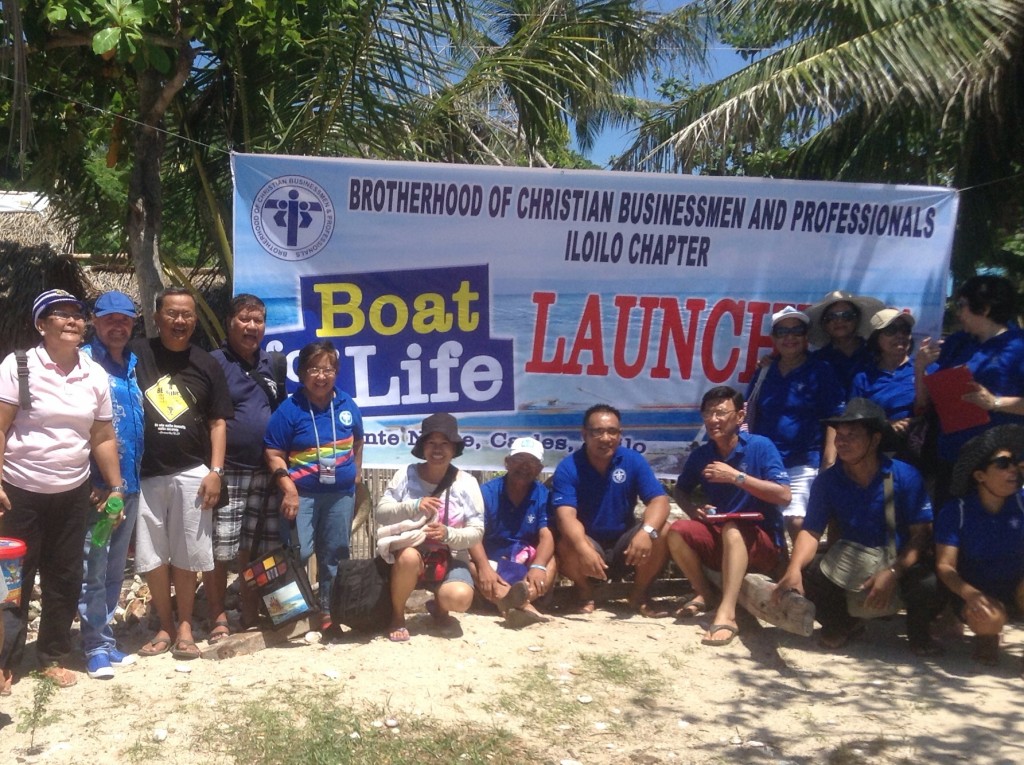 Following this the Iloilo Chapter set itself on the enterprise and on March 19 sent its “marines” led by the project chair, Maj Crossbee Gumowang, to Isla G to preliminary seek and identify probable beneficiaries, guided by Estancia OH Romy Nallos and wife. With a list of prospects in hand and after a validation process, BCBP Iloilo thru its CH, Bob Sy, emailed its appeal for support to FtH; and sought a counterpart grant from BCBP thru President Manny Jimenez. It also formally enlisted the help of the Estancia Outreach.

Soon as commitments for funds were sealed, a social contract with each of the designated beneficiaries was signed; all agreeing to provide sweat equity and shoulder other costs as their share, and committing as well to responsible fishing.

Thus the partnerships were sealed. The FtH pledged to sponsor 10 boats; the BCBP thru President Manny a similar number; and the Iloilo Chapter another 10, with support from members . However, two of the candidates did not meet requirements, and two more backed out, leaving just 26.

The model for the boats was originally the typical design from the provincial government : 16 footer with a 7 HP gas engine. Upon appeal by the fishermen it was agreed to upgrade to up to 20-footer hulls with 12 HP diesel engines, costing more than twice the smaller gas engines but more economical to operate and maintain, more reliable, and safer. Thus the final cost exceeded the original budget, but was deemed well worth it.

During the soft launch of some of the boats last May 31, attended by the Governor and Vice Governor of Iloilo, and the Mayor and Vice Mayor of Carles, and numerous other provincial and LGU officials, the boats that were test run elicited highly favorable comments from the government executives and officials, as they compared the “BCBP” boats with those previously turned over in other towns.

From the start, the mindset was that BOAT4Life was not a one-shot deal. More than that, it would be an opportunity for evangelization and advocacies. It would be transformative and empowering.

In the gatherings with the beneficiaries, prayers were a regular feature. Later on, some of the fishermen already led in prayer. The rationale for “God is Good” hand-painted on the boats was duly explained. Our Be Honest campaign was given time, as with the environment. The fishermen and their spouses were organized into an association to give them voice and as a forum for exchange of ideas. The day before the launch, there were roundtable talks on sustainable fishing and even boat maintenance. Experts brought in conducted trainings on first aid, CPR, rescues in the waters, and related topics.

Other ideas are percolating. Small group faith sharing sessions. Medical missions. A common fund for boat maintenance. A few more boats with the 26 beneficiaries looking to sponsor one for a fisherman-victim yet to get a boat. And so the launch, while connoting completion, is also a beginning. Of a journey where BCBP Iloilo prays it can continue to fulfill its mission.

It will be quite a challenge as every sortie will entail, as it had, a land trip from Iloilo to Estancia of about 2.5 hrs and a boat trip from there to Isla G for another 2.5 hrs. So far the BOAT4Life team has been to the Island 6 times. Each time, the sea was calm!

What has made BOAT4Life work? Easily the relationships forged or strengthened. With the fishermen. With FEED the HUNGRY, INC. With the national officers and Estancia Outreach of BCBP. With the government officials and the offices they represent. With God above all.

Reflecting on the past months, especially on the launch, Psalm 126 fits: “The Lord has done great things for us. We are happy indeed!”

HEAD, SHOULDERS, KNEES, TOES — 4 WAYS TO PRAY FOR YOUR CHILDREN

POLITICS AND MORALITY: HOW CAN THEY GO TOGETHER?

Praise God! What a beautiful article! Truly, “there are in the end three things that last: faith, hope, and love, and the greatest of these is love.” (1Cor. 13: 13) Congratulations and God bless BCBP Iloilo, Roxas, and Estancia!