BEWARE SECULAR MESSIANISM, AN ANTI-ADVENT OF THE ANTI-CHRIST 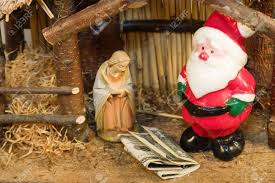 WASHINGTON, D.C., December 16, 2014 (Zenit.org) – The season of Advent is filled with emotions of expectation, longing and anticipation, however these emotions are not only present for four weeks in December, they are a basic ingredient of the human imagination.

We are always looking for what’s next. We are constantly waiting for the answer to our problems and the coming of the one who will save us and our society. This longing for a Messiah and expectation for a better world is part of being human and being locked into time and space. We are driven by desire for something better. When that desire is for Christ and his kingdom we are motivated to grow spiritually and as citizens of heaven look for that better country.

However, when the desire for a better world becomes focused completely on this world a dangerous shift occurs within the Christian religion. We are called to work for peace, justice and equality in this world, but we are also called to more than that. A major problem in the Church today is when Christians exchange the Divine and supernatural economy of redemption for an attempt to do no more than change the world.

Many Catholics have forgotten that the Church is established for the forgiveness of sins and the proclamation of the Gospel, and believe instead that the Church is here to simply make the world a better place, and that this needs to be accomplished by all sorts of educational, social welfare, political and even revolutionary activities.

This seductive message is the message of anti-Christ. In a telling passage the Catechism quotes Pius XI’s encyclical Divini Redemptoris, “The Antichrist’s deception already begins to take shape in the world every time the claim is made to realize within history that messianic hope which can only be realized beyond history through the eschatological judgment. The Church has rejected even modified forms of this falsification of the kingdom to come under the name of millenarianism, especially the intrinsically perverse political form of a secular messianism.” para. 676

In other words, whenever you see a system like socialism or Marxism or capitalism attempt to bring in a utopian new world order, it’s the spirit of anti-Christ, and be assured the Catholic Church will be it’s Public Enemy Number One. Whenever you see a church or pastor or bishop more involved in social reform, political renewal or plans to change the social order (no matter how well intentioned) you see an apostate. Whenever you see the secular press, the media manipulated masses and the celebrity stars idolize a new political hero who is going to save the world–be alert and watchful.

The campaign to change the world is the message of anti-Christ not because it is totally wrong but because it is not totally right. Like all heresies it is a half truth.

If this is the message of anti-Christ it is also therefore a kind of “anti-Advent.” True Advent sparks within us a longing for Christ’s kingdom. Anti-Advent sparks the desire to bring about an ideal world here and now. In the catechism we learn that this is a harbinger of the second coming, “Before Christ’s second coming the Church must pass through a final trial that will shake the faith of many believers. The persecution will unveil the mystery of iniquity in the form of a religious deception offering men an apparent solution to their problems at the price of apostasy from the truth. The supreme religious deception is threat of the Antichrist, a pseudo messianism by which man glorifies himself in the place of God.” (para. 675)

DOES IT REALLY MATTER WHERE CHRIST WAS BORN?