Bishops call on faithful to be ‘involved’ in politics

Filipinos who belong to the Roman Catholic faith should not just be onlookers but should be involved in politics to bring about real human and spiritual good to society.

This in a nutshell was the message of Archbishop Romulo Valles, president of the Catholic Bishops Conference of the Philippines (CBCP) as he urged Filipinos to have their voices be heard in relation to the coming May elections. 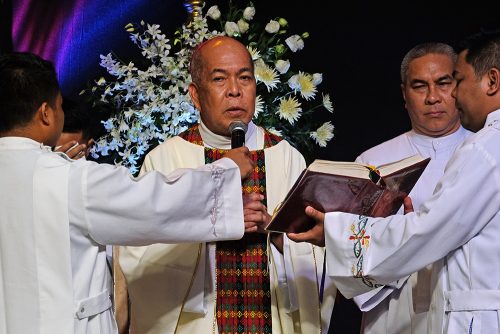 January 28. The letter is as follows…

Every election period is a promise of better times or a foreboding of what is worse to come. The choice is in our hands. It is as if God is telling us “I have set before you life and death, the blessing and the curse. Choose life, then, that you and your descendants may live.” (Deut 30:19).

The year 2019 is not just an ordinary election year. The midterm election on May 13 is in itself already crucial. In our country today the checks and balances in the government are being undermined. So far the Senate is the institution in the government that is holding out as our country is inching towards total control. It is very crucial therefore that we elect public officials who are principled, courageous and who have the common good as their main concern and not their own political interests. We encourage voters to be very discerning in their votes. Let the lay groups engage in discernment circles to help one another know the candidates well and choose the candidates with the common good of the whole country in mind and not according to what the candidates promise, much less according to what voters have received from these candidates. Participation in politics for Christian lay people is not just to be limited to non-partisan involvement. Christians are also encouraged to engage in principled partisan politics. This means that they

can campaign for good candidates as an exercise of their Christian faith.

However, more than the elections, another serious, and perhaps more insidious, matter that we should pay attention to is the threat the version of constitutional change and federalism approved by the Lower House and now being dangled to the senators. It takes away the term limits of most of the elected officials and allows political dynasties to continue. It opens the national resources to foreign ownership and eventual control. Its version of federalism is vague and it will do away with the 2019 elections.

We denounce any attempt to avoid the 2019 elections. This right of the people to vote should not be shelved. We reiterate what we have taught before: “If the Constitution is to be revised at all, the process should lead to a greater defense and promotion of the moral values of human dignity and human rights, integrity and truth, participation and solidarity, and the common good.” (CBCP PASTORAL GUIDELINES FOR DISCERNING THE MORAL DIMENSION OF THE PRESENT-DAY MOVES FOR CHARTER CHANGE issued on January 29, 2018) We do not see the proposed revised constitution approved by the Lower House as an improvement of the 1987 constitution but is a self-serving attempt of present politicians to remain in power. We stand by what we have stated in the aforementioned letter: “As servant leaders, we have listened to many others who believe that the solution to our problems is not a revision of the Constitution, but a full implementation of the 1987 Constitution (e.g., on political dynasties & on freedom of information), and a revision of the Local Government Code, originally designed to devolve power from central authority.”

Our dear People of God, we are in a crucial moment of our history. In our hands is the direction of our country. Let us be vigilant in what is happening. Let us not just be on-lookers but let us be involved. Pope Benedict said: “A big part of the vocation of Christian lay people is their participation in politics in order to bring justice, honesty and defense of true and authentic values, and to contribute to the real human and spiritual good of society. The role of the laity in the temporal order, and especially in politics, is key for the evangelization of society.” (Pope Benedict XVI on receiving the Bishops of Paraguay in September 2008) Pope Francis taught: “‘A good Catholic doesn’t meddle in politics.’ That’s not true. That is not a good path. A good Catholic meddles in politics, offering the best of himself, so that those who govern can govern…. None of us can say, ‘I have nothing to do with this, how they govern.’ … No, no, I am responsible for their governance, and I have to do the best so that they govern well, and I have to do my best by participating in politics according to my ability.” (Pope Francis September 16, 2013) Furthermore, we heed the appeal of Pope Francis in his message on the World Day of Prayer for Peace of this year that good politics is at the service of peace.

No one can say in this age of the social media that she/he cannot participate in politics. Each of us can let our voice be heard and be a part of national conversation by posting our views in the social media, but with great respect for others and with the end of advancing the truth. We especially encourage the youth whose future is very much at stake to participate in the electoral process especially by using their skills and knowledge of the social media to advance what is true, what is just, and what is for the common good.

For the Catholic Bishops’ Conference of the Philippines,