—————————
In his talk at NAC35, May 1, BOT Chair Roy Calleja in his synthesis of the three mini sharings exhorted everyone to move out for God. He said, “We need courage, bravery, boldness. We also need to do the following: Acknowledge, Admit, and Announce.” For each of these three points, he presented examples from the BCBP Way of Life.
——————————-

To move out for God, we need courage, bravery, boldness. We also need to do the following: Acknowledge, Admit, and Announce.

1. First Acknowledge that we are a Christians. 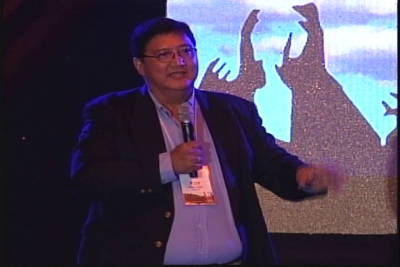 I have a brother in the QC Chapter whom I respect a lot. I was President of a company with receivables from the National Power Corporation. When I and the owner of my company went to NPC to collect, guess whom I saw in their big office, our brother Luis Ferrer. I greeted Luis then met with the 2 persons assigned to our case. After the meeting, they talked to me and asked me why I knew Luis. I told them “kasama ko siya sa BCBP. They told me “bilib kami diyan tahimik lang pero yung malalaking projects at malaking kaso siya may hawak. Walang iskandalo, ayos ang paghawak niya. Sabi ko si Luis, anak ng diyos yan”. I have never been prouder of being a BCBP member.

Brothers, the power of our transformed lives is the best witness for God, our brothers Maning Lorenzo and Didi Perez by their lives attracted a lot of brothers to be members of Legaspi and Tuguegarao.

Even in the BCBP, if we see a friend in the past become a BCBP member, our faith and courage is strengthened. In Davao during the NAC 30 celebrations, two friends Ricky Aragon and Bobby Cabrera met. I was seated in the gym waiting for the worship to start with Ricky and the other members of QC Chapter. Bobby passed by, saw Ricky and said, “Ricky, ano ginagawa mo ditto?” I told Bobby, “BCBP member yan.” Bobby said something like, “wow, BCBP ka na!” Then I told Bobby, “Chapter Head namin yan sa QC.” And Bobby was in awe, “Chapter Head Ka?” Our transformed lives are the best witnesses of God and his love. If we do not acknowledge we are Christians, we do the opposite. We conceal God.

2. The second is to Admit Our Fears.

A brother just recently installed as Chapter Head told us of his fears in accepting the position. Alan Soriano, CH of Molo, was installed last January and he shared this beautiful story. 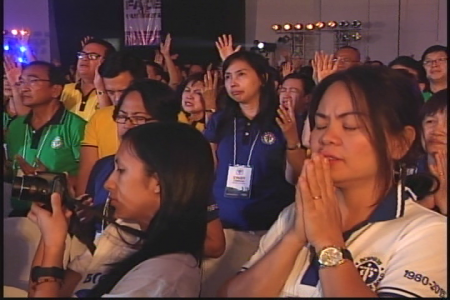 There was a rich, powerful kingdom who had one problem, the only child, a daughter was unmarried and had no suitors. The King and his advisers thought of a contest to get a husband for his daughter and the contest was announced to all eligible bachelors in the Kingdom. On the day of the contest, a lot of bachelors showed up. The king announced the prize: the winner will choose between US$10 M or 10 hectares of prime commercial land in the Kingdom or his daughter’s hand in marriage meaning the winner will be king in the future (loaded yung Prize). The contest involved the fastest one to cross a river filled with all dangerous animals: poisonous snakes, anaconda, crocodiles, hippopotamus, sharks, even credit card collectors.

The contest started and all jumped to the river but the others stopped in fear, they were eaten by the animals and the rest turned back. Only a young handsome man was so fast he made it to the other side. So the King approached the winner and asked him to choose a prize. Do you choose the US$ 10 M, the young man said “hindi po, kahon.” The king smiled and asked again, do you choose the 10 hectares of prime commercial land and the young man said, “hindi rin po, kahon.”

And the King was so happy and asked the man calling him ‘hijo,’ “then you choose my daughter and you will be king someday worth more than 100 times the 2 prizes ‘ and the young man said,” hindi pa rin po, kahon.” The King did not know what to do. He asked the young man “ano ba talaga ang gusto mo.” The young man said “GUSTO KO LANG MALAMAN KUNG SINO TUMULAK SAKIN.”

Brothers and sisters, a lot of times we are focused on the things that instill fear in us, on the obstacles, on the problems, we become glum, negative, masungit and this affects our other brothers and sisters. But if we have big things to fear, remember we have a far more bigger God. We must focus on Jesus not on our fears. A beautiful acronym of fear is FACE EVERYTHING AND RESPOND. Can you repeat this with me – FACE EVERYTHING AND RESPOND.

But the biggest fear we have is trusting God. Most of the time when we serve God, we try push our own agenda, our own plans, ideas, our own attachments. And we try to convince God to our side.

I remember a story of a politician who invited friends to a party in his house. In the middle of the celebration, a guest stood up and shot another guest. The owner of the house hid under the table then ran to his house and pushed the door open but the door was locked. He pushed and pushed but after a couple of minutes he realized all he needed was to pull the door and it opened.

3. The third is to Announce Jesus’ love to others.

I see we have brothers and sisters from Calbayog here. This is the story of how our brothers from Cebu announced Jesus’ love to you by showing their love for you. The mission team from Cebu met several obstacles that forced the cancellation of the 2 breakfast dry runs, the first because of a shooting in Calbayog, the second because of a strike in the pier, then during the successful dry run, the vehicle they rented suffered a malfunction. 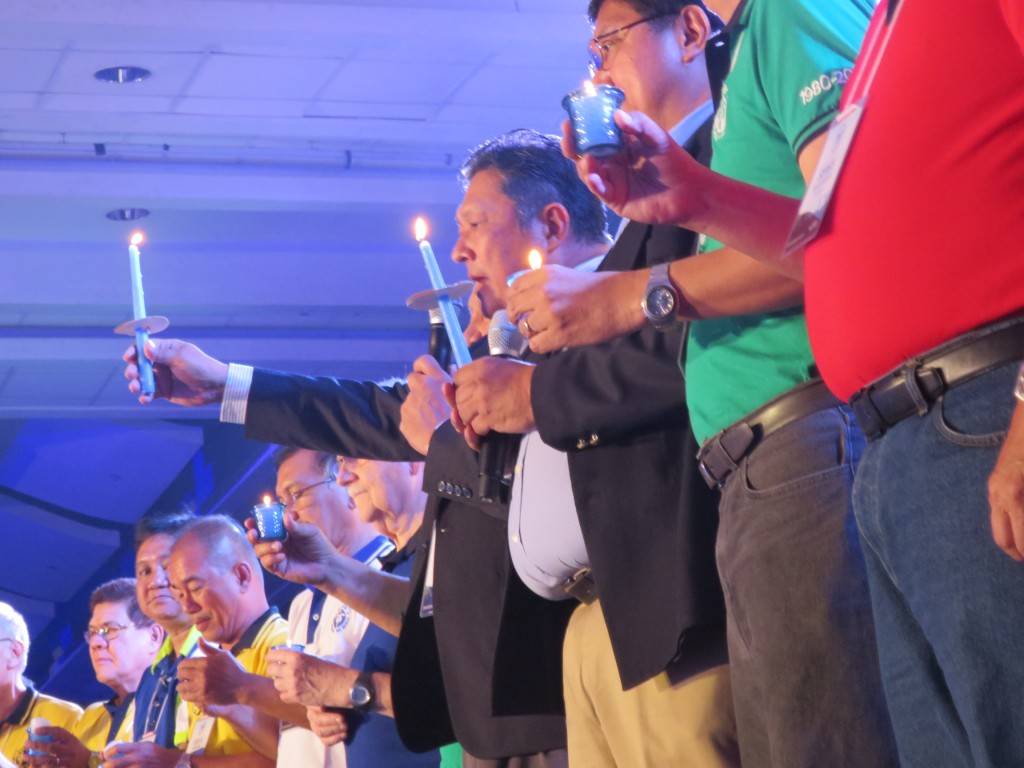 After the breakfast on March 20, 1999, Bishop Palma was so happy he invited the mission team to sing in the mass for the graduating cadets of the high school students of a catholic school. As they prepared for the mass a member of the mission team suffered a mild heart attack. Two team members looked for a doctor at the provincial hospital but none was available. They then looked for a botica and when they passed by one 5 miracles happened: they found out the owner was first a doctor and a cardiologist and the doctor knew Rene personally, he did not charge a fee and became a breakfaster. Going home to Cebu, Boy Villanueva and a brother rode a trisicad to the pier but it hit a pothole, skidded and turned turtle with Boy being thrown out and the other pinned down by the vehicle. But with God’s protection, they suffered only minor injuries. Bishop Palma after learning of the accidents immediately blessed the whole mission team and prayed the rosary with them.

Brothers and sisters, Announce not only Jesus’ love to businessmen and professionals but stand up for justice, for the values espoused by Jesus in the Gospels. I used to be consultant of a company where its President was engaged in conflicts of interest. Worse, she would even get the company petty cash on a Saturday to use it in her lending investor business. I talked to the Owner showing to him the proofs but his reaction stunned me. He suspected me of just spreading lies. Then he scheduled a confrontation after several days.

The night before the confrontation, I decided that since the Owner did not even want to protect his company, why should I. I decided would not attend the confrontation. Then I woke up at about 2 in the morning and since I could not sleep, I opened the TV. The movie, Desperate Hours, was about a criminal played by Micky Rourke who escaped from prison to get back at the judge who put him in jail played by Anthony Hopkins. The FBI got wind of it and assaulted the house of the judge. The judge and the criminal grappled for 2 guns and the judge got the gun with bullets while the criminal got the gun without bullets and pointed the gun at the wife of the judge who was panicking. The judge told the wife “if before you did not trust me, trust me now, trust me now.”

Then I realized the reason I woke up was that God wanted to talk to me to tell me not to be afraid, to attend the confrontation and tell the truth. I did so the following morning and presented evidence and God’s justice prevailed.

So Announce Jesus’ love, Announce His values, don’t stop no matter what.

Good afternoon Editor in Chief! I would like to suggest if you can come up with an article on the terminology of the BCBP to ensure that our new members are familiarize with our terms. For example, BOT, Mancom, Outreaches, Chapters, AGLs, Governance, AGMs, CAs, and more. If these terms are accompanied by a definition, the better. Thank you and God bless us all! More power to BCBP Kapatiran.