BREAKING BREAD WITH FAMILY AND FRIENDS – NOT BY BREAD ALONE, BUT…

BREAKING BREAD WITH FAMILY AND FRIENDS —
NOT BY BREAD ALONE, BUT…

The month of April has been very interesting for me. For starters, we went on a family vacation, all seven of us. That doesn’t seem surprising enough, but if one considers that four of our children have jobs, and the fifth has just finished her schooling, one might be able to appreciate what a scheduling nightmare we had to overcome to be able to hie off somewhere for 15 whole days. Fifteen days means well over two hundred waking hours spent together, not to mention forty five shared meals – something we haven’t had in a long, long while. In addition, we were staying in the home of my best friend from college and her two sons. The seven of us took over their home – especially their kitchen – forming teams to stage a cook-off where the three of them were the judges. That was one of the best things about this trip, how the ten of us huddled together around my friend’s small dining table, feeding on food and laughter and very, very warm feelings. 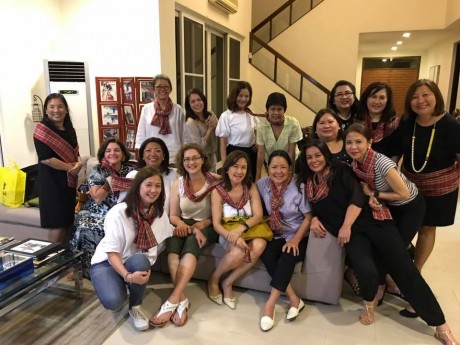 When we got back, I had a high school reunion, as classmates from overseas were in Manila for a visit. That meant dinner, a bring-your-best-dish potluck which needed my every ounce of self-control, wishing all along that I had brought a spare tummy! From start to finish, there were simultaneous conversations ranging from the banal to the profound, from the hilarious to the tear-jerking varieties. Photo albums from way-back-when were passed around, and between horsing around like the adolescents we used to be, we made plans for our upcoming jubilee celebrations. Among friends from when we were teen-aged, it seemed we have never spent a day apart!

Closely following that was a family reunion of relatives on my father’s side, the first in about a dozen years. We haven’t celebrated our traditional Christmas get-togethers after most of my father’s siblings, as well as he, have passed on. Perhaps it was too sad; perhaps we were too busy, perhaps no cousin (and I have fifty-four in the first degree!) wanted to brave the logistics. Yet there we were one fine Sunday, queued up in Tagaytay traffic on the way to a sumptuous lunch peppered with embraces, fond gazes and hands held tight. It felt so good to meet nephews and nieces all grown up; I wouldn’t have recognized them from what I remember when they were little! And my three surviving aunts, all in their eighties now, blessed me as I kissed their hands. What a long-missed benediction! 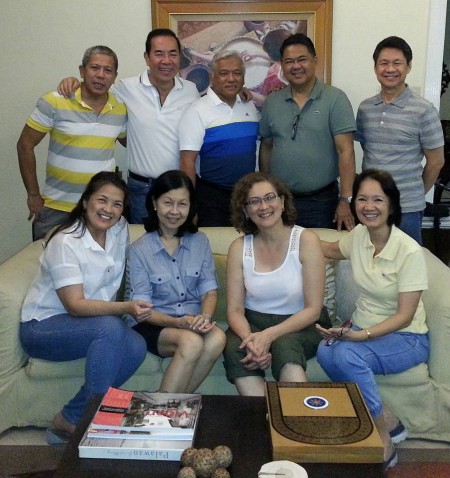 The following day, it was time to share dinner with members of our original Action Group, circa 1986, because our very first AGL was visiting. Although the talk was punctuated with herbal tonics and medication dosages, aching body parts and growing children (and grandchildren!), all of it was celebratory. We were simply joyful and thankful to be brothers and sisters for over three decades now! Such was the closeness sowed and nurtured in the BCBP from when we were young and wide-eyed. The years’ only giveaway was the absence of second servings, despite the tempting spread prepared by our host couple.

Finally, on the fifth Saturday of the month, our Baguio Chapter celebrated the Lord’s Day. We sang and praised God as we broke bread together.

There’s my point. My month of gatherings among family, friends and others just as near to the heart has been underlined by breaking bread. Indeed, in family life, in friendships and in community, the act of breaking bread is symbolic of many things. There is, of course, that Jesus asked us, on the eve of His Sacrifice, to do as He did in His memory. But even in that last supper, to share food was not all Jesus and His disciples did. As in all other meals they reclined for, they conversed – exchanging ideas and stories, remembering the past and contemplating the future, getting together, getting to know, getting closer. 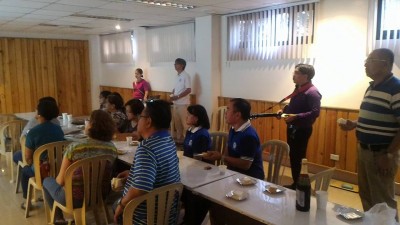 In all the breakfasts and lunches and dinners of my April, as I listened and spoke in turn, I was part of a history being woven together with kith and kin, a history which marches through time and space, connecting the participants for ever and everywhere. Even in the absence of words, as we exchanged gazes, be they teasing or impressed, frank or wistful, we were getting in touch with each other’s souls, our eyes being windows thereto. We paid compliments, we asked questions, we recounted experiences, we smiled and frowned and blushed, all along going deeper and deeper into the I-Thou of relating and connecting.

Given all this, despite my limited human perspective and understanding, I find it a small wonder that in the telling of Jesus’ life and resurrection, He very often used food or mealtimes to bless: He multiplied two fish and five loaves, He imparted lessons as Martha prepared His food, He asked for something to eat by the seashore, He allowed His disciples to glean off of wheat fields, He dined in Zaccheus’ house, He went without for forty days and nights, He became bread and wine for His disciples, and, in the breaking of the bread on the way to Emmaus, He opened himself to recognition.

Whenever we share meals with each other, we are recipient of God’s generosity and Jesus’ commission over and over again. As we gather to partake of nature’s yield, we become a church under the wing of the Spirit, gifted – in a very physical sense – with empowerment and transformation. As we are filled, we are sent to fill others by sharing of what has been given to us – whether it is time or wealth or service or consolation. Our breaking bread, in a very real sense, is Eucharistic: as we finish, we are sent from the gathering onto the world around us, channel as much as vessel of God’s love and peace in our hearts.

AGM: THE GOD IN OUR HEART AND OUR HOME