“The kingdom of heaven is like a treasure buried in a field which a person finds and hides again and out of joy goes and sells all that he has and buys that field.” Matthew 13:40

It is August 28, 2013 8 a.m.. I am sitting in a crowd in a ringside seat at the Fairmont Hotel not to watch boxers trade heavy blows but full of anticipation as to what His Eminence Luis Antonio Cardinal Tagle would dish out following an appearance at netizens “anti-Pork” outrage rally in Luneta otherwise known in social media as the Filipino ‘Million Man March”. But instead of launching fireworks and the like, headlines for tomorrow’s papers this humble persona brought the crowd of 1000 businessmen and professionals to the role of business in the world.

He started with a treatise on how business, properly done, impacts the quality of the human, his family, society and the nation. Having delivered such service, business on the other hand is benefited monetarily by its endearing customers. In this quid pro quo, the question is raised as to whether Jesus’ face can and will surface to be the true face of business in the Philippines. Can Jesus fit in this equation? 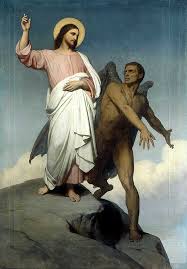 Cardinal Tagle goes back to the temptation of Jesus to show that it is the devil who first attempts to enter the picture to short circuit this quid pro quo. He offers Jesus his power to turn all the stones into bread, a short cut to bring all the people into Jesus’ side. “Enseymada! Pan de sal!” A tantalizing call to end all hunger, seemingly helpful, easy and ‘productive’. What was wrong with that?

As Jesus says, it was NOT God’s way. Therefore it would be harmful. Despite knowing that God’s way is longer and arduous it would bear much fruit more beneficial to all. No matter how much “produce” or profit the world may bring if it were gained not through God’s way would also fritter away. Not only is that true, the focus is also off.

What matters to God is the human spirit and not all the glitter that the riches that the world offers. No matter how ‘low’ the world sees the most insignificant human, ‘rejects’ lacking talent, education, drive, worldly success, the like, God will seek the spirit of that ‘lost sheep’, lost coin or prodigal son that the parables point to. Why? Because we ARE GOD’s. God chooses us. Every one of us! We all belong to him. That gives us a lot of hope.

Sometimes in the midst of all this upheaval with the ‘pork barrel’ excesses, lack of conscience, love for the poor and country, frustration, anger and helplessness seems to abound. But the Cardinal confidently says God is on the side of those who choose God’s way and God’s justice WILL prevail.

He calls us to integrity, both personal and institutional. He calls us to selflessness. Because when we are at the service of others we will be at our most energetic levels. He calls us to make a choice in reminding us that scripture tells us, “You cannot serve two masters.”

As a parting shot, he called us to reflect carefully on Matthew 13:40 of the person who finds a treasure in a field, hides it again and out of joy sells all and buys the field. Cardinal Tagle says that many persons after determining that no one else has seen them find the treasure, would simply bring that treasure home and have nothing to do with that field. He challenges us to FOCUS, why buy the field?

May I proffer my humble reflections.

As with earlier parables where Jesus speaks of the sower. God is the sower and the field is the world. We are his treasure. He sells all, as the prodigal Father, he loves us with unconditional love, not holding back anything. And in buying the field, he shows his universality, his catholic way, in loving each and everyone in the world. He showed his determination to face bankruptcy in selling all, offering the life of his very son, Jesus, as a sacrifice, to buy the field, to reach out to the whole world without any EXCEPTION, to gain that treasure, the pearl of great price,to receive the pure love of every human being created given up with FREE WILL.

To end, I offer another way of looking at it. We are the person who sees the pearl of great price, the treasure that Jesus is in this world, the field. Empowered by that treasure, the unconditional love of Jesus, we are called to buy the field. We are called to embrace the world and all that is in it as Christ calls us to preach the Gospel to all the ends of the earth, to all peoples without exception to race, color or creed. We are called to stay in field that we have bought with all its imperfections, allowing that treasure of God’s love to flow freely from us to sanctify the world, the field, to claim it for Christ.

We are called to selflessness, to empty ourselves, filling ourselves with Christ in order to remove obstacles, injustices, dishonesty, corruption, insects, weeds, wild animals that poison this field in the power of the Spirit, knowing fully that nothing can stand in the way of His great love.

CARDINAL TAGLE: PRODUCTIVITY, DEVELOPMENT MUST BE BALANCED WITH INTEGRITY, FAITH IN GOD

A HAPPY WIFE OR A HEALTHY WIFE ???

Jesus paid the ransom, He bought the field with all of us in it, with His own life, in humble submission to the will of the Father, and out of a deep LOVE for each one of us!

How can we not respond to this by offering our own lives in the service of His Name?

We must bring His face to shine through the world where we operate, so that we can bring the lost to the same awareness that God loves us all in the same measure.

God bless us all!

P.S. Bitin lang ako sa ending. I was expecting you would bring it back to the Cardinal. I was struck by the smile on the face of Cardinal Tagle. Now I know from where it comes from. It is Christ’s face that is juxtaposed in Chito’s smile. No wonder…