As I mature, AKA “get old” in the BCBP Community, Fr. Herb’s National Leaders Retreat becomes more interesting and more exciting. Why? You come to realize that you are still a beginner in spite of being blessed to attend 10 NLRs of Fr. Herb…..So much to learn and so much to discover.
Lord, thank you so much for BCBP’s gem – Fr. Herb.

Our topic on CATHOLICISM by Carl E. Olson and Rev. Robert E. Barron was divided into 10 DVD Episodes or Lessons. NOTE: you can order via the Internet your own set of the CATHOLICISM 10 DVD Copies and Workbook through “Word On Fire”.

My favorite from the 10 is Episode 8 or Lesson 8 on “The Communion of Saints”. After “munching and digesting” the Episode, I made a resolution to be a Saint, YES a SAINT.

By the Grace of God, I have already started by being a saint to my partner for life, my wifee, and my one and only BENGIE.

“The Communion of Saints” episode illustrated several saints who can serve as our role models. Fr. Robert Barron talks about St. Katherine Drexel, my role model saint, born in Philadelphia, USA on November 26, 1858. Her father was an internationally known banker and one of the richest men in America. Her mother died when Katherine was only 5 weeks old. She grew up loving her step mother. Katherine and her siblings were given the best education and several first class trips to Europe.

Her parents were devout Catholics. Her father spent a half hour daily in prayer in their chapel. He drilled (“binarena”) into his children’s tender minds that their wealth had been entrusted to them and was to be used for the common good based on the exemplary lives of Sts. Aquinas, Ambrose, and Chyrsostom.

Her father died when Katharine was 22 years old. She inherited $4 million or equivalent to $400 million to date…WOW. She decided to donate $1.5 million in building schools, hospitals, convents, and churches to the American Indian missions. She felt this was not enough and that much more could be done.

She visited Rome and knelt before Pope Leo XIII requesting for missionary priests and sisters to be sent to the Native Americans. The Pope told her…”Why not yourself become a missionary?” She accepted the challenge, joined a religious order and eventually formed her own religious community that focused on serving not only the Native Americans but also the African-Americans. She died at the age of 97 in March 3, 1955.

How can I be like St. Katherine Drexel? Definitely NO WAY will I inherit $$$$$$ from my parents.

BUT I can learn the virtues of being detached from $$$$$$ and by doing, by my actions. I can use my business experience in helping the marginalized sector of my beloved Municipality of Medina (4th class municipality of Misamis Oriental). I can apply the Wealth Creation principle of Prof. Ed Morato instead of the politicians’ Poverty Alleviation or dole out practice.

This reminds me of the red pocket book of Mao Tse Tung – “give a man a fish and he can have fish for the day (poverty alleviation). Teach him to fish, and he will have fish for the rest of his life (wealth creation).” 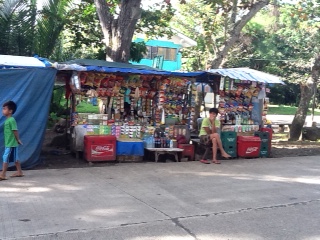 HOW have I applied this principle?

In January 2012, five women put up temporary-permanent sari-sari stores in the family vacant lot fronting the family resort – Duka Bay Resort. The women saw the OPPORTUNITY of making a livelihood without having the consent of the lot owners. As the administrator of the vacant lot, I had two options: first – demolish and assert no permission was granted; second – wealth creation by partnering with the enterprising women.

I took the second option. We agreed that a decent sari-sari store complex would be constructed and leased to them at Php 20 per day per stall rental, collected on a daily basis. An additional provision in the written lease contract agreement stipulated that no hard drinks or beer would be served in the vicinity. Rationale – presence of men drinking is a big turn off for the resort guests who would want to patronize their retail stores…resulting to no rental payment. 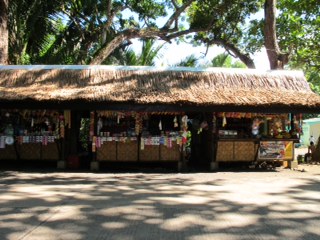 My women partners have religiously paid their daily rental since April 2012. By God’s Grace, I can recover my investment in April 2014.

The MANLY CHALLENGE – Social advocacy through WEALTH CREATION is rewarding for both the lot and sari-sari store complex owner and the retailers. Much better than just providing the retailers with mere poverty alleviation dole-outs!

HOW I HAVE LIVED MY NAME

A TIME FOR GIVING … AND SHARING YOUR...

THANK YOU DEAR GOD FOR MAMA