CBCP: STAND UP FOR THE CHURCH OF THE POOR

This sums up the plea made by the religious sector during the launch of the Years of Consecrated Life and of the Poor recently which prepare the Filipino faithful for the 5th centennial anniversary of the coming of Christianity to the country in 2021.

In his interview over Church-run Radyo Veritas, Fr. Dexter Toledo, executive secretary of the Association of Major Religious Superiors of the Philippines (AMRSMP), shared this season invites all Christians to remember that Jesus was born poor. 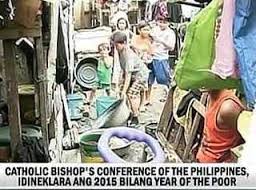 In order to realize this, Toledo urged each one has to do his part through works of charity, particularly to the less fortunate.

“If last [liturgical] year we paid tribute to the laity by inaugurating the Year of the Laity, this time we usher in the Church of the Poor,” the priest said.

“This means laity and clergy alike are to join forces, working hand in hand in bringing the Church closer to the poor because Our Lord Jesus Christ was Himself poor like so many of our people,” he added.

Themed “Bumangon at Manindigan” (Rise and Stand up), the year-round event is in line with the Catholic Bishops’ Conference of the Philippines (CBCP)’s declaration of 2015 as a time for the faithful to do their part in helping the poor, especially in pushing for and acting on the true alleviation, reduction, and eradication of poverty in the country.

The occasion, which comes third in the nine-year era of New Evangelization, prepares Filipinos ahead of the 500th anniversary of the coming of the Catholic Faith in the Philippines in 2021.

Fr. Luke Moortgat, CICM, head of Archdiocese of Manila’s YOP Committee, proposes to make it more concrete, focusing on those at the bottom of society who make up the lowest 25 percent of the population. 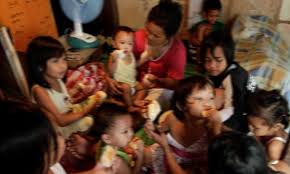 The priest noted although a family of five who live on P350 or less per day, or P70 each person per day, may be considered poor, in general, most of the poor are those with disabilities, particularly the mentally challenged, and others.

“While food and shelter are important, the first that the people need is respect. We know that Jesus has a special love and concern for the rejected, the ridiculed, the poorest of the poor. He asks us to do the same,” Moortgat stressed.

Attending to the poor

For the religious sector, the Year of Consecrated Life, with its theme “Prophetic Witnesses of the Gospel of Joy among the Poor” reaffirms their duty to proclaim God’s Word.

Toledo said the religious must take on Pope Francis’ challenge to be exposed to the reality of poverty, feeling what it means to have next to nothing.

In his 2013 apostolic exhortation “Evangelii Gaudium” (Joy of the Gospel), the Argentinian pontiff decries an excuse commonly heard in academic, business or professional, and even ecclesial circles that cannot attend to the poor allegedly because their lifestyle “demands more attention to other areas”.

“While it is quite true that the essential vocation and mission of the lay faithful is to strive that earthly realities and all human activity may be transformed by the Gospel, none of us can think we are exempt from concern for the poor and for social justice,” he writes. 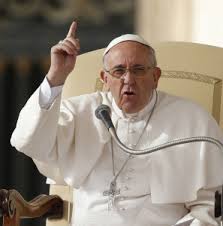 He expresses trust in the openness and readiness of all Christians, asking them to seek, as a community, creative ways of accepting his renewed call.

According to Pope Francis, the need to resolve the structural causes of poverty cannot be delayed because society needs to be cured of a sickness which is weakening and frustrating it, and which can only lead to new crises.

“As long as the problems of the poor are not radically resolved by rejecting the absolute autonomy of markets and financial speculation and by attacking the structural causes of inequality, no solution will be found for the world’s problems or, for that matter, to any problems. Inequality is the root of social ills,” he stresses. (Raymond A. Sebastián/CBCP News)