June is the month wherein we honor and celebrate fathers and Fathers Day. I am glad that there is a Father’s Day in the month of June. Way back when there was only a Mother’s Day in May, I always wondered what happened to the “fathers”? After all, we wouldn’t be here if it weren’t for our fathers!

Usual gifts to our fathers are neckties or a shirt, nice ballpens, a book like Chicken Soup for the Soul of Fathers, etc. Many years ago I pasted some Dear Abby letters in one of my scrapbooks … reactions from her readers to one of her Father’s Day columns. I would like to share some of them with you.

“Dear Abby: The week before Father`s Day, you wrote: “Don`t give Dad another tie, shirt or wallet; give him something he will cherish forever–a letter telling him how much he means to you.“ Well, I composed a letter on the bus to work that very morning, typed it on my lunch hour and mailed it to my father in a beautiful card that evening. I knew it would mean a lot to him, especially since he was in the hospital at the time. He died on July 5, and I`m so glad I wrote that letter. Now I can live with myself, knowing that he knew how I felt about him. Thank you so very much for making me put my thoughts of love and gratitude on paper. If this letter helps just one person to do what I did, it was worth writing.” –No Name

“Dear Abby: I am the most heartbroken person in the world. I could always find the time to go everywhere else, but never time to go visit Mom and Dad. They sat at home alone and loved me just the same. It`s too late now to give them those few hours of happiness I was too selfish and too busy to give. Now when I go to their graves and see the green grass above them, I wonder if God will ever forgive me for the heartaches I must have caused them when they were alive. I pray to God that those who still have their parents to visit, do so, and show their love and respect while there is still time, for it`s later than you think.” –Too Late

“Dear Abby: As a father, I made a lot of mistakes (my son is now 14), but I know I did at least one thing right, and I`d like to share it with you. When my son was 3 years old, I started giving him an allowance of 50 cents a week. There was one catch–he could spend 25 cents on anything he wanted, but the other 25 cents he had to put in his piggy bank. He could spend his piggy bank savings any way he wanted, but only after it reached $10.
“Each week he spent his 25 cents on candy and gum, but he never really thought much about his savings–until he got his first $10. When he realized what he could get if he saved up his money, he began saving all his allowance. Every year on his birthday, his allowance was increased 50 cents, so he had 25 cents more to save. Also the amount he had to save increased to more $10. He now has his first after-school job, and he`s saving for a set of drums and a school trip to France. I have never talked to him directly about the virtues of saving, but he saves money like no other teenager I know.” -Proud Seattle Poppa

Now let me share a few memories about my father, Jarvis Nathan Russell, and what I learned from him. 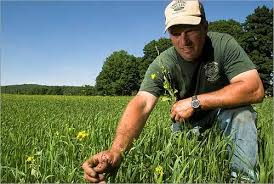 My father, a native of Vermont, The Green Mountain State, USA, was a true farmer, even as his father was before him. He shared with me his love for God in nature, in the mountains, woodlands, fields, flowers, the changing of the seasons. He taught me to love the land with all its beauty and ugliness, with its promise of harvest and the changing of seasons.

I had many chores around the farm, working after school and throughout the summer months. Although the work was hot, sweaty and constant, I enjoyed caring for the farm animals and being out in the fields with Dad, working side by side.

Dad taught me the value of hard, honest work, of doing the best one can whatever the job is small or big, of not only doing one’s best but seeking out creative ways to make one’s best even better. He was not a regular church-goer but he surely loved God and trusted Him to send the sun and the rain so that our crops would grow.

Dad had a wry sense of humor, too; he could find something to laugh about in most all circumstances. His temper flared when he got angry but he never raised a hand to us kids or to Mom; he would go outdoors and chop up wood for our furnace, or do some other physical task to work off his anger.

In other words, he was human with his good and not-so-good sides. As a father, he was the best one … at least to me. He was a man of few words but I know that he felt deeply about many things. I treasure my memories of him.

He died in the early ‘70s when I was already married and living in the Philippines. It was a shock to receive a telephone call from my mother saying that Dad had had a massive heart attack and died on the way to the hospital. I was devastated that I had not had time to tell him how much I loved him before he left us.

Please don’t wait until your father passes on to begin remembering the good things about him. Today, any day this month, or any/every day is the best time to tell him that you love him and appreciate the many things that he has done for you. No matter how strict or how much of a disciplinarian a father is, a father still wants to be loved. At least for this one month of every year we need to tell him in words and actions how much we love him. And try to repeat telling him you love him even if it isn’t Father’s Day… he is still your father every day of the year, isn’t he?

So, my friends, please hug your dad right now with a warm, heartfelt greeting: “Dad, I love you.” AND put it in writing … write him a letter for him to tell him how much and in what ways you love him. That letter is one that he will always treasure.