CHANGING THE FACE OF CDO POLITICS

BCBP Cagayan de Oro (CDO) did apply the BE HONEST motorcade and coordinated with the local PPCRRV in preparation of the incoming election. Both activities were ideal BUT not enough to make a dent on CDO’s current local government leadership of dole out, threat and intimidation.

Misamis Oriental Governor Oca Moreno, under the Liberal Party of Pnoy, challenged the UNA’s candidate and incumbent Mayor Dongkoy Emano. Oca Moreno’s six years as governor (2006 to 2012) allowed the province to receive foreign grants and outstanding awards for good governance unlike his predecessor, Dongkoy Emano, who served nine years as governor (1986 to 1995) and held the CDO Mayor’s position for nine years (1996 to 2005), then ran for a term as vice-mayor (2006-2009) and then the mayor (2010 to 2012). He was now seeking a re-election….. his daughter and the husband sought re-election as City Councillors, a son (3 termer and outgoing Congressman of Misamis Oriental 2nd District) was running for Governor……only in Philippine politics.

Both Mayoralty candidates’ platforms could be summarized as Patronage/Traditional Politics – “give him fish (dried/fresh/spoiled…does not matter) everyday” and Wealth/Opportunity Politics – “teach him how to use the fishing rod”.

Two of BCBP CDO East members joined the Team Oca Moreno, the challenger and “dehado” or the underdog. The two neophytes ran for councillors whose victory would be like ” a camel entering the eye of the needle.”
Both lost BUT the campaign exposure and hand shaking allowed their “faith to move mountains”.

Oca Moreno is CDO’s Mayor-elect with an 18K+ lead. How did he make it? BCBP CDO members are unanimous in their answer – Divine Intervention!

In the 45 days campaign period, Team Oca did not have the proper organization or the logistics to topple the incumbent. AMD Jong Tiro, a first degree cousin of Oca Moreno, and his four sisters ( two are BCBP members) with their spouses and children openly campaigned and took charge of the Team Oca headquarters. The eldest sister headed the Intercessory Prayer group and kept vigil on the eve of the election. 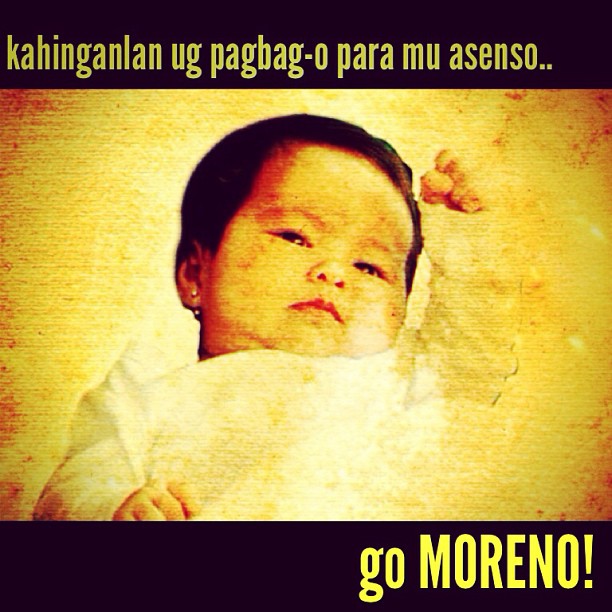 Beng and I decided to assist in the fund raising for Oca Moreno. Two of my daughters used the Face book in openly campaigning for Oca Moreno… check out the picture of my one-month old grand daughter with her clinched fist endorsing change under the Team Oca.

In the Think Tank of Team Oca, BCBP PSD for Mindanao Oca Salcedo strategized the campaign sorties. Some BCBP CDO members used the Xavier University Alumni Association (XUAA) in calling for a dialogue meeting with 2nd District Congressman/XUAA Rufus Rodriguez of UNA. The dialogue meeting zeroed in on Rufus. They ganged up on his being neutral for two elections and being indifferent due to party allegiance and alliance with Dongkoy Emano.

Strongly worded issues were used to awaken Rufus’ conscience:
“We were with you all the way in the two elections. This time we demand you be on our side for competent governance!” “You are selfish, you only think of your own welfare!” “If Oca loses in this election, we hold you personally responsible!”

After two days of soul searching and just a week before election, Rufus Rodriguez openly declared his support for Oca Moreno. He gave instructions to his leaders to support Oca Moreno and he abandoned Dongkoy Emano.

Clearly, God’s hand was at work to change the Face of CDO Politics.

The sweet victory is just the start for a better CDO. BCBP CDO will continue to be the catalyst of change….

YES – prayers and actions are needed to – CHANGE THE FACE OF BUSINESS WITH JESUS!

WHAT MAKES A DAD?

kudos and praises to BCBP CDO! this could very well a good start for a movement for “new politics” – BCBP way!
with my prayers and unity even at a distance.

God be praised! Kudos to BCBP-CDO! We are hoping that the new administration of Hon. Oscar Moreno will be able to prioritize the necessary structures, river development to address the flooding of our place in Rainbow Drive , Macasandig.